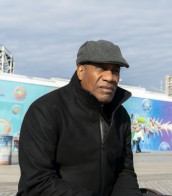 The actor talks about working on the new CBS comedy/drama 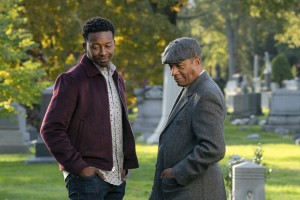 In CBS’s freshman Sunday night comedy/drama GOD FRIENDED ME, someone claiming to be the Almighty friends New York resident Miles Finer (Brandon Micheal Hall). Miles is an atheist, so he doesn’t believe the account belongs to God, but he can’t deny that whoever it is makes some very helpful suggestions about what Miles should be doing. Miles’ belief system and the sexuality of Miles’ sister Ali (Javicia Leslie) are both challenges for their very traditional father, Reverend Arthur Finer, played by native New Yorker Joe Morton.

Morton has just come off six years in his Emmy-winning role on SCANDAL as Rowan Pope, the definitely not-traditional spymaster father of Kerry Washington’s heroine Olivia Pope. Morton is also known for a multitude of other roles in television, films and stage, including BROTHER FROM ANOTHER PLANET, TERMINATOR 2: JUDGMENT DAY, EUREKA, THE GOOD WIFE and the JUSTICE LEAGUE movie franchise.

This interview includes both a one-on-one discussion and comments made by Morton during a Q&A session for GOD FRIENDED ME with fellow cast members Hall, Leslie, Violett Beane and Suraj Sharma, and executive producers Steven Lilien and Bryan Wynbrandt.

ASSIGNMENT X: Were you looking at any point to play a pastor?

JOE MORTON: No, it wasn’t on the wish list. I was really just simply looking for a character that was nothing like Rowan. It was a deliberate choice to find someone diametrically opposed to Rowan. I didn’t want to do the same thing all over again, not that I would ever be able to find such a wonderful character. This character is wonderful in a different way. The conflicts are really interesting. He’s a pastor whose son is an atheist and whose daughter is gay, both of which go against everything he believes in, and yet he has to find a way to hold on to love, loving both of them, and to continue their relationships and reconcile who they are.

AX: What is your character Arthur’s take on someone claiming to be God contacting his son Miles through Facebook?

MORTON: Well, one, [Miles] says it’s not God, and I have to sort of take him at his word. Also, I don’t believe that it’s God either. Why would God use social media? So I think the struggle for Arthur is more about, how do you deal with your atheist son when you’re a preacher? And how do you maintain the love between you and your son, even though his belief is diametrically opposed to yours?

AX: Arthur and Miles have been estranged. How does Arthur feel about that period in their lives?

MORTON: I think he thinks about it all the time. I mean, I think part of him has to think, “What did I do wrong as a father?” Because my wife died when he was a young boy, I’ve raised him pretty much on my own, so what did I do wrong? Same with my daughter. She’s gay, and for all of him wanting to be kind of the dad that accepts everyone, at the same time, it’s not what he would have wished. So I think he has to deal with, how do I reconcile who I am with who they are?

AX: Does Arthur have an opinion about Ali working in the psychotherapy field?

AX: Where do you shoot Arthur’s church?

MORTON: It is an Episcopalian church. It’s near where my girlfriend’s mother grew up on the Upper East Side. So right away, when I found that out, it had some history for me. So I’m going to explore the neighborhood and see what other old things I can find. But the church is gorgeous. It is one of the picturesque New York cathedral-like edifices. It’s wonderful.

AX: How would you describe GOD FRIENDED ME to potential viewers?

MORTON: The log line that I’ve been using constantly is that “You don’t have to believe in God to believe in good.” Also, you remember that movie THE DEVIL WEARS PRADA? It wasn’t a movie about the Devil wearing good clothes. It was a movie about something completely different. So I think it’s the same thing here. Just because God is in the title doesn’t necessarily mean it’s a show about God. It’s concerned with God, but not about God.

AX: Has there ever been an event in your life that felt like more than a coincidence that informs your performance in GOD FRIENDED ME?

MORTON: I don’t really believe in coincidence. I think that everybody up here [on the GOD FRIENDED ME Q&A panel] puts themselves on a path, and even for folks who are sort of moving through their lives recklessly and have not purposely put themselves on a particular path, when these remarkable, quote-unquote coincidences begin to occur, for me, it’s more a result of cause and effect. You put yourself on that path. You followed that path. And here you are.

AX: Besides playing someone different than Rowan Pope, is there anything specifically on your wish list?

MORTON: There is a book that I’ve read, written by Walter Mosley, that I’m hoping to do at some point. It’s a wonderful detective story. It’s not the Easy [Rawlins] character, it’s a completely different character. It’s wonderfully written. I’m hoping that maybe I get a chance to do that.