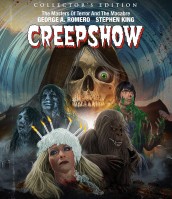 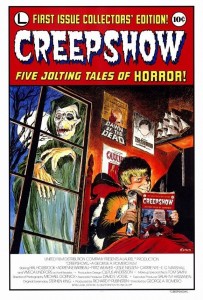 After assaulting audiences senses with his 1978 zombie masterpiece DAWN OF THE DEAD and taking a big detour with the action film KNIGHTRIDERS, director George A. Romero made his biggest leap into the mainstream with 1982’s now classic CREEPSHOW.

1982 was a good year for horror with John Carpenter’s THE THING, CAT PEOPLE, BASKET CASE and POLTERGEIST all making their debut among many other lesser known films (THE ENTITY and THE BEAST WITHIN to name a few).

CREEPSHOW was the capper to that banner year. Released in November, it boasted not only a major studio releasing it (Warner Bros.) but also had novelist Stephen King penning the original stories (which weren’t based on any existing short stories or novels) and grossed over $20 million during its theatrical run.

The end result was a loving anthology tribute to the E.C. comic books TALES FROM THE CRYPT, THE VAULT OF HORROR and others that Romero and King grew up with (there’s even a quasi-narrator in The Creep, that could be a dead ringer for The Cryptkeeper).

Whereas Romero’s other films had an almost eerie naturalism to them, Romero opted for heightened reality with at times over-the-top performances and a sharp contrasting color palette as backgrounds changed to exaggerated extremes when something horrific is about to happen. Romero was literally  bringing a comic book to life on the big screen and even used comic book panels as bridging moments for certain scenes to scenes and in between the stories as well. 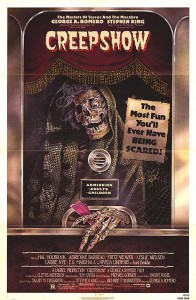 With five stories and a wraparound segment, it does take awhile before the movie really kicks into gear. The prologue follows little Billy (Joe King) whose dad throws away his CREEPSHOW comic book into the trash and which opens from the wind to reveal the first segment “Father’s Day.”

There’s not much going on with “Father’s Day” as it’s more of a character study of a group focusing on spoiled adult children gathering on the anniversary of the death of their horrible father only to be visited by his corpse. The pay-off is not very satisfying based on the drawn-out set-up, but it definitely evokes E.C. at it’s most cheeky.

“The Lonesome Death of Jody Verrill” actually stars King himself as a dumb hick who gets space goo on his hands from a downed meteor. Slowly everything surrounding the meteor grows this thick green moss and it overtakes Verrill too. Completely comedic and over-the-top, this segment is strange and funny but also has a decidedly effective creep factor as we watch down-on-his-luck meet his maker not because he’s a horrible person, but because he’s a moron.

“Something to Tide You Over” features the great pairing of Ted Danson just as CHEERS  was taking off and AIRPLANE!’s Leslie Nielsen when he could still get parts that weren’t deadpan comedies. Nielsen plays a jealous husband who gets revenge on his wife and the man she’s having an affair with (Danson) by burying them head up in sand near a beach. Nielsen has a grand old time and his plan is pretty disturbing resulting in some effective scares by the end.

“The Crate” is hands down the best and most fleshed out segments (also aided by its longer running time). Hal Holbrook plays the henpecked husband of Adrienne Barbeau and constantly fantasizes about ways to kill him. When his college associate Fritz Weaver invites him to witness a mysterious crate they found, they discover a bloodthirsty creature inside. It’s here Holbrook hatches a plan to fully rid his wife in glorious E.C. style. Everything about this segment is pitch-perfect including the great monster by Tom Savini (affectionately dubbed Fluffy by Romero).

Finally, there’s “They’re Creeping Up On You”, another creepy tale this time featuring E.G. Marshall as a nasty Ebenezer Scrooge-like germaphobe who lives in a perfectly sanitary, white walled apartment. And it’s not ghosts that pay him a visit — it’s cockroaches. The finale is gross, disturbing and if you’re afraid of insects, a demise that literally gets under your skin.

CREEPSHOW works on many levels and Romero is at the top of his game creating an utterly original and unique film to his cannon. It’s great to see him have the kind of money to experiment and try new things – some of which he never repeated in any film after this.

John Harrison also composed a memorable and spooky score that brings ambiance and a sense of fun to the proceedings.

Shout! Factory really outdid themselves with this release. Stateside, only a Warner Bros. DVD from 1999 was released (overseas, different companies have released Blu-rays since then), so this Blu-ray edition is long overdue. 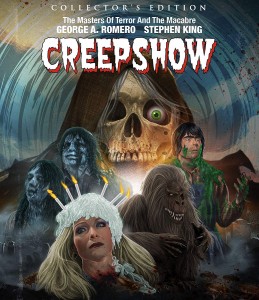 With a 4K scan of the original camera negative and color correction supervised by director of photography Michael Gornick (who went on to helm CREEPSHOW 2), the film has never looked better. The colors pop and are vibrant, showcasing the comic book come to life world Romero intended.

The special features are plentiful including three audio commentaries (an archival one with Romero and Savini, a new one with Gornick and one with Harrison and construction coordinator Ed Fountain).

Featurettes also include a roundtable discussion on the making of the film with John Amplas, actor Tom Atkins, Savini and actor Marty Schiff; a spotlight on costumer Barbara Anderson, animator Rick Catizone; the restoration of the film; an interview with sound re-recordist Chris Jenkins; and a look at the various posters; and a look back at the original props.

What’s most exiting though are the deleted scenes. There are numerous trims, extensions and other nice tidbits that were left on the cutting floor and they’re presented here for CREEPSHOW fans to comb over. There’s nothing too revelatory though. It’s obvious why the scenes and moments were excised, but it definitely feels out the comprehensive nature of the package.

The packaging itself is also elevated for a Shout! release. It features a hardbound box that houses the Blu-ray but also includes a nice thick 40-page booklet with an essay written by former FANGORIA editor Michael Gingold on the film.

CREEPSHOW has been one of those long-desired Blu-rays and it’s amazing to see Shout! release with all these bells and whistles. It’s also another reminder what a bold and original filmmaker Romero was. While his contemporaries John Carpenter, David Cronenberg and Joe Dante quasi-embraced the studio system shortly after their low-budget successes, Romero continued to stay true to his independent roots even when the studios did take a chance on him (MONKEY SHINES and THE DARK HALF).

I also wish CREEPSHOW was treated better as a franchise. Aside from 1987’s adequate CREEPSHOW 2, the film has been treated to a subpar CREEPSHOW 3 and a web series. Here’s hoping the TV show, to be executive produced by CREEPSHOW fx artist and THE WALKING DEAD executive producer Greg Nicotero brings the franchise back to its creepy, gory and comic-book-like roots. For now, we have the ultimate presentation for the ultimate horror anthology film.

Super Bowl Commercial Review: TRANSFORMERS: DARK OF THE MOON trailer (...
TV Review: ONCE UPON A TIME - Season 2 - “We Are Both”
TV Review: BONES - Season 8 - “The Bod in the Pod”
TV Movie Review: SHARKNADO