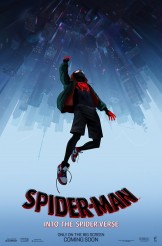 Movie Review: SPIDER-MAN: INTO THE SPIDER-VERSE 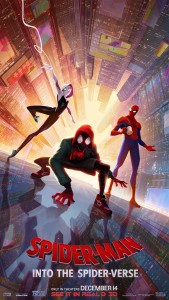 Even for the possibly slightly SPIDER-MAN-weary amongst us (seriously, how many times can this specific superhero franchise be sequelized/rebooted in under two decades?), the animated SPIDER-MAN: INTO THE SPIDER-VERSE is irresistibly inventive, funny and fun. The movie is meta without puncturing its own bizarre multi-verse reality, incorporates multiple styles of animation seamlessly, and even has Easter eggs that will reward sharp-eyed and/or repeated viewing: you wouldn’t want to miss that billboard for FROM DUSK TILL SHAUN, would you?

SPIDER-MAN: INTO THE SPIDER-VERSE begins as most post-origin SPIDER-MAN stories do, with Spider-Man (voiced by Chris Pine) giving us a quick recap on who he is and what he does and what he these days takes for granted. So far, so not new. Fortunately, this seems to take under a minute. We’re also following smart, artistic New York teen Miles Morales (voiced by Shameik Moore). Miles’s supportive parents, police officer dad Jefferson (voiced by Brian Tyree Henry) and nurse mom Rio (voiced by Luna Lauren Velez), have enrolled him against his will in a school for the gifted. Miles would rather be out tagging with his cool uncle Aaron (voiced by Mahershala Ali). Then Miles gets bitten by a radioactive spider and finds he’s got powers he doesn’t want. And then Miles meets Spider-Man and finds a potential mentor, albeit briefly. A project by the malevolent Kingpin (voiced by Liev Schreiber) opens portals to multiple universes, causing a bunch of Spider-People from other realms to drop into ours. This gives Miles a potential peer group, if he can just get out of his own way and be the Spider-Man his own universe needs.

We can sort of tell where SPIDER-MAN: INTO THE SPIDER-VERSE is going in general plot terms, but how it gets there is everything. The film, directed by Bob Persichetti & Peter Ramsey and Rodney Rothman from a screenplay by Phil Lord & Rothman, employs a variety of visual styles to be true to each of the Spider-People’s home worlds (or home graphic novels), going so far as to use subtle pointillism of traditional comic book pages on many sequences. We also get onscreen captions of words that would normally be found in comics – “Aaiiieeee” and the like – multi-panel frames, jagged bright colors surrounding explosions, and other elements associated with print graphics. In short, the movie is a love letter to all things comic book, especially SPIDER-MAN. What makes it great is that it never takes anything for granted. The movie always has an insight, a quip, a surprise, something moving or all of the above swirling before us. It even manages to recap all of the origin stories in ways that entertain rather that just reiterate.

Spider-Man as a character lends himself more readily to this type of gentle self-lampoon than other superheroes. Yes, SPIDER-MAN: INTO THE SPIDER-VERSE is brought to us by a lot of the same folks involved in THE LEGO BATMAN MOVIE. In the latter, the main character’s notorious seriousness was perpetually lampooned, because he has no sense of self-awareness in his brooding. He’s just not going to laugh with us. Here, nobody sends up the essence of Spider-Man, whose sense of humor about himself is part of his persona. The jokes are about form and detail and, of course, how all the different versions do and don’t resemble one another.

The voice cast is excellent, with Lily Tomlin’s wry Aunt May a standout. The musical choices are equally apt.

SPIDER-MAN: INTO THE SPIDER-VERSE is that animated comics superhero movie we didn’t know we wanted. It’s an astute critique of both comic book mythos and animation that simultaneously displays many different facets, illustrating why all are worthy of our affection.