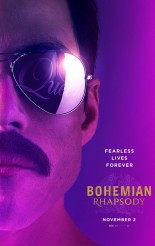 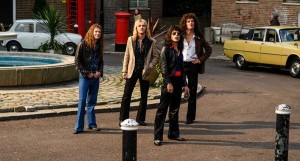 BOHEMIAN RHAPSODY is a story of Freddie Mercury, and the band Queen, in that order. Whether it’s the story of the late rock star and his still-living band mates seems open to question. There is no doubt, however, that BOHEMIAN RHAPSODY is worth seeing. Rami Malek channels something akin to divine ecstasy when he is playing Mercury on stage. The performance captures Mercury’s charisma and sense of daring invention. More importantly, Malek exudes such absolute joy in these moments that it’s hard not to share it. The emotion radiates off the screen and onto the viewer.

Freddie Mercury was born Farrokh Bulsara in Zanzibar. After a brief prologue, BOHEMIAN RHAPSODY introduces us to Freddie as a young man working as an airport baggage handler, being subjected to racist taunts (for the wrong race, at that). We see that Freddie’s parents, who moved the family to England when he was a child, don’t approve of his artistic ambitions. Freddie offers some songs and gives a parking lot audition to the two remaining members of Smile, Brian May (Gwilym Lee) and Roger Taylor (Ben Hardy), just after their bassist has left for greener pastures. Freddie can’t play bass, but he’s got an extraordinary voice, he’s got a gift for songwriting, and he’s a good pianist as well. In short order, the band acquires bassist John Deacon (Joseph Mazzello). At Freddie’s insistence, the group changes its name to Queen, and start doing very well on the English college and club circuit.

During this period, Freddie also meets and falls for Mary Austin (Lucy Boynton), a beautiful and supportive young woman. They move in together. Then the band gets some interest from managers John Reid (Aiden Gillen) and Paul Prender (Allen Leech), who get Queen a meeting with a big record company, headed by Ray Foster (an unrecognizable Mike Myers). Greater success proceeds from here. 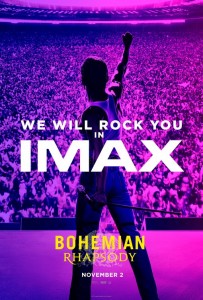 The highlights of BOHEMIAN RHAPSODY are all the performances (lip-synched to perfection) and the behind-the-scenes creative sessions. It’s fun to see May come up with the stomp-stomp-clap of “We Will Rock You” and the tape-threatening recording of the title song, and we do get an idea of the various band members’ creative instincts and ways of teasing one another.

On the personal and professional fronts, BOHEMIAN RHAPSODY is on shakier ground. Surely other movie biographies of rock stars have taken greater liberties with timelines and the facts (which are readily available all over the Internet). However, what we get from Anthony McCarten’s script (from a story he co-authored with Peter Morgan) under Bryan Singer’s direction is something that feels dramatically like a well-intentioned TV movie of the week from the era of Queen’s heyday. Without more explanation than we get here, it’s hard to understand why, after Freddie and Mary split as a romantic couple, she agrees to move in next door (in reality, she was employed by him). It’s even harder to understand exactly what’s going on with Freddie sexually, since here he’s depicted as fairly passive. This is hard to reconcile with either the real Mercury’s public persona or even the onstage version that we get from Malek. If BOHEMIAN RHAPSODY wanted to investigate this seeming paradox, that could be interesting, but what we get is Freddie looking with some longing at some well-built men and Mary (who isn’t even there at the time) deducing that he’s gay, with not much in between. We then see Freddie being lonely at parties thrown at his home, and finally, a (very brief onscreen) successful search for true love. We don’t actually see him partying.

For that matter, we don’t see the other members of Queen doing anything more risqué than drinking. Yes, May, Taylor, and Deacon are all still alive; further, May and Taylor are credited producers on the film. It’s understandable that they’d rather not be shown doing anything that’s embarrassing, and fair enough. However, the absence of even a hint of wildness on the part of any members of Queen except Freddie creates a context that seems unlikely on the face of it, with Freddie as the only one acting out at all.

Then there is what happens with Queen and Freddie professionally. Paul Prenter (played here by Allen Leech) is now deceased. If Prenter indeed said and/or did some of the things he’s quoted as saying/depicted as doing here, he was indeed a jerk. Even so, it seems a bit much to blame him for almost destructive thing that happened, more so when it’s hard in the film to figure out exactly what’s going on between him and Freddie. Prenter was Freddie’s – as opposed to Queen’s – manager, but it’s hard to work that out from what we’re given here. Given the animosity Freddie shows toward Prenter, it’s even harder to work out why the rocker, who surely had choice in the matter, let Prenter influence his career.

It makes sense that director Singer, who is known for his superhero movies (X-MEN, SUPERMAN RETURNS, etc.), is at his best with the scenes of spectacle. We feel like we’re in the room as the songs are being written, in the audience as they’re being performed, or best of all, part of the band as they put forth their music to the world.

So on the one hand, we’ve got a muddied, even tame dramatic story. On the other hand, we’ve got sheer glory in the creativity and performance of Queen, as brought to us by the filmmakers, Lee, Hardy, Mazzello, and most of all Malek. Glory wins out.