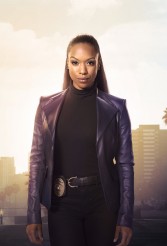 The actor talks her detective role on the series 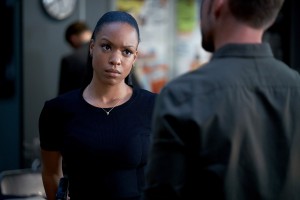 In Season 3 of Fox Network’s LETHAL WEAPON on Tuesday nights, Michelle Mitchenor’s character, detective Sonya Bailey, is getting a new partner. Louie “the Gute” Gutierrez will be introduced in Season 3’s sixth episode, and is reported to be something of a wild card. Meanwhile, Bailey and the rest of the squad are still getting to know former CIA operative Wesley Cole (Seann William Scott), who is now partnered with Detective Roger Murtaugh (Damon Wayans), following the death of Murtaugh’s previous partner Martin Riggs (Clayne Crawford).

Mitchenor, whose other credits include in Spike Lee’s CHI-RAQ and the series BLACK BOOTS, catches us up on Bailey so far.

ASSIGNMENT X: Did you study police work at all to play Detective Bailey?

MICHELLE MITCHENOR: I don’t know if I should say this on the record – not necessarily [laughs]. However, what’s so great about our show is, we always have people on set who are coaching us through what LAPD officers do, and what a lot of the acronyms mean, and all of that, so when I got hired, I pretty much had to jump into it the next day. So I spent my time studying, “Okay, well, let me watch this pilot that they just gave me and try to understand who I’m about to be working with,” and all of that. But any type of police terminology, or anything I need to know, they always have people on set with us to make sure that we’re good.

AX: Have you done a medical show or a legal show, where you have to spew out profession-specific jargon?

MITCHENOR: No. This is my first time having to do that. As Detective Bailey, I do a lot of the exposition, so I’m putting together all the clues for the crimes, and I have to spit it out, but still be cool and edgy and fun. It’s been fun, though.

AX: Did the stunt coordinator or somebody show you how to shove a suspect into a police car?

MITCHENOR: Yes. They absolutely do show us, but I also started studying privately doing stunt work, because I’m on this cop show, just in case they wanted me to hop in there. And luckily, I did that, because [Bailey got into the physical action].

MITCHENOR: LETHAL WEAPON, for sure. I didn’t grow up on it, because I was young when they started coming out. However, Damon Wayans – IN LIVING COLOR is such an iconic show. That was in my household the entire time that I was growing up. So I absolutely knew who he was. And of course, everybody knows Mel Gibson and Danny Glover, so I was just like, “Oh, they’re making this into a TV show. Cool, why not?”

MITCHENOR: Oh, my God. Can we just say on the record I would love it if Danny Glover was my dad or something, or maybe he’s Murtaugh’s dad. I would just love it if he was in just one episode. I think it would be great. And seeing the fact that we’ve taken the show and we’ve made it our own, and I don’t think that we disrupted the legacy that the movies already created, it would be amazing if they came onto the show. 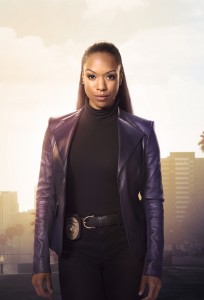 AX: In what we’ve already seen, do you have a favorite scene or a favorite episode for Bailey?

MITCHENOR: That’s so tough. [The Season 2 episode “Double Shot of Baileys,” in which] you get to meet someone from my family, and you get to learn a little more about my back story, you get to see where I live, you get to see her in a completely different way that you’ve seen her for the entire series. Honestly, I think just the moments where I’m with Murtaugh, are always so fun to me, because on set, [Wayans] always makes me laugh, and I’m supposed to be Detective Bailey, serious. And it’s so hard for me to stay serious. So all of those moments that I get to play are so fun for me. I can’t pick one in particular.

AX: How does Bailey see Murtaugh?

MITCHENOR: Murtaugh is her mentor, but she sees how so not funny and cool he is, so she kind of just laughs at how hard he tries.

MITCHENOR: I was the lead in [an episode of] an anthology series called TALES. It came out on BET. My episode was called “Trap Queen.” It’s now streaming on BET on Demand, so that went really well. I have my foundation, the Mitchenor Foundation, I work with a shelter down on Skid Row. We provide free art camps for the kids who are living in the shelters, so they get to learn how to dance and act and sing and do a lot of different things that involve the arts. TheMitchenorFoundation.org. It started in Uganda, and now I’m here in Skid Row, and I plan to go to a lot of different underdeveloped communities. TheMitchenorFoundation.org, you can learn about everything that we’re doing and will continue to do in different communities.

AX: And what would you most like people to know about this season of LETHAL WEAPON?

MITCHENOR: It goes deep, and it goes dark. But we’re still going to make you laugh.