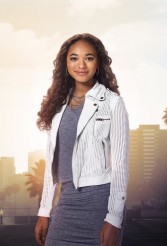 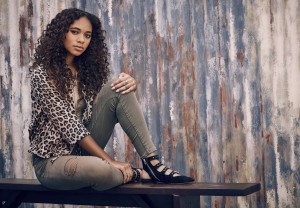 Fox Network’s LETHAL WEAPON, now on Tuesday nights in its third season, is based on the hit film franchise (four films made between 1987 and 1998) about two LAPD detectives, staid family man Roger Murtaugh and his suicidal daredevil partner, Martin Riggs. The tone of the show is action/comedy/drama, but conflict got heavy behind the scenes toward the end of Season 2, resulting in the dismissal of Clayne Crawford, who played Riggs.

Kinney previously had roles in BATTLEFIELD AMERICA, AMERICAN HORROR STORY, THE HAUNTED HATHAWAYS, and K.C. UNDERCOVER. She says she is delighted to be portraying the daughter of a character played by Wayans.

CHANDLER KINNEY: I was obviously aware of Damon Wayans and his comedic genius before the show. I think he’s such a huge force in this industry. I actually had never seen the films, since they came out before I was even alive. But my mom and my dad had obviously seen them and so when I went in for my callback, it was with [LETHAL WEAPON TV series creator] Matt Miller and [executive producer] McG, who directed our pilot. They were like, “Go home, watch the films.” And I did, and I immediately fell in love with them, because they’re the perfect blend of what I like in films, because you have the comedy, but you also have the drama and the heartfelt moments, all mixed together with awesome action. So I was really excited to be a part of it.

ASSIGNMENT X: In the later LETHAL WEAPON movies, Riana starts having romantic entanglements that affect the plots. Is that true on the series as well?

KINNEY: My Riana, she’s much younger [laughs], so the things she’s dealing with are completely different than some of the things that the other Riana did in the movies. But she’s still very relatable as a teen, and also, I think our show has a little bit of a younger audience, compared to the movies, because I know plenty of teens that actually watch our show, and love it. So I think she’s become a relatable character in that aspect, because she does go through a lot of the things that an average teenager goes through, so people can kind of identify with her in some of the things that she’s going through. 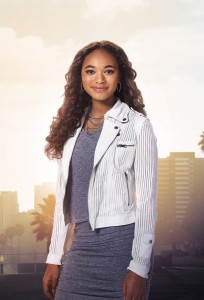 AX: What would you say Riana’s progression has been over the course of LETHAL WEAPON so far?

KINNEY: There’s a great dynamic between Damon and I on the show. It’s definitely changed and evolved from the first season to the second, and I feel like now, with her growing into herself a little bit more, she’s a little bit more mature, a little bit more aware of her actions and the repercussions, so she kind of has to re-find her place within the family, and especially with that relationship that she has with her dad. And so I think viewers see a lot of that, with her and her dad bumping heads so much, because she really does find pleasure in pushing her dad’s buttons. But they continue to work that out and become closer. So people get to see more of them.

AX: What’s the dynamic like with Keesha Sharp, who plays your mother?

KINNEY: Keesha is one of the sweetest people that I’ve ever met, she’s a lovely human being, and getting to play her daughter has just been so much fun. Our dynamic on the show is, Riana’s definitely closer with her mom. Riana and Trish kind of team up on Dad sometimes, so that’s a fun dynamic to play, but overall, I think she relates to her mom a little bit more. Roger tries to get in and do the right thing, and he’s trying to be the cool, hip dad, and be a little bit more relevant with everything that’s going on in her world.

AX: How old is Riana meant to be now?

AX: If you’re a little older in real life than Riana, are you drawing on your own high school memories?

KINNEY: Yeah. I’m [a year older than Riana], so we’re kind of in the same spot with a lot of the same things that we’re dealing with. She pushes the envelope a little more than I do. I like to think that I’m a better student, a more obedient child, all in all. But yeah, I definitely pull from my own life, and especially a lot of my friends, and some of the things that they’re dealing with in their lives, I pull from that. And because I am still in high school, I have that grasp of knowledge of what is going on in the teen world today. And the things that interest us, and I guess upset us, and things that make us tick, I have an understanding of that, because I am a teen, and we basically are the same age. She’s one year younger than me.

AX: It seems like a lot of times, in TV action shows like LETHAL WEAPON,, sooner or later, everybody gets kidnapped. So have you done any kind of physical training, in case you have to get thrown around or hit somebody?

KINNEY: Well, I’m actually a first-degree black belt, so I was thinking – I told Matt this many times – that Riana should be involved in some action. And if that happens, I’m so ready for it. And I’ve also been a dancer for twelve years, so I consider myself to be pretty athletic. But I haven’t done anything officially through the show. But when I do – I’m going to say “when,” not “if,” I’m putting it into existence [laughs] – when I do, I will be one hundred percent ready for it. And our stunt team is amazing, because Tim Truller does all of our stunts. He’s amazing, a wonderful person, and he’ll be right by my side when I finally get to be involved in some action outside of the house.

AX: Not asking for spoilers, but in what we’ve seen already, do you have a favorite scene or favorite episode?

KINNEY: Oh, definitely the episode “Flight Risk,” when I get arrested. That’s my favorite episode. First of all, that was my first time filming in the bull pen, and I’m great friends with the whole cast, but I don’t get to work with them [in many scenes], and I got to work with Michelle [Mitchenor], who plays the lovely Detective Bailey, and I got to work with Andrew [Creer], who plays Detective Bowman. So it was nice being a part of that world. And also, playing that story with Damon, we had so much fun yelling at each other [laughs], and there was a lot of growth in that particular episode for Riana, and I’m excited to see how that’s going to evolve.

AX: And what would you most like people to know about LETHAL WEAPON?

KINNEY: You need to watch it. It gets darker – there are some darker themes – but I think that adds to the show, it adds to the dynamic, and I think the Number One thing that people should know is that, because LETHAL WEAPON is a TV show now, we have the time and we’re allowed that time to dive deeper within our characters, so there’s a lot of soul-searching for a lot of the characters in this season. So it definitely gets deep for everyone, and everyone has had that opportunity to really explore deeper. So that should be reason enough to watch it [laughs].