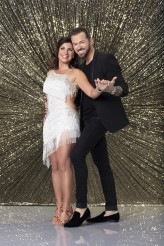 DWTS: 27 - Right off the heals of NY night comes Vegas night with the couples dancing again and Danielle Umstead & Artem Chigvintsev calling it a night. 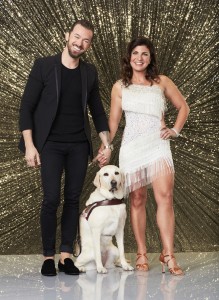 DANCING WITH THE STARS: Season 27: Week Two, day two was more like a whole other episode than a results show. All the couples danced again, scored again and were voted on… again. Unfortunately, the votes were not in favor of Danielle Umstead & Artem Chigvintsev. The couple were the second to be eliminated for the season. On the top of the leaderboard were the same three couples from the night before including Milo Manheim & Witney Carson, Tinashe & Brandon Armstrong and Juan Pablo Di Pace & Cheryl Burke. All received 26 points both nights, ending the week with 52 out of a possible 60. Bobby Bones & Sharna Burgess and Joe Amabile & Jenna Johnson are struggling at the bottom but next week is a new dance and a new chance for all, stay tuned!

Alexis Ren (model) and Alan Bersten
Looks like a pro. Inaba said she lit up the stage. Goodman said she worked her assets off in her Salsa. Tonioli called her bootylicious.
Scores: Inaba – 8, Tonioli – 8, Goodman – 8, Harland – 8

Mary Lou Retton (retired Olympic gymnast) and Sasha Farber
Cute as ever! Inaba told her she nailed her Samba. Goodman said he wished everyone would come out and dance like her. Tonioli said it was a great party number.
Scores: Inaba – 8, Tonioli – 8, Goodman – 8, Harland – 8

Milo Manheim (actor) and Witney Carson
So on it! Inaba said he had great range. Goodman told him his butt stuck out. Tonioli said he was on fire with his Tango.
Scores: Inaba – 9, Tonioli – 9, Goodman – 8, Harland – 9 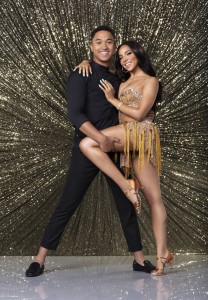 Joe “Grocery Store Joe” Amabile (reality star) and Jenna Johnson
Uncomfortable. Inaba said he was off tempo. Goodman said he did a good job in his Jazz routine. Tonioli said for him to come out of himself.
Scores: Inaba – 6, Tonioli – 6, Goodman – 6, Harland – 6

John Schneider (actor/singer) and Emma Slater
Not a lot of Jive. Inaba said to watch his arms. Goodman said he did a great job in his Jive. Tonioli called it fun.
Scores: Inaba – 7, Tonioli – 7, Goodman – 6, Harland – 7

Who Went Home: Danielle Umstead & Artem Chigvintsev
Who Has Legs to Take Home the Mirror Ball: Tinashe has the most natural ability but Juan Pablo has sex appeal. And Milo has the youth appeal!