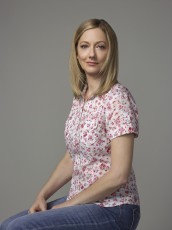 The actress talks about the quirky new series 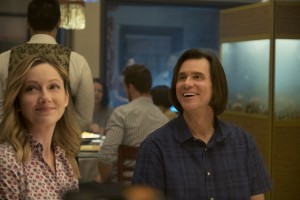 In Showtime’s new series KIDDING, now in its first season on Sunday nights, Jim Carrey plays beloved children’s TV host Jeff Pickles. Jeff’s gentle imagination has served him well in his puppet-populated show, but he’s coming unraveled after a tragedy, alarming those around him.

Judy Greer plays Jeff’s ex-wife Jill, who is coping with their shared sorrow in very different ways. She’s nonplused when Jeff moves into the house next door to her.

Greer, a native of Michigan, is having a big year on the big screen. She reprised her role as the Paul Rudd character’s ex-spouse in ANT-MAN AND THE WASP, she’s in the thriller DRIVEN, and she can currently be seen as the Jamie Lee Curtis character’s estranged daughter in HALLOWEEN. On television, Greer continues to voice characters on the long-running animated series ARCHER and AMERICAN DAD, as well as the title role in the new LUNA.

ASSIGNMENT X: You do a lot of voice work for animation, and you did motion-capture performance as a chimpanzee for the PLANET OF THE APES films, and this year, you have HALLOWEEN. Was one of the attractions of KIDDING that you could appear on camera, but maybe not have to run and get covered in blood or motion-capture dots?

JUDY GREER: I’m pretty much fulfilled here on KIDDING. I’ve gotten a lot of amazing scenes – [series creator Dave Holstein] has been writing some amazing scenes for me, and I get to work with these incredible actors, and I haven’t gotten one bruise on the set of this movie, or lost my voice [laughs]. So I’m happy as a clam. I’ve just been blown away by this character with every new script that came in my inbox. I was so excited to not be on the telephone in the kitchen all the time, saying, “Where are you? And when are you going to be home?” Which is what most of my roles seem to be, or at least a lot of what I’m reading. I was excited to play a character whose heart was breaking, and who was consumed with guilt and fear of this new version of her life, and how to find courage to get up every morning, and still be a mother to her son, and somehow navigate through a sticky relationship with her ex-husband. I just thought there was so much there, and I was really honored to be given this role.

AX: Catherine Keener plays Jeff’s protective older sister Deirdre. Do you feel like your characters have much in common besides the connection to Jeff?

GREER: I think in this first season, both of our characters are really gaining some autonomy. I think that’s a journey that we are both taking, discovering who we are separate from these men that we have attached ourselves to. And we don’t have a lot of scenes together to talk about it, but it does seem like that’s one journey that we are both taking, is experiencing life sort of separate. At least I know for Jill, it is the first time in her adult life I think she’s really separate. She’s separated from her husband, but she’s also learning who she is away from him and finding out at this age, “Who am I, without this man?”

AX: Any thoughts on the upcoming midterm elections?

GREER: Just in general, voter turnout in this country, I think we could all improve upon.

This interview was conducted during Showtime’s portion of the summer 2018 Television Critics Association (TCA) press tour.