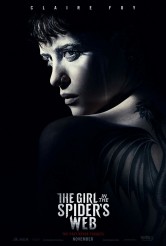 Movie Review: THE GIRL IN THE SPIDER’S WEB

A good character in an okay thriller 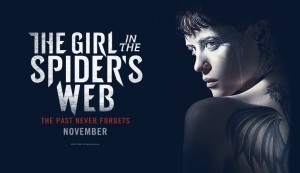 THE GIRL IN THE SPIDER’S WEB: A NEW DRAGON TATTOO STORY is a continuation of the Lisbeth Salander saga. The movie is based on the novel of the same name by David Lagercrantz. That novel was in turn based on THE GIRL WITH THE DRAGON TATTOO trilogy of books by Stieg Larsson, who died in 2004, before any of the works were published. They went on to become best-sellers. All three were adapted into films in their native Sweden. In 2011, director David Fincher and screenwriter Steven Zaillian adapted the first novel as a Sony/Columbia major studio English-language release, starring Rooney Mara and Daniel Craig.

Larsson’s estate joined with Lagercrantz to keep the series alive, and his novel THE GIRL IN THE SPIDER’S WEB was published in 2015. This too became a best-seller. Now director Fede Alvarez and his co-scenarists Jay Basu and Steven Knight have used that as the basis of this new film.

Why is all of this history relevant? For starters, it’s because THE GIRL IN THE SPIDER’S WEB is one of those movies that feels like it’s halfway between standalone and sequel, not able to fully commit to being one or the other. On one hand, Alvarez and company do a reasonably good job of keeping us interested in what’s happening. Based on the synopsis of the novel on Wikipedia, the filmmakers seem to have made a lot of changes. On the other hand, for viewers who come in cold, not having previously read or seen anything about Lisbeth Salander, some elements are going to be baffling.

Lisbeth, played here by Claire Foy, is a Swedish topnotch computer hacker. In her off hours, Lisbeth is a vigilante who punishes men who abuse women, eating them up physically and ruining them financially. Lisbeth is approached by Balder (Stephen Merchant), who has developed a computer program for the American National Security Agency and now wishes he hadn’t. The program can give a single user the power to find and use the launch codes of nuclear warheads all over the world. Before we can ask, “Why the hell would you do that if you’re a pacifist?”, Lisbeth has agreed to steal the program back for him. Not too surprisingly, other people are after the program as well, and some of them are pretty nasty customers.

Due to the doomsday maguffin, lots of cool vehicles and Lisbeth’s intense fighting abilities, THE GIRL IN THE SPIDER’S WEB sometimes feels rather like a James Bond film with a more serious protagonist. Foy does justice to Lisbeth’s wariness and ferocity. Her capable toughness feels authentic, not forced, and we believe her when she allows some emotion to rise to the surface. It helps greatly that Foy doesn’t appear need to signal traditional femininity in the way that some female performers tend to do in this type of role. She’s intriguing, she’s sympathetic in a cranky way, and for much of the film, we’re invested in her adventures.

However, THE GIRL IN THE SPIDER’S WEB eventually stretches itself too far, springing what are meant to be crucial emotional revelations on us late in the running time. They aren’t set up properly, so the payoff doesn’t resonate.

Alvarez knows how to set mood and atmosphere. The movie is all whites, grays and blacks with some browns and blues. There isn’t a trace of green anywhere, and when red shows up, it draws focus as it’s meant to do. He also stages some good fight scenes and vehicle chases.

THE GIRL IN THE SPIDER’S WEB starts off better than it ends. It holds your attention for the most part, though its plot winds up not serving its hero as well as it should.