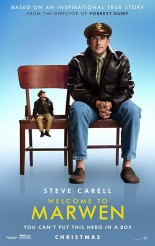 WELCOME TO MARWEN is the story – sort of – of real-life artist Mark Hogancamp. In 2000, when he was thirty-eight years old, Hogancamp was set upon and beaten by five men. Hogancamp was injured so severely that he was in a coma for nine days. When he woke, his brain damage was such that he had no memory of most of his life before the attack.

Unable to return to his old life, or to afford therapy, Hogancamp began an art project in his backyard, building a WWII-era Belgian town he dubbed Marwen (eventually Marwencol, as it is better known). He populated it with a variety of dolls and action figures that he modified to look as realistic as possible, then put them into tableaus which he photographed. Some of the photos have subsequently been mistaken for images of real, living people.

Hogancamp and his work have been the subject of a documentary film, a book, and many articles. Now director Robert Zemeckis and his co-writer Caroline Thompson have made a drama, WELCOME TO MARWEN, from the source material.

First, the good news. Anybody who’s interested in visual effects and motion capture will have to see WELCOME TO MARWEN. Zemeckis and his team, including miniature effects supervisor Dave Asling, digital makeup designer Bill Corso, and visual effects supervisor Kevin Baillie, do things that simply have not been done before. Whereas most of the human characters done in CG have realistic-looking skin but dead eyes, the ones in WELCOME TO MARWEN have deliberately plastic-seeming skin with completely live eyes. The effect is astonishing, no matter how many times we see it over the course of the film.

Why exactly are we seeing this effect? In WELCOME TO MARWEN, Hogancamp (played by Steve Carell) envisions the dolls as living people. Captain Hogie (also played by Carell) is his Marwen-town alter ego, an Allied commander who is the target of multiple Nazi attacks. Luckily for Hogie, the women of the town – all patterned after friends who are in his life – have his back and are heavily armed.

WELCOME TO MARWEN goes back and forth between Hogancamp’s real life, where he’s struggling with whether or not to attend the sentencing hearing of his attackers, and his imaginative life in Marwen. This in itself isn’t a bad notion, and of course it enables the aforementioned incredible effects.

However, one can recite a laundry list of problems with the storytelling and characterizations. Since we never see Hogancamp before the attack, we can’t tell how much he’s changed (in the film, at least, he retains an interest in WWII from his old life, not to mention his fondness for women’s footwear). We also don’t see him creating Marwen. The town is already there and populated when the movie starts, so we don’t get to see Hogancamp finding inspirations for either the look or the feel of the place.

Okay, the filmmakers wanted to jump in later. Fair enough. Let’s look at what’s here. Hogancamp is immersed in what he has created with Marwen. Whether it’s kids playing with dolls or older folks playing with online avatars or writerly types with stories in their mind, this much is true: no matter how it looks or sounds to outsiders, within the environment, the adventures are always breathless, the dialogue sparkling, the people vivid. That seems to be how Hogancamp experiences Marwen. What the filmmakers show us is trite and camp, even sometimes self-mocking. Hogie’s quip that he can’t blink because he’s a doll not only violates the world’s reality but also contradicts what we’re seeing (because of the visual effects, the dolls blink as much as humans do). This doesn’t celebrate Hogancamp’s idiosyncratic vision, it condescends to it.

As far as Hogancamp’s outside-Marwen life, we’d be more concerned with his apparent addiction to pills if we knew what they were for. (Painkillers? Antidepressants? Something else?) The ways in which the movie shows Hogancamp working out his issues in Marwen doesn’t invite out empathy, because these aren’t adventures we want to share.

With the actual Marwencol, Hogancamp has made something unique and extraordinary. That, alas, cannot be said for WELCOME TO MARWEN.