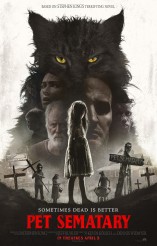 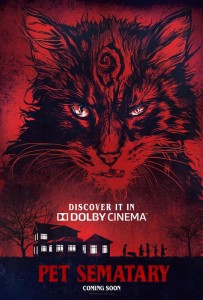 Stephen King’s 1983 novel PET SEMATARY was adapted as a film once before, in 1989, with King writing the screenplay and Mary Lambert directing. Lambert also directed a 1992 sequel, scripted by Richard Outten.

PET SEMATARY gets off to a promising start with a flash-forward that shows one house ablaze and another with a trail of blood leading up the front porch. Then we’re back with the Creeds as they move in and investigate their new property. There’s a pet cemetery – misspelled as “Pet Sematary” by the children who initially set it up – in the woods nearby. Beyond this, past a barrier that is intended to be daunting, lies a patch of “sour” land. Neighbor Jud (John Lithgow) warns Ellie away from the barrier. When Louis is at his new job at a college clinic, he unsuccessfully tries to save a young man, Victor Pascow (Obssa Ahmed), who has been hit by a car. Victor subsequently begins appearing to Louis, also warning about what lies beyond the animal graveyard. But then, when Church is found dead by the side of the road, presumably having been run over, Jud persuades Louis to take the dead cat over the barrier to a place where what you put in the ground comes back … but changed. Church does indeed come back. Anyone who’s seen the trailer knows the cat is not the last casualty of the road, nor the last body brought to and back from the “sour” land. 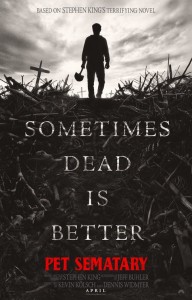 In many respects, this PET SEMATARY remake is admirable. The filmmakers are canny with their jump scares. They also clarify something vital that was overly vague the first time around, namely why anybody who knows about the resurrection ground would recommend it, given the always undesirable results. Additionally, they change the mythology just enough to avoid clichés about Native Americans that again raised unanswered questions (like why a tribe would continually use this place as a burial site, to say nothing of how they managed to survive doing so).

But then there are some riffs that are new and just don’t work. There’s a great touch of folk horror with local children staging a pet funeral, but this doesn’t connect to other elements in the story. Rachel starts having supernatural visions before there are visits to the cemetery, but again, the film doesn’t try to tie these to the larger plot.

More mundane and more telling is Louis and Rachel’s disagreement about a conversation with Ellie. In the earlier film, this is about Rachel’s reflexive dislike of discussions of death. Here, it’s a dispute about religious beliefs. This is apparently the first time in nine years of marriage (and presumably there was a courtship before that) that Rachel learns that Louis is an atheist. For a little while, we wonder if we’re meant to understand they have poor marital communication, but no, it’s just an indication that the characters and their relationships haven’t been thought through fully. 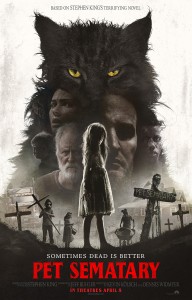 Then there’s the fact that our loving couple, who clearly can afford to be choosing about their housing and want to attend closely to their kids, select a new home next to a trucking route. It is crucial to the story, of course, for there to be a dangerous road nearby, but the trucks practically careen over the front porch. (To be fair to the filmmakers, this was also the case with the 1989 version.) This is no place for small children to be unsupervised, or for cats to be let out of the house, ever.

It’s easy to understand what the filmmakers were going for in switching around which child is affected. Having an articulate nine-year-old rather than a toddler would seem to allow for much more variety in the parent/child interactions and in making us wonder if there’s any hope of a positive outcome. However, the timing of reactions is off. US has just proved anew that children can be terrifying. In PET SEMATARY, though, the hoped-for clash of innocence and monstrousness is unbalanced. What’s coming is telegraphed so much that it seems absurd that Louis, despite the depth of his grief, doesn’t see it, too. There are moments that are unintentionally funny (when Louis lies awake and wide-eyed, pondering what he’s done, the press screening audience laughed) and others that are meant to be dramatic and just fall flat.

PET SEMATARY works as a jump-up scare-fest, but it has no deeper levels.