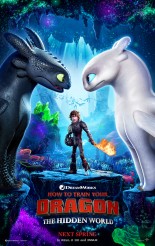 ©2019 DreamWorks Animation
HOW TO TRAIN YOUR DRAGON: THE HIDDEN WORLD
Reviews

Movie Review: HOW TO TRAIN YOUR DRAGON: THE HIDDEN WORLD

The last and least of the animated trilogy 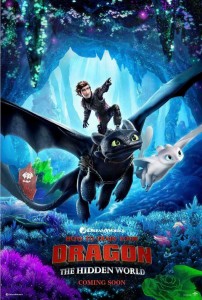 HOW TO TRAIN YOUR DRAGON: THE HIDDEN WORLD | ©2019 DreamWorks Animation

The first HOW TO TRAIN YOUR DRAGON film was released in 2010; its sequel came out in 2014. Based on a series of novels by Cressida Cowell, they were charming tales of a boy and his dragon, plus interspecies cooperation, with exciting action and some scary threats.

Hiccup (voiced by Jay Baruchel), expected to take on the mantle of chieftain now that his father Stoik (voiced by Gerard Butler) has passed away, doesn’t feel he’s ready to take charge. Always an explorer, Hiccup is more interested in finding somewhere that dragons and humans can live in peace, untroubled by dragon hunters. Perhaps the Hidden World that Stoik spoke of, where dragons fly free, is more than a fable?

Meanwhile, Hiccup’s dragon and best friend Toothless, an ultra-rare Night Fury, sees a female Light Fury and falls in love. What will this do to the bond between Hiccup and Toothless? And what about the nefarious Night Fury-killing dragon hunter Grimmel (voiced by F. Murray Abraham)?

As always in the HOW TO TRAIN YOUR DRAGON films, the title creatures are utterly delightful. They come in all shapes and sizes and colors and abilities, so whenever there are multiple dragons on screen, it’s a source of visual joy. The village itself is also a lot of fun, with its dragon-friendly buildings and accessories. We also like Hiccup, who has grown into a reasonable young man, though his self-doubt is a bit repetitive. 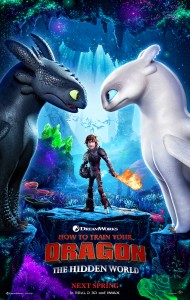 HOW TO TRAIN YOUR DRAGON: THE HIDDEN WORLD | ©2019 DreamWorks Animation

Come to that, a lot of HOW TO TRAIN YOUR DRAGON: THE HIDDEN WORLD is a bit repetitive. The second film in the series dealt with, well, a hidden world full of dragons. It was a little easier to find than the new one, but the general idea has already been explored at some length before.

A fair amount of time is given to the courtship between Toothless and the Light Fury. The movie doesn’t seem to know if it wants this to be soaringly beautiful or just cute, and doesn’t fully manage either. Also, even by the standards of mute animated mates, the Light Fury doesn’t have much personality. She sparkles prettily, but for as much screen time as she gets (and for as much love as Toothless feels for her), she really ought to be more interesting.

There isn’t much guesswork in how this will all turn out, either, although the ending is upbeat enough that little ones should be okay with it. Grimmel is a medium scary bad guy for small viewers, but he’s not particularly distinctive. He also has less of a plan than we think he does at first, which probably won’t bother many people.

HOW TO TRAIN YOUR DRAGON: THE HIDDEN WORLD is diverting enough. If you and your family really liked the first two, this should be relatively enjoyable. If you’re looking for an improvement on the first and second films in the series, however, this does not deliver.