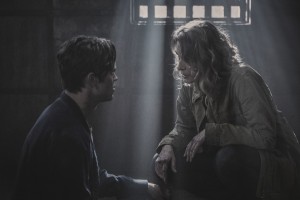 In the other world, archangel Michael (Christian Keyes) and his hench-angel Zachariah are trying to get Jack (Alexander Calvert) to cooperate, first by giving him nightmares (he can’t save Sam and Dean from a fire), then by appealing to his love of the Earth (fake Castiel appears to him and tries to talk him into using his powers to stop humans from destroying the planet – hey, I’m with fake Castiel on this one). In both cases, Jack realizes it’s phony, so Michael tries a different tactic.

Jack is put into a cell with Mary Winchester (Samantha Smith). Between them, they figure out that Michael wants Jack to open a doorway to our world, and that he’s going to torture Mary to make Jack do it. Mary insists that Jack must let Michael kill her rather than open the door. Jack insists they are going to escape. There is a portion of the cell where the warding is weak. Jack’s powers, which have been dampened so far, work here. Maybe they can escape.

Back in our world, in the bunker, Prophet of the Lord Donatello (Keith Szarabajka) finally finishes translating the demon tablet fragment. The fragment has a spell for opening a rift between worlds, which (everyone hopes) will enable Sam and Dean to rescue Jack and their mom Mary. Donatello screams “Eureka!” This causes Sam (Jared Padalecki) and Dean (Jensen Ackles) to momentarily fear that Donatello is having a stroke. No, he’s had a breakthrough. However, the spell calls for the hearts of Gog and Magog, who have been banished to a “place without a place.” Hmm, sounds like where Castiel (Misha Collins) was after he died, before Jack brought him back. Since Gog and Magog sound like very bad guys, the Winchesters have no concern about killing them. Castiel thinks he can find them, Dean offers to go with him.

Castiel feels that he must have been brought back from death for a reason. Jack saved him, but he hasn’t saved Jack. Castiel is also worried that if alt-universe Michael comes to this world, he will bring an army and wage war. Dean reassures Castiel that Castiel has a purpose – he’s needed – and that they’ll do whatever it takes.

Castiel summons Gog (Michael Jonsson) and Magog (Andre Tricoteux), who are midway to being giants. Dean cannot stop laughing at the fact that they are wearing loincloths. (Is Dean twelve? Yes. Yes, he is.) The large ancient beings think that both Dean and Castiel are “beautiful.” Despite a few mishaps, Dean and Cass vanquish the giants. Then Cass finds that they are filled with sand, as some ancient beings were. This is a problem – they’ve got small rocks, not hearts.

Dean tries to call Sam about this, but Sam has his own problems. Donatello is still under Asmodeus’s spell. When Sam’s back is turned, Donatello whacks Sam over the head with a bottle. 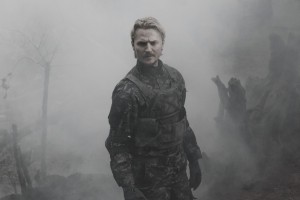 Is the weak spot in the cell warding a ruse to lull Jack into using his powers? No, because when Jack does use his powers to break himself and Mary out, Michael is plenty annoyed. He sends Zachariah out to retrieve Jack and kill Mary.

However, a fake-out has been perpetrated in our world. Sam has managed to get the upper hand and has Donatello tied to a chair in the middle of a pentacle by the time Dean and Castiel return. The guys deduce that since Gog and Magog had no hearts, the spell could not have called for them – Donatello sent Castiel and Dean out with the expectation that they’d be killed. But why? Donatello is ranting that Sam and Dean want his power as Prophet for themselves (they don’t) and that they only brought him to the bunker so they could use him (um, well …).

In the AU, Mary and Jack are found by none other than that world’s Bobby Singer (Jim Beaver). Bobby knew AU Mary, who saved his life many times, so he brings her and Jack back to the human resistance encampment. Bobby and Mary catch up – in our world, Mary made a demon deal that saved her husband and allowed Dean and Sam to be born. In the AU world, Mary never made the deal, so John Winchester died before they had children. Since in our world, Sam and Dean stopped the angel/demon war that has decimated the AU, Bobby thinks Mary made the right choice. He declined to go to our world, because his world needs him.

While this chat is going on, Jack is entertaining the camp’s children by making hand shadow animals on a screen. He gets a little carried away, and the shadows become a little more elaborate (a feathered eagle, an antlered stag) than what a person could really accomplish. Bobby notices, and Mary admits that Jack is half-angel (she doesn’t say which angel). Bobby is horrified and demands that Jack be out of the camp by morning, even if Mary goes with him. Bobby insists that all angels will turn on humans in the end.

Back at the bunker, Dean, Sam, and Castiel are trying to figure out why Donatello seems to have been driven insane by the demon tablet. Kevin Tran worked himself to the bone, but it never made him snap. Then Sam reminds everybody that Donatello doesn’t have a soul – Amara ate it. Castiel explains this is terrible. The human soul acts as a filter for the power of the tablet. Without it, you get a raving maniac who craves fried chicken all the time. Sam lost and regained his soul, but this is different, because Donatello’s soul can’t be retrieved. Castiel suggests putting Donatello out of his misery so that another Prophet can be anointed. Sam and Dean (but mostly Sam) are adamantly against this. Castiel therefore goes into the room and extracts the spell from Donatello’s mind.

In the AU, Mary realizes how much Jack is enjoying being in the camp, but tells him they can’t stay. Before they can leave, the camp is bombed by angels. Bobby blames Jack – Jack’s use of his powers must have alerted Michael’s forces. Before the camp can be evacuated, Zachariah and his ground troops show up. When Zachariah threatens Mary, Jack uses his mojo to incinerate the angel, then causes three bombs to burn up before they can land. Even Bobby is impressed. Jack says that he couldn’t run away; Sam and Dean would have stayed and fought. Since this won’t end until Michael is dead, Jack decides he has to kill Michael.

Castiel’s probe has gotten all the information needed, but Donatello, though technically alive, is now brain-dead. Dean and especially Sam are outraged. Castiel retorts that a) Donatello had no soul, and was a danger to Sam, Dean, himself and others, b) though it was not voluntary, Donatello was in league with Asmodeus, and c) they now know what the ingredients for the spell are: grace of an archangel, fruit from the tree of life, Seal of Solomon, and the blood of a most holy man. Finally, Castiel tells Dean that what Dean told him holds: “Whatever it takes.”

“Good Intentions” is an entertaining episode, and it gets bonus points for having Bobby, with more bonus points for letting Bobby be the hero of his universe. It’s also good to see Mary again, the Gog and Magog stuff is amusing in a silly way and the increasingly intricate shadow animals are funny.

On the “Say what?” side are the following. First of all, we’ve been hearing from the outset of Jack’s existence that he can be more powerful than any angel or demon, so what’s the catch to him going after evil Michael? He could always have a crisis of confidence, but really, how much self-doubt can a person suffer? Scratch that, this is SUPERNATURAL, ignore the question, Your Honor.

Then there’s the whole business of Donatello not having a soul. We had multiple episodes about people not having souls being public menaces, so why was Donatello okay for as long as he was, long before Asmodeus got to him? Okay, maybe being a Prophet of the Lord protected him, but shouldn’t this at least get a mention? It’s not like we aren’t getting plenty of exposition on other fronts.

At this point, since Donatello is in a vegetative state, it seems Castiel would be right about letting the Prophet die, so another, more whole Prophet could be anointed. On a not unrelated note, wouldn’t a Prophet of the Lord count as “a most holy man”?

“Good Intentions” raises some good questions, but it’s enjoyable as it rolls along.