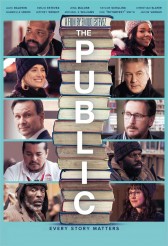 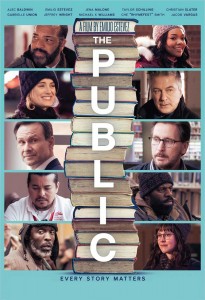 THE PUBLIC takes its title from the Cincinatti, Ohio Public Library, where most of the action is set. It is a fact that quite a few homeless people in cities all over the U.S. use public libraries not only as sources of information, but also as daytime shelters to get in out of the elements. It’s also a fact that, as global warming becomes worse, so do outdoor temperatures.

The librarians at the Public in this film take their homeless patrons in stride, provided they don’t do anything to upset others. As the story opens, the library is being sued for asking a man to leave because of his smell. Another man strips naked and begins to sing “I Can See Clearly Now,” but collapses and needs an ambulance before security can get near him. Mostly, though, it’s a live and let live situation.

One night, when it’s clear the temperatures are going to drop below freezing, the homeless people in the library decide they’re not going to leave. The shelters are full up and friends of theirs are dying of hypothermia. The sit-in they stage is less about political protest than physical survival. Emilio Estevez, who also wrote and directed, plays Stuart Goodson. Stuart decides to stand with the homeless, who barricade themselves on the Public’s third floor. The police and the media interpret this as a hostage situation.

As THE PUBLIC opens, we see Stuart and his coworkers – Jeffrey Wright as supervisor Mr. Anderson, Jacob Vargas as security guard Ernesto, Jena Malone as environmentally conscious Myra – all grappling with ethical issues involving the homeless amongst the stacks. For awhile, the movie looks like it may be a courtroom drama minus the courtroom. It also somewhat resembles an HBO or Showtime movie (cast members Wright and Michael Kenneth Williams, who plays homeless veteran Jackson, are both HBO stalwarts).

Then we get to the police standoff. Filmmaker Estevez poses a blunt, troubling question: when the choice is preserving public order (having the library empty at night) vs. human lives, how can the former be justified? This would be a valid debate if THE PUBLIC wanted an argument, but it doesn’t provide anybody on the public order side who is even vaguely credible. Christian Slater plays a district attorney running for mayor who says something along the lines of how giving in on this issue would open the floodgates for blackmail. Since his character is so self-serving, there isn’t even conviction in his rationale.

We don’t require a debate, but then THE PUBLIC resorts to some far-fetched behavior to keep the action going. Every time Stuart has the opportunity to state what’s really happening, to a hostage negotiator (Alec Baldwin) or a TV interviewer (Gabrielle Union) – these people are in the library because they’re afraid they’ll die if they leave – he doesn’t do it. Likewise, the movie doesn’t seem to quite know what to do with the fact that Jackson, the leader of the homeless group, keeps urging Stuart to do all the talking. Since Stuart is white and Jackson is black, it seems like this could be a strategy to prevent the police from opening fire (they’re less likely to shoot a white librarian than a black homeless man), but this is never openly addressed.

Estevez has assembled a top-flight cast and has a worthy subject. He also has a feel for how to keep things moving. In the end, THE PUBLIC sometimes goes over the top, but it’s never dull.