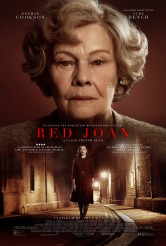 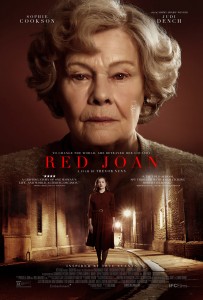 RED JOAN’s Joan Stanley, played at different stages of life by Judy Dench and Sophie Woodson, is not actually a real person. While she is based, very loosely, on the real Melita Norwood, this means that the screenplay by Lindsay Shapero, based on the novel by Jennie Rooney, can go wherever it wants.

Norwood was in fact exposed as Britain’s longest-hidden KGB spy. Like Norwood, Joan began leaking nuclear secrets to the Soviets at the end of WWII. In RED JOAN (but perhaps not for Norwood), the seeds of this are planted when Joan (played by Woodson) is at university, one of the few female students studying science. Joan is befriended by dedicated party girl Sonya (Tereza Srbova), whose brother Leo (Tom Hughes) is a handsome Communist activist. Joan falls for Leo, who may or not be sincere in his interest in her. Leo certainly interested when Joan gets a job assisting a top English scientist, Max (Stephen Campbell Moore). Leo urges Joan to copy documents on bomb-making. Joan resists, until the bombing of Hiroshima.

This is not exactly spoiler material, as the now-elderly Joan (Dench) is arrested in 2000 by the British authorities on charges of espionage. RED JOAN then jumps back and forth between the older Joan’s interrogation and the younger Joan’s ongoing internal conflict about whether or not what she’s doing is right.

Trevor Nunn, a titan of the theatre, directs RED JOAN with the kind of sturdy, steady pace that we might expect of a drama made in the ‘60s. Joan asserts that her actions are a matter of principle (she never takes money from the Russians), and it makes sense that this is what she’s telling herself. What’s a little weird is that the film appears to take her at her word on this, even as it’s showing us that Joan is clearly swayed one way and the other by Leo, inclined to help when she’s in love and inclined to stop when she’s angry with him.

There’s no arguing whatever with Dench’s performance. With the flicker of an eyelid, she can go from exhausted-seeming senior citizen to sly observer. This is camera acting at its finest. Cookson is warm and winning, even if she doesn’t seem likely to ever become Dench later in life. The supporting cast is strong.

RED JOAN has most of the elements that made for good drama in days gone by: strong leads, world-shaping events, big moral questions, suspense, and romance. Joan herself and her choices aren’t as multifaceted as could be – there’s never malice in her actions (momentary cowardice, yes, but her intentions are pure). The film points us to what it wants us to ponder: did she do the wrong thing, or is her stated reasoning justified by history? We do leave thinking about this, but we also wonder why RED JOAN didn’t feel confident enough in its protagonist to spend more time on her forming her convictions and less time showing her being a fool for love.

New Posters for PIRATES OF THE CARIBBEAN: ON STRANGER TIDES
WonderCon 2011: Why BREAKING IN debuting in April a good thing
Exclusive Interview: JUSTIFIED star Joelle Carter is a creature of Elm...
TV Review: BEING HUMAN - Season 3 - “It's a Shame About Ray” - Season ...