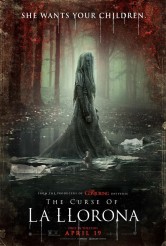 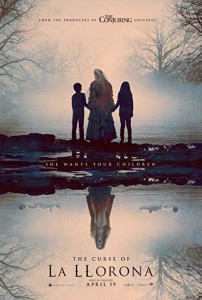 THE CURSE OF LA LLORONA is rated R. At first, this is surprising. There’s no nudity, no swearing, and not a whole lot of bloodshed. However, since THE CURSE OF LA LLORONA is, start to finish, about young children in supernatural jeopardy, the R rating is probably warranted. This is despite the film’s tone, which is more movie of the week than bone-chilling.

Indeed, movies of the week were still in vogue when THE CURSE OF LA LLORONA is set, in 1973. It’s initially unclear why the story is set in 1973 – it’s not like ghost-busting technology has improved so much in the real world that it would make the events obsolete. Early on, though, we get a vibe tells us, well before it’s confirmed onscreen, that we’re in a certain horror franchise (reading the cast list provides a definitive clue). Same kinds of beats, same kind of earnestness, same invisible forces flinging people hither and thither, same kind of emphasis on Catholic faith to combat spectral evil. This will either be comfortingly or uncomfortably familiar, depending on one’s fondness for the subgenre here. 1973 conforms to the timeline franchise, which again doesn’t seem to make much difference to the film, except for some amusing fashion choices.

La Llorona (the Weeping Woman) exists in Mexican and South American mythology as a counterpart to the Greek Medea. In life, she murdered her own children to take revenge on her unfaithful husband. Unlike Medea, La Llorona killed her children by drowning. Legend has it that when she realized what she had done, she drowned herself and became a spirit condemned to roam the Earth, seeking to replace her lost children – but she then drowns the children she steals.

We see La Llorona’s original actions in a prologue, then flash forward to 1973 Los Angeles. Social worker Anna Tate-Garcia (Linda Cardellini) is raising young daughter Sam (Jaynee-Lynne Kinchen) and son Chris (Roman Christou) alone after the death of her police officer husband. When Anna rescues two little boys from being locked in a closet by their mother (Patricia Velasquez), it sets off a chain of incidents that result in La Llorona targeting Chris and Sam.

The script by Mikki Daughtry & Tobias Iaconis gets points for setting up an explanation for why this is happening to these people. However, since they go this far, it would have been pleasing if they’d gone just a little further and explained why La Llorona targeted the earlier victims we see; as it is, we can’t tell what’s kept La Llorona from wiping out the neighborhood. We also can’t tell why La Llorona appears at some times and not others, nor the extent of her power over the children she wishes to steal. 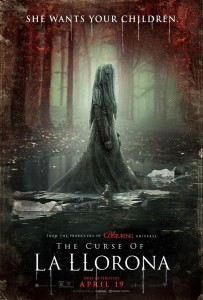 On the other hand, THE CURSE OF LA LLORONA is written so that almost nothing happens because a character does something dumb (with the notable exception of one action by a child). People act sensibly and the horror happens anyway, which is generally better than horror happening because the characters are so stupid that they’re inviting calamity upon themselves.

Director Michael Chaves makes good use of downtown Los Angeles, exploiting its bleaker, emptier parts for maximum chills. He’s also reliable with his jump scares, so that even when we can surmise what’s coming and where it’s coming from, the timing and imagery still provides a jolt.

While Cardellini gives a committed performance in the lead, THE CURSE OF LA LLORONA might have benefitted from being more firmly placed in one of Los Angeles’ many diverse Latin communities. As it is, the movie has its moments of unintentional silliness, but it’s also nicely creepy. At the end, we get the sense that it has more or less delivered on its promise. It’s not hugely original, but it works as popcorn horror.