The actor talks about his new series 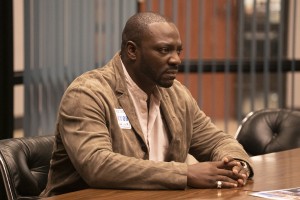 THE FIX, ABC’s Monday-night legal drama, is based (in its first season, at least) on the courtroom experiences of Marcia Clark. Clark gained fame as the prosecutor in the real-life murder case against then-famed football player O.J. Simpson, accused of killing his wife Nicole Brown Simpson and her friend Ronald Goldman. Simpson was declared not guilty, though he subsequently lost a civil suit brought by the parents of the victims. Clark retired from prosecution and later went into private practice, as well writing books. She’s also one of the executive producers of THE FIX.

In THE FIX, former assistant district attorney Maya Travis (Robin Tunney) leaves the law and Los Angeles after losing a high-profile double-murder prosecution against famous actor Sevvy Johnson, played by Adewale Akinnouye-Agbaje. However, eight years later, when it seems that Sevvy may have killed his girlfriend, Maya comes out of retirement to see if she can win a new case against him.

Akinnuoye-Agbaje (which, he explains when asked, is pronounced Ak-in-OY-ay Ag-bah-JAY), is originally from London, England. He first made an impression on American audiences in HBO’s OZ, and subsequently portrayed Mr. Eko in ABC’s LOST. Other high-profile credits include THE BOURNE IDENTITY, UNSTOPPABLE, TRUMBO, CONCUSSION, and SUICIDE SQUAD. Akinnuoye-Agbaje also starred in ABC’s 2017 miniseries TEN DAYS IN THE VALLEY.

ADEWALE AKINNUOYE-AGBAJE: I think he’s a victim of both. He’s a very charming man, and he’s utilized that gift to get into high places, and to get him what he needed, whether it’s opportunities, whether it’s females, whatever it is, he’s utilized that. And I think, because of that, and he’s been unchecked, he actually believes a lot of his own hype. And I think what happens with this character is, there’s a rude awakening where he has to really evaluate himself for who he is once all of the façade is dropped. So I do think that he believes what he says. But I think that’s as a result of years of manipulating others and himself, telling himself this is who he is in spite of his own realities. And by the end of the season, he has to take a real look at himself, regardless of what he’s accomplished and what he’s said.

AX: How is it working with Marcia Clark? Is there any sort of a difference in her authority as an executive producer on set and/or with the creative process?

AKINNUOYE-AGBAJE: There’s a big difference, because you always have an expert point of reference. I mean, this is a show that’s loosely based around a [real-life] legal drama. And what better point of reference to have than the best D.A. in the world, one of the most renowned? So any time I was in [a scene in] court, or even outside of court, I said, “Is this what would happen? How would the defendant be acting, or what would he be entitled to?” I could always call on Marcia for that. And just creatively, she had her own input emotionally, what she endured, and what she felt a defendant would be going through at that time. So we were very collaborative, and I relied on her for a lot of research. She gave me a lot of material to look at and read, whether documentary or books or articles to read. So she was a huge asset and just super-intelligent, aside from her legal background. She’s a very dynamic woman, a no-b.s. kind of woman. She will give it to you straight. 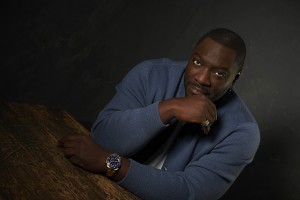 AX: We know from the pilot that whether or not Sevvy is guilty of murder, he is a batterer who hits his girlfriends. Do you have to figure out how to play someone who is violent, not in self-defense, but attacking a lover?

AKINNUOYE-AGBAJE: I’ve played many ambiguous characters throughout my career, but this is one of the more challenging ones, mainly because I was insistent with the writers on making him accountable, and not just explaining it away through a difficult childhood, but really evaluating the process that would make somebody have those kinds of behavioral attitudes, and look at them, and own them. And it was very uncomfortable for me, who is in a very good, happy space in my life, to take on that energy as a character, knowing that it’s a constant theme throughout [his] life, that [he is] domestically violent. How do you cover that up, to not only the public, but also your family? And there are times in the series where that façade is dropped, and you’re exposed to not only your own family, but to yourself. Because I think there was always an explanation that he had for himself, and when he runs out of those – it was a very difficult and challenging thing for me, as an actor, to embrace. It’s one thing playing a drug dealer, but to actually feel that you’re responsible for domestically abusing somebody who is far weaker than you, it was troubling, and it was difficult, very challenging.

AKINNUOYE-AGBAJE: That it’s an engaging thriller/legal drama, where [there is] dynamic human analysis of each character, when there’s a high-profile case, the impact that that has on absolutely everybody involved. And that by the end of the ten episodes, you will get your fix. You will know if he’s guilty or not guilty.