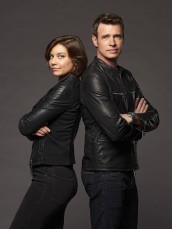 The executive producer talks about shooting in Europe and meeting fans 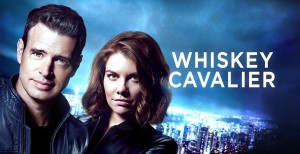 In ABC’s new Wednesday-night spy adventure WHISKEY CAVALIER, Scott Foley and Lauren Cohen star as, respectively, FBI Special Agent Will Chase and CIA operative Frankie Trowbridge. After a rough start, the pair team up with a few allies to pursue international bad guys around Europe. One of the bonus features of WHISKEY CAVALIER, created by David Hemingson, is that it really is shot in Europe; production is based in Prague in the Czech Republic.

Bill Lawrence is one of WHISKEY CAVALIER’s executive producers. Lawrence created the series SCRUBS, co-created the series SPIN CITY, CLONE HIGH, GROUND FLOOR and COUGAR TOWN, and co-developed the TV version of RUSH HOUR. He is currently involved in an initiative that brings cast and creative teams from non-genre shows to events around the county, so that audiences can have greater interaction with them, and (it is hoped) consequently greater investment in the series they make. Lawrence is married to actor Christa Miller, who has a guest role in the first season of WHISKEY CAVALIER.

ASSIGNMENT X: How would you describe the relationship between Will Chase and Frankie Trowbridge, code names Whiskey Cavalier and Fiery Tribune?

BILL LAWRENCE: You’ll see we’re playing MOONLIGHTING. Those two don’t see that they’re attracted to each other, and everybody else does. And his push as being an open-hearted guy is, “Well all need to be friends, and a family,” and hers is, “I want nothing to do with anybody here.” So it’s not playing a lot of the sexual dynamics, especially after the pilot.

AX: Scott Foley was talking earlier about liking shows like …

AX: Was ABC actively looking for something in that vein?

LAWRENCE: The thing that we kind of in a good way sold them on was, they’re always looking for HART TO HART and MOONLIGHTING, but no one’s done [a romantic action/adventure/comedy lately]. The action comedies that I grew up with were funny. 48 HRS and BEVERLY HILLS COP and LETHAL WEAPON and all those shows had a tremendous amount of comedy, and still a tremendous amount of stakes and action. And so I think part of it, in this landscape, is selling networks on the ability to produce cinema-level action on a TV scale. And I think that was the only tough sell. Because, yeah, they’re all looking for CASTLE and MOONLIGHTING again. 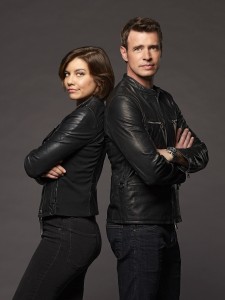 AX: With shooting in Europe, are you having to spend any more time putting stuff together, because you don’t know the production landscape as well as you do the industry infrastructure in SoCal, or …?

LAWRENCE: The amazing thing is how good they are at it. If you walk around Prague, it’s a huge production city, because it doubles for so many European cities. And when you walk around, you’re literally like, “Oh, BOURNE IDENTITY. Oh, TAKEN. Oh, SPY GAME.” If you’re a fan of the genre, it’s everywhere, and they’re so much more production-friendly. In the pilot, they let us cordon off three blocks to have that guy hit by a car and spin through the air. They’re just used to it. So it’s the exact opposite [of problems]. They’re very open and amenable, and we have a world culture for American TV, so the coolest thing for us has been all these [European] journalists there that are used to getting American shows [on television], but never had access to them. They’re on the set week after week.

AX: So you’re getting a lot of publicity, and that’s helping international awareness of WHISKEY CAVALIER?

AX: So that feeds into American awareness as well? Are you on Twitter, talking about WHISKEY CAVALIER?

LAWRENCE: Yes. It’s really interesting. I teach at the show runners’ training program, and one of the things that I think is – I’ve been doing this so long that you used to do your show, and then you’d have a meeting, and beg for fifteen-second [promotional] spots, thirty-second spots, or fifty-second spots, and that was promoted. And now, it’s such a cluttered landscape – I love TV. I still watch it, and there are shows out there that people go, “This is amazing” that I’ve never even heard of, which is so rare. And so finding a way to boost awareness, I’ll do anything. You have to be Barnum. We had this little show [that Lawrence was an executive producer on] called UNDATEABLE that we literally went around from city to city, to market to market, doing standup shows, meeting affiliates and stuff. It’s going to retreat to that in a very good way, where you’re appealing directly to people who might like your show. So we’re going to be doing it on this show, too.

AX: Are you filming these presentations? Do you ever write things for the presentations in the hopes that they will be posted online and go viral?

LAWRENCE: Because I’m friends with Conan [O’Brien], and he does this so great with his viral stuff – I think that’s more a product of those shows, when you’re looking for a viral moment. I think what works in my world, and I would have loved it as a kid, giving people that like your show access on a level that they would not normally have. And all of my shows have done that Everybody’s like, “Oh, live Tweet,” but it’s beyond that. It’s getting to talk to, influence, be a part of stuff, and I think people care about that.

AX: Along those lines, do ever you hear back from the audience members who went to the COUGAR TOWN city by city tour?

LAWRENCE: Yeah. By the way, it was such a lovely experience, and I don’t want it to ever seem Machiavellian, but the willingness with those people to try out a show that I’m involved in because of that, it’s got a huge payoff for me, do you know what I mean? Because they felt that they were getting access to something they liked on a level that they wouldn’t otherwise get. I’m not saying they’re automatically going to like anything I do, but they’re at least going to give it a shot, and that’s half the battle nowadays. [It’s about] the more-access culture of trying to appeal to people to watch and hook into shows without just selling the show itself. “Here’s what you’re going to get,” be it access or inside scoops or personalized videos. It’s a greater effort of networks in a giant landscape, trying to figure out how to reach them. It started with networks, trying how to attract viewers still, but now it’s even gone to streaming sites, where Netflix might have five good shows that none of us have ever even heard of, just because they haven’t grabbed that audience to be fans of it yet.

AX: Can you say who your wife Christa Miller is playing on WHISKEY CAVALIER?

LAWRENCE: Yeah. She’s playing Lauren Cohan’s mentor, and the woman who de facto adopted her when her parents were killed when she was younger. So, if you know my wife’s comedic acting style, the reason Lauren’s character is a little closed-off and edgy is because, when she was a teen, she was influenced by my wife.

AX: And what would you most like people to know about WHISKEY CAVALIER?

LAWRENCE: That it’s fun. It’s really interesting for me, TV-wise – I don’t want to make any big comments about where the world is, but I enjoy this show, because I would literally eat popcorn and watch it with my boys and my daughter and just not only enjoy it, but have a laugh or two. It’s good, escapist cinema entertainment.

This interview was conducted during ABC’s portion of the 2019 Winter Television Critics Association (TCA) press tour.