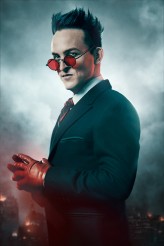 The actor talks the end of the pre-Batman series 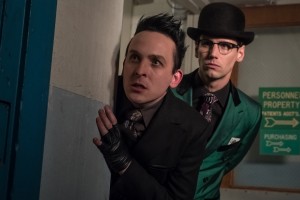 After five seasons of showing how young Bruce Wayne (David Mazouz) became Batman, Fox’s GOTHAM will jump ahead ten years in its series finale on Thursday, April 25. All of the characters we’ve been watching will have come into their own.

Of all of GOTHAM’s distinct individuals, perhaps the most surprising has been Oswald Cobblepot, aka the Penguin, as played by Robin Lord Taylor. Known in the Batman canon to be venal and villainous, Taylor’s Penguin is unexpectedly sympathetic, a strangely stubborn, vulnerable underdog who makes us root for his survival, if not necessarily his victory.

“The collaborative aspect has really blown my mind,” Taylor tells a group of reporters at a Q&A session for GOTHAM’s last season. “You never expect to play a character that’s been around for seventy-five years at the time [GOTHAM began], now eighty years, and part of American pop culture mythology at its finest. I just wanted health insurance. This was the first pilot that I booked. But I never expected that the writers would be so willing to work with us and to allow us to grow into these character and bring parts of our own life experiences to these characters that they maybe had not necessarily seen before. And then, also, when you [describe the characters as] ‘operatic,’ they teach you in film school or on-camera classes to be as small as possible. The camera in this show was absolutely not that. It was bigger. [Director/executive producer] Danny [Cannon], from the very beginning on set from the pilot, he would see us holding back, and he’d be, ‘No. This is your chance. The sky’s the limit.’ And what a dream.”

Another highlight of GOTHAM has been the unusual friendship between Oswald and Edward Nygma, aka the Riddler, played by Cory Michael Smith. “Keep your friends close and your enemies closer,” Taylor relates of Penguin’s approach to their association. “There’s a lot of that dynamic going on. It’s a dance between the two of them, and they’re very well-matched in that way. And for them to respect someone, that person would have to meet them at their same intellect or at their same level, and yet also be able to one-up them. To get Penguin’s respect, that’s what you need. And he finds that in Ed. It would be foolish not to maintain a connection to Edward Nygma, and Penguin does realize this, because together, there are certain things that they can accomplish that blow everyone else out of the water. And they’re both smart enough to realize that. And again, if Penguin is anything, he’s an opportunist, and he sees that opportunity in his friend Edward. And the word ‘friend’ is very complicated in this case.”

Smith describes working with Taylor as one of the highlights of his career. “The same with Cory,” Taylor concurs. “If you ever watch the show and you think, ‘God, they must be having a blast doing that,’ it’s absolutely true. Every frame, it’s really been amazing.”

Smith then tells the press that the only thing he was sorry about was that he, as Nygma with his Riddler cane, and Taylor, as Oswald with his Penguin umbrella, never got to have a cane fight.

In a one-on-one follow-up discussion, Taylor comments on this and more.

ASSIGNMENT X: With the reference to the cane and the umbrella, it seemed like Cory Michael Smith might have been about to say he wanted the two of you to do “Singin’ in the Rain …”

ROBIN LORD TAYLOR: Yeah. We always talked about a musical episode. My pitch was always that we would do a takeoff on THE PRODUCERS, and Penguin and Nygma would put on a Broadway show in Gotham City, but that was [for] Season 6.

AX: They say never work with animals or kids. In this season, Oswald has a pet bulldog, though it’s difficult to imagine anything upstaging you as Penguin …

TAYLOR: It’s impossible, with a dog. You could be on fire, and everyone would still be like, “Make sure the dog’s okay.” Which is how it should be. Honestly, we shot it very carefully. Because the dog doesn’t know that all of these big, giant guys falling down on the floor is fake. The dog thinks that’s real. So we always made sure that it was very safe. And again, I love it so much because it’s like the Penguin might have still that much of a heart, that he could still care for an animal. I just love that.

AX: When we found out this season that Ed Nygma is alive because Oswald saved him, were you surprised?

TAYLOR: Oh, yeah. The writing on our show never ceased to surprise me. And it’s always like, we would ask certain questions of the writers, like, “Where is this going?”, but part of the fun was just letting it happen and then having the script surprise you, and knowing they were doing things that were just so out of left field that it really made the show exciting for the actors as well.

AX: When you read the scripts, do you have any guesses as to what’s going on, or do they tell you in advance, or are you going, “Who did blow up Haven? How does Penguin feel about that?”

TAYLOR: I know, right? At the beginning of the season, they’ll sort of walk us through what’s in store. But as the show goes along, certain things change and morph. And so where you think it’s going to end by the end of the season has never been the true case. This last season was a little bit different, only because we were really hoping for a jump into the future, so we could show these characters as their fully-realized selves. And that was really satisfying. But yeah. I never knew where they were going to go, but that was fun for me. It kept it interesting as an actor.

AX: In the trailer for the GOTHAM finale, there’s a shot where we see Penguin and Riddler together in their full canonical regalia. Was it more fun doing that shot, or was it more fun seeing that shot once it was done?

TAYLOR: [laughs] It was both. Because again, when you’re part of something like this, you’re dealing with these iconic characters that every moment that they have together is such an important moment, especially when it’s the finale of the show. So when we were doing it, and then looking back at it, it’s all just really amazing. Cory and I – and all of the actors – especially the last season, it was important that we absorbed every moment and took it to heart. It had all of that weight behind it.

AX: Do you have a favorite scene or a favorite episode in the five years of GOTHAM?

TAYLOR: I do. There’s an episode in Season 2 where Penguin loses his father, who’s played by the incomparable Paul Reubens. And that’s the episode that I always say is my favorite episode, although it’s the one episode I will never, ever watch. It was the same episode where I myself lost my father. So it turned into this beautiful thing, where one of the hardest things you can go through in your life, to be able in that moment to make something that will last forever, to make a work of art out of that moment, was just such a profound gift. In a weird way, my dad will forever live on in this show, because he was there in my soul on that day we shot those scenes, he’s there in the room, he’s there on the film in that episode when you watch it. I mean that obviously in a metaphysical sense. But again, it was just a really profound moment in my life. It gives me chills to think about it.

AX: You’ve got an almost shaved head, you’re blonde, and you’re wearing large stripes. Is this a hint that you’re about to do a prison show?

TAYLOR: [joking] Yes, I am. I’m leaning into the villain thing. [serious] No, the shaved head is just, I was done dyeing my hair [dark], and yeah, it was nice. It felt cathartic in a good way. I am naturally blonde. It’s the complete opposite of the show. Which is also cool, though, because I get to sort of put that away now, which is good.

TAYLOR: I have a very, very small role in JOHN WICK 3, which was really fun to shoot, and that’s it right now. I’ve been saying that one of the best gifts I’ve been given from GOTHAM is, right now, it’s the first time in my professional life, in my career, that I go forward without any fear, without any fear of failing, of not being able to afford my lifestyle, of not having health insurance. Now I can go forward with just pure creativity in my mind and my heart, and that’s just such a brilliant, brilliant gift, and I’m so lucky. I’m so lucky to have that.

AX: And what would you most like people to know about the end of GOTHAM?

TAYLOR: What would I like them to know most? I would like them to know that what you see when you watch that final episode is a handful of people in front of the camera, and then hundreds and hundreds of people behind the camera who, for every second that you see, everyone’s heart and soul has gone into that moment. It’s an amazing thing to behold.