GOTHAM: Erin Richards on the final season and her directorial debut – Exclusive Interview

The performer talks her directorial debut with a GOTHAM episode 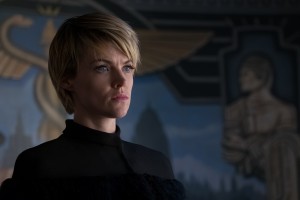 In GOTHAM’s fifth and final season, Episode 9, “The Trial of Jim Gordon,” airing Thursday March 7 on Fox, is a special one for series regular Erin Richards. This is not so much because something major happens for Richards’s character, the volatile Barbara Kean, although that’s entirely possible. After all, Barbara has gone from being the girlfriend of Detective Gordon (Ben McKenzie) to psychotic serial killer to gang leader to ambivalent warrior who is pregnant by Gordon, courtesy of a one-afternoon-stand reunion. Barbara has major turns on a regular basis. However, the reason that GOTHAM Season 5 Episode 9 really stands out for Richards is because she makes her directorial debut with it.

Richards, who hails from Wales despite her impeccable American accent as Barbara, appeared on MERLIN and the U.K. version of BEING HUMAN , was a regular in BREAKING IN, and had roles in the features THE QUIET ONES, OPEN GRAVE, THAT GOOD NIGHT, and IRREPLACEABLE YOU.

Richards explains that, although the episode she directed was the final GOTHAM installment actually made, it is not the series finale. Rather, it was one of two extra episodes added to the season, bringing the total for GOTHAM over five years to exactly 100.

ERIN RICHARDS: The best thing I learned on GOTHAM was how to direct. It will play as Episode 5-09, because we got given an extra two. But I was the final director of GOTHAM, which was a real honor.

ASSIGNMENT X: Are you looking now to do more directing, or do you know which way you want to concentrate on your career, or is it whatever comes up next, acting or directing?

RICHARDS: Well, I’ll be looking definitely for more directing jobs, I’m really interested in doing more directing. I had a fantastic time, and I was really proud of my episode, and I got some wonderful feedback from our executive producers, and from people at Warner Brothers, so hopefully in the future, I’ll be doing some more of that.

AX: Over the past few seasons, Barbara became sort of a warrior empress within Gotham. Once you learned that she was heading in that direction, were there other characters or performances you looked at for that sort of quality?

RICHARDS: Not really. Not specific other people. I just sort of drew on what I knew were her strengths, which were, she’s got a good business acumen, she is very clear in what she wants and how to get it, and she’s very good at manipulating people, and knowing how to push their buttons to get what she wants. So I just combined all that into a bit more of a superhero kind of vibe.

AX: Would you say Barbara is a pragmatic feminist?

RICHARDS: [laughs] I guess so. Feminism is a strange kind of word in the GOTHAM world, I think. She was very headstrong, she knew what she wanted, and she didn’t care what other people thought about her. But it’s not really feminism the way that it is in reality.

AX: Well, Barbara did create Sirens, which is specifically a safe space for women …

RICHARDS: Yes. In the fifth season, she creates a haven for women, yeah, so that is definitely more in a feminist kind of vibe. Extreme feminism. Let’s call it that.

AX: In Season 5, has Barbara gotten over her desire to rule the world, or her desire at least to rule Gotham, or is she still thinking, “You know, if I can move this piece that way, maybe I can take over …”?

RICHARDS: For Barbara, I think it’s always about finding her place in the world. So her thing was finding safety in rule, in ruling everything, in being in control. And then when that didn’t really pull through, because Gotham obviously kind of crumbles to the ground, she finds her safety somewhere else. And that’s more of a redemption story for her, which was I think a beautiful way to end it. 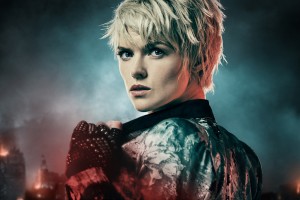 AX: Do you have a favorite phase of Barbara that you’ve played?

RICHARDS: I really like the last phase, actually. I feel like the final episode, the finale, we jump ten years and you get to see her as I always hoped that she would become. I really channeled a very grounded version of herself.

AX: It is known within the BATMAN canon that Jim Gordon winds up with a daughter named Barbara. Should we infer anything from that?

RICHARDS: [laughs] You can infer whatever you want.

AX: How difficult was it for you to find Barbara’s American speaking voice?

RICHARDS: I found it quite easy, because with her, I tend to lower my range. I’m Welsh, and we naturally speak in a higher range, so with her, I just drop about an octave of my voice, and I use that to help get into her character, so that was really nice.

AX: Was there anything you had to learn over the course of the five seasons in order to play Barbara, like how to handle a gun, or …?

RICHARDS: Yeah, a little. Playing her, a lot of fighting. We had a fantastic fight choreographer called Norman Douglass, and he taught me a lot of stuff over the years.

RICHARDS: I’m currently directing on a project called EVERYTHING I WANTED TO TELL MY DAUGHTER ABOUT MEN, and it’s fourteen shorts, being directed by fourteen women, and it will be put together to make one long feature.

RICHARDS: That it’s going to be a fantastic finale, and I hope that the fans feel as I do, that we did justice to the story.