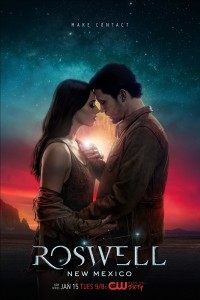 Like the WB’s ROSWELL before it, The CW/UPN’s new Tuesday night series ROSWELL, NEW MEXICO is based on the ROSWELL HIGH novels by Melinda Metz. Unlike the earlier ROSWELL series, ROSWELL, NEW MEXICO returns its heroine, Liz Ortecho (played by Jeanine Mason), to being a Latina, while making the main characters adults rather than adolescents.

The core of the story is still the same. Three extraterrestrial siblings, Max (Nathan Dean Parsons), Isobel (Lily Cowles), and Michael (Michael Vlamis), actually landed in the famous Roswell crash. Awakened decades later, they’ve been able to pose as human and join the community. However, when Max saves the life of newly-returned-to-town Liz, she learns his secret. Liz and Michael love each other, but Liz believes (with good reason) that an alien was involved in the death of her sister Rosa ten years earlier.

CARINA ADLY MACKENZIE: I’m most excited about working with people that I really care about. I’ve got a lot of old friends in the cast. That was really special to me. And learning from Julie was really valuable. I think that Season 2 – I’m excited to go in knowing how to be a boss, because I learned this season. I learned how to talk to people, and how I like people to talk to me, and I think it will be a little smoother, if we get to do a second season, as far as reaching that place of comfort that I really got to this season.

AX: If ROSWELL, NEW MEXICO returns for Season 2, could there be any nonhuman type of extraterrestrials?

MACKENZIE: There could. That’s all I can say [laughs].

AX: And are there going to be forces at work that nobody knows about? There’s some implication that the government is doing a little more than most people are aware of. But is there going to be something beyond that?

MACKENZIE: Yes. We definitely have a lot of mythology to explore. Right now, we’re really focusing on our small town, and what happened in our small town, but as the world gets bigger throughout the season, those questions start to come up, and will be answered. Our aliens don’t know anything about where they came from, or why they are here. So we are going to be asking those questions.

AX: In being a show runner, have you learned anything about how to structure either an episode or structure a season that you didn’t know going into the job?

MACKENZIE: I was very well taught on THE ORIGINALS by Julie Plec and Michael Narducci about how to structure an episode and a season. I was used to doing twenty-two-episode seasons, so it was actually really nice [on ROSWELL, NEW MEXICO] to do a thirteen-episode season. But what I did learn a lot about was structuring a murder mystery. That was the new thing this season, which was, I wanted to do a murder mystery, but I didn’t actually know how to do that, so I had to learn as I went.

MACKENZIE: It changes every episode; the balance of every episode shifts a little bit. Right now, we’re definitely in murder mystery world, but the heart of the show is always the romance. Whether that’s the romance between Max and Liz, or the romance between Michael and Alex [Tyler Blackburn], other romances that crop up over the course of the season, or the relationships between the three aliens, which are also structured a lot like romances are, in the way that Max and Michael are right now – we know that they used to be best friends, and right now, they’re in a difficult place, and we are telling that story of them coming back together, almost as if it’s a romance.

AX: Before you were a television writer/producer, you were an entertainment journalist. If you were doing this interview, what would you ask?

MACKENZIE: I had some hard questions that I was prepared to answer today, but I’m not telling, because I don’t want to answer them [laughs]. I’ll say that one of the things that I was really prepared to talk about today was the fact that we have seven white executive producers on the show that is about a Latina lead, and the thing that we’ve done is fill our [writers’] room and fill our crew with people who can speak to the immigrant experience. We have leaned on Jeanine and her experience as a Latina. We’ve leaned on Michael Trevino [who plays Liz’s other love interest, human town doctor Kyle Valenti] and his experience as a Mexican man. I’ve even talked to Trevino’s dad. And we work with a great organization called Define American, which has helped us build stories in a way that furthers progress and that tells a story authentically, without being exploitative. I’m really proud of our work with them.

AX: Do you foresee promoting any of your writing staff into producers if the show keeps going, so that the executive producer group will be more diverse?

MACKENZIE: Oh, yeah, sure. People are climbing up the ladders. We have a very diverse writing staff. I’m very proud of it.

AX: Are you looking to direct any episodes?

MACKENZIE: I am not looking to direct right now, but I have shadowed Julie now for a couple of episodes that she’s directed of TV, so maybe someday. There’s a lot I have to learn about production.

AX: You shoot ROSWELL, NEW MEXICO in Santa Fe, New Mexico. What is the infrastructure like for making television there?

MACKENZIE: We have a really wonderful crew in Santa Fe. There is studio space. Honestly, what we battled more than any kind of infrastructure issues was weather issues, because New Mexico’s weather is really volatile, so there were a couple of weeks in monsoon season where we were like we had to call it every day at four o’clock, because we were all trapped in our trailers for a lightning storm. But there is a really talented crew there. We didn’t have to in a lot of people from L.A. at all. I’m really happy working to hire as much local crew as we can, because we really love our home in Santa Fe. We’re always happy to have new voices, but we really love being part of a community where we are right now.

MACKENZIE: I would like people to give it a chance outside of what the original series was. We pay homage to that show a lot, and we really love it an honor it, but I do think we’re doing something different, and I hope people give it a shot.

This interview was conducted during The CW’s portion of the Winter 2019 Television Critics Association (TCA) press tour.