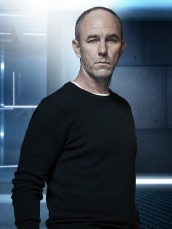 THE PASSAGE: Henry Ian Cusick and Jamie McShane on being frenemies on the new Fox series – Exclusive Interview 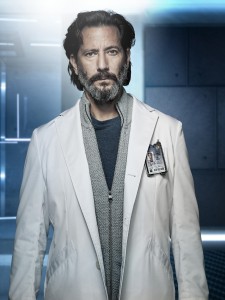 On THE PASSAGE, now in its first season Monday nights on Fox, Henry Ian Cusick and Jamie McShane play best friends turned mortal enemies. Cusick’s Dr. Jonas Lear becomes obsessed with finding a cure for Alzheimer’s when his wife Elizabeth (Jennifer Ferrin) is stricken with the disease. McShane’s Dr. Tim Fanning is fascinated with Lear’s theories, and the two travel to South America – where Fanning becomes infected with a virus that turns him into a vampire-like being with superpowers, including telepathy, and a thirst for blood.

Cusick earned an Emmy nomination for his work as Desmond Hume on LOST. More recently, the Peruvian-born actor has had an arc on SCANDAL and was a series regular on INHUMANS and THE 100. McShane, originally from New Jersey, has appeared in over twenty different roles in the last year. Some of his more notable work has been in series regular roles or arcs on SONS OF ANARCHY, SOUTHLAND, MURDER IN THE FIRST, SCORPION, THE FOSTERS, BLOODLINE, BOSCH, CONDOR, and UNSOLVED: THE MURDERS OF TUPAC AND THE NOTORIOUS B.I.G.

McShane and Cusick get together at a party thrown by Fox for the Television Critics Association (TCA) press tour, where they talk about THE PASSAGE and the profession of acting overall.

ASSIGNMENT X: How much does your characters’ previous relationship influence the present-day relationship between them?

HENRY IAN CUSICK: Pretty heavily. And that’s going to really feature in the next episode. Episode 5 is where we really see the first interaction between Fanning and Lear in a mindscape.

JAMIE McSHANE: And also you see some back story between his wife and me and him. We’re all very good friends from a long time ago.

CUSICK: I don’t know. Justin Cronin [who wrote the trilogy of novels that THE PASSAGE is based on] could be that literal, because I know there are a lot of references to religion, the number 12, and he is a writer, he’s an educated, so it could be a reference. I don’t see it. I don’t see any reference to me being Lear, as in King Lear, no.

AX: You’ve worked a great deal lately. Have you discovered some secret to employability as an actor?

McSHANE: God, I wish I knew. I believe in what I do, and fortunately, people have picked up on it. I think it’s just determination. I prepare for an audition immensely. So I know, because I’ve got to get the job. Every single audition, I feel like, “I’ve got to get this. I have to do my best.” 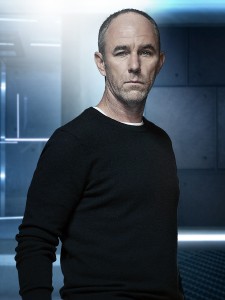 AX: Before you started working so regularly, did you ever question whether you wanted to be an actor?

McSHANE: I’ve never had “I don’t know if I want to keep doing this,” except when I used to drive a truck all day in Jersey, and I was trying to get work, and couldn’t get an agent in New York or anything, and I’d slam my head into the steering wheel and cry and say, “Let me quit, let me quit,” but I never could. But once I started getting costars and guest stars, it’s never, “Oh, God, I don’t want to do this anymore,” it’s like, “Where’s the next job? I’ve got to work, I have to work.” And once you start having kids, it’s, “I’ve got to pay the bills, I’ve got to pay the mortgage,” all that sort of stuff. BLOODLINE was my first series regular, and as an actor, that’s what you really want to get to, especially in this golden age of television. It took me twenty-five years to get BLOODLINE. Mark-Paul [Gosselaar, who stars as Brad Wolgast in THE PASSAGE] has played fewer roles in a way than I have, but with one role, he’s done two hundred episodes, where I’ve done one episode. So it’s amazing for him to keep a career going. I haven’t worked as much as he. I’ve had smaller roles, and fortunately, they’re getting a little bigger now. 2017 was phenomenal. I think I wound up doing twenty-six episodes of TV, two feature films, one that went around the whole world in a month, literally, around the globe. And I got to do both the show BOSCH and UNSOLVED literally at the same time. They worked it out that I would go from one set to the other. And one day, I went from one set to the other and back. And that was amazing. To get to do that, especially as a character actor, and to get to – to dream as a kid of working this much, and then to have it achieved.

AX: How do you work on your characters?

McSHANE: I go pretty far into depth into the characters in the beginning, when I’m developing them, with whatever the writers and directors want, but then it’s kind of locked in there, and you kind of bounce back and forth.

AX: When you were younger, you played a lot of sports. Did that help you with any aspect of acting?

McSHANE: I played a lot of sports when I was young. I got injured at school, a random injury, and I couldn’t play contact sports anymore. So I got into tennis, and I got to a pretty good level with that. To answer your question, yes, definitely. The discipline in athletics and the drive, the drive to do it and the disappointment of not being able to play hockey again when I was young, and having that love, and then having wanted to be an actor since I was a kid, but then when I got hurt, I thought, “All right, life’s not going to go the way you want.” So I didn’t think that was going to happen. And also, the creativity. As an athlete, I’ve always been pretty creative and not traditional. And that’s helped with my acting.

AX: Does your sports background help when Fanning is getting physical with other people? Do they let you do much of that, or is it mostly your stunt double?

McSHANE: The stunt people let me do a lot, which I’m grateful for. As long as I feel comfortable, and they know that I’m safe, they let me do most of it.

AX: Obviously, you were on LOST. Can you compare the genre fever between that and THE PASSAGE?

CUSICK: They’re both big, epic storytelling sagas. One big similarity they have is the flashbacks, which really works a treat. You get a lot of back story, and you get to invest in the characters a lot more, I think, that way. So what you might think a certain way, you’ll get to know how they got there. So yeah.

AX: So you feel like you’ve played both nobility and arrogance, but this is the first character where they’ve met so head-on?

CUSICK: This character, yeah. He has all the sort of noble traits, so to speak, but not really. What he’s doing in Project Noah, he knows that he’s doing wrong, and he’s having to live with that, and he’s trying to justify it by saying that if we find a cure, it’ll all be worth it. But I think deep down, he’s ripped apart by guilt.

AX: And is Fanning a very different part for you?

McSHANE: Yes, in that it’s almost like getting to play three roles, because I’m the brilliant neurologist in the beginning, and I’m the monster in the middle, and then I get to do all these mindscapes, which are a lot of fun. So yeah, it’s a very different kind of role.

AX: Have you played a character before who has Fanning’s ability to easily get other people to do what he wants?

McSHANE: Certainly not in fatherhood, with my kids, I’ve noticed that. No, I’ve never played a character like this before, where he has this mental ability to tap into other people and control other people. I think it’s fascinating. It will be interesting to see where they take it.

AX: Does he enjoy it? Is he capable of the human emotion of enjoying it?

McSHANE: Yeah, I think he’s very capable of human emotion. I think he reluctantly enjoys it, because this is not where he wants to be in life. He didn’t want to be turned, he didn’t want something to happen, but he’s dealing with it – he’s taken the cards and playing them. It’s quite diabolical, but he has fun with it. He’s stuck in the position he’s in, but he’s going to have fun with it.

AX: Is it trippy to go from very naturalistic projects like BOSCH and UNSOLVED to something like THE PASSAGE?

McSHANE: It’s not trippy. Well, it’s exciting. This is what I dreamt of, since I was young, was to get these opportunities and play these different roles, so I’m relishing it. I think it’s amazing.

AX: Does Fanning see himself the way we see him in the mindscapes, where he’s telepathically communicating with the other Virals and sometimes with humans?

McSHANE: Do you see him as gorgeous? Because that’s how he sees himself. No, I’m kidding. In what way?

AX: Does he see himself as a normal person the way we see him in the mindscapes, as opposed to the veiny, vampiric appearance he has to the outside world?

AX: Does Lear have any idea of what’s going on with the mindscape?

CUSICK: At the end of Episode 4, he’s beginning to piece it together, that they’re communicating through the mindscape – not only communicating, they have powers that they can influence people’s actions, like with Grey [played by Jason Fuchs]. And then in Episode 5, he has a whole conversation in the mindscape. So he knows what’s happening.

AX: The production quality on THE PASSAGE is very high …

McSHANE: Yes, it is.

AX: Is that helpful to you as actors?

CUSICK: When they started shooting everything with prime lenses, and I saw the quality of the shots, it reassures you as an actor that the directors are going to make this look really good. And you go on the set, and the sets are really second to none, so it really helps you as an actor. The more you have, it certainly helps, absolutely.

McSHANE: But you don’t realize, until you really see it, what they’ve done. Because when you see the finished product, it’s pretty amazing.

AX: Do either of you have other projects we should know about?

CUSICK: I was in a short film that shot in Hawaii, called HIGH HAWAII. Jamie has way more interesting stuff. We just finished shooting it, and it’s playing the festival circuit.

McSHANE: I did a little part in a film with Willem Dafoe, he’s the lead, called TOGO, and it was fantastic, and then I just got offered a part in a film, I think it’s called THE OUTPOST, that Rod Lurie’s directing.

CUSICK: THE PASSAGE is good, fun, exciting, huge, epic storytelling. This show could go for a long time, and it’s very rich, really complex and quite diverse characters. I think it’s a real treat for any audience.

McSHANE: That you’ve got to watch it. It’s a really wonderful show with a great cast, and everyone delivers.