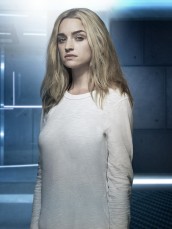 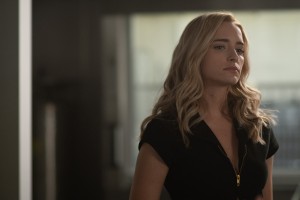 In Fox Networks’ freshman Monday-night drama THE PASSAGE, based on Justin Cronin’s trilogy of novels, an attempt to find a cure for a pandemic has gone very wrong. Instead of curing a deadly flu, experiments on death-row inmates have created Virals, so-called because the scientists can’t bring themselves to say “vampires.”

Brianne Howey plays one of the Virals, Shauna Babcock. Shauna was raped by her stepfather; when Shauna’s mother blamed the young woman rather than the perpetrator, Shauna snapped and killed both mom and stepdad. Now Shauna appears to the world as a veiny, blood-drinking monster, but in her own mind, and in the telepathic visitations with other Virals, she still looks, acts and feels like a normal person, albeit one who is happy to manipulate others for her own purposes.

Coincidentally, Los Angeles native Howey had a role in a feature film called VIRAL. She has been a series regular on Fox’s THE EXORCIST (as the sister of a possessed college student) and had an arc on SCREAM QUEENS. Other credits include roles in I’M DYING UP HERE, I LIVE WITH MODELS and REVENGE.

ASSIGNMENT X: Were you sort of in the Fox casting wheelhouse after THE EXORCIST, or was it a whole new process for THE PASSAGE?

BRIANNE HOWEY: There are similar people involved, so luckily for me, I was already familiar with a lot of them, and I worked with Fox even before I did EXORCIST, because I did SCREAM QUEENS. So at this point, yeah, I feel really lucky to have continued to work with them.

AX: Having done a season of THE EXORCIST, do you see any similarities between the possession on that and the viral vampirism in THE PASSAGE?

HOWEY: On THE EXORCIST, I was depressed, not possessed. I was sort of the red herring there. Now, for THE PASSAGE, I’m one of the Virals, so there’s a lot more prosthetics involved. I think both are great female characters with good arcs, but they’re both pretty different. 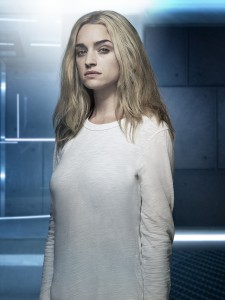 AX: Do the Virals see themselves as human when they’re talking to each other in that inner space? We see them as human, is that how they see themselves?

HOWEY: Because they have such an active inner life, I don’t think how they’re perceived in the cells [at the laboratory, where they appear monstrous] is how they see themselves at all. They see each other as normal. Yes.

AX: So they don’t see that they look scary to everybody, they just think that they’re being persecuted?

AX: Shauna looked like she was in pretty dire straits at the end of the January 28 episode, where she was going to be executed by having artificial daylight trained on her. But you’re here to be interviewed, so it seems like Shauna may have survived …

HOWEY: [laughs] Yes. I had to show Clark Richards [the security officer played by Vincent Piazza] all of the humanity I had to offer and mentally convince him to save me, and he does that.

AX: What would you most like people to know about THE PASSAGE?

HOWEY: It’s a wonderful show about community and love and connection.