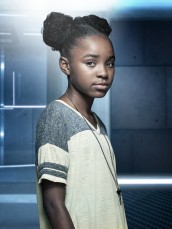 The young performer talks her role in the series 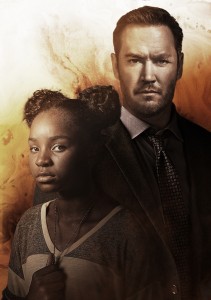 In Fox’s Monday-night drama THE PASSAGE, Saniyya Sidney stars as ten-year-old Amy Bellafonte. Adapted from Justin Cronin’s trilogy of novels, THE PASSAGE explores what happens when an intended vaccine for a worldwide flu pandemic winds up turning human experimental subjects into telepathic “virals” (because most of the characters can’t bring themselves to say the word “vampire”). With no family, and because children seem to weather the vaccine better than adults, Amy is brought in as a test subject. After being given the vaccine, she develops abilities, but she is not like the other virals.

Sidney began her onscreen career as the six-year-old Kizzie in the remake of the ROOTS miniseries. Roles in AMERICAN HORROR STORY, FENCES and HIDDEN FIGURES followed.

In person, young Sidney projects the composure and confidence that are essential parts of her performance as Amy.

Sidney describes the relationship between Amy and Agent Brad Wolgast, Amy’s self-appointed protector played by Mark-Paul Gosselaar, as “a father/daughter relationship. When you have a relationship like that, when I met him, it was like, ‘Okay, I understand.’ So we had to bond, and we bonded. Plus, I had to connect to Amy. So when I connected to Amy, I connected to Wolgast, and then I connected to Mark-Paul. So when we had our relationship, whenever we were on camera or off-camera, it was always something special. It was loud. It was jokes. It was sometimes serious, crying, or I just needed someone to hold. And Amy needed Wolgast, and I had needed Mark-Paul.” 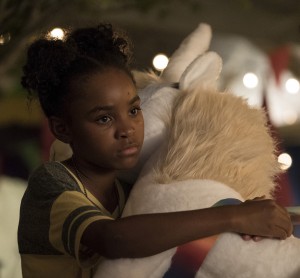 Like Sidney, Gosselaar began his acting career at a young age, starring in SAVED BY THE BELL. Did he have any advice for Sidney? “Yes, I did get words of wisdom,” Sidney replies. “Just, whenever I go to work, I always want to have fun. You don’t always want to [feel like], ‘Ugh, I’m on set, I’m going to be focused. Just leave me alone. I’m in my zone.’ Just be a kid, have fun, and enjoy your work. Being able to be Amy with Wolgast. It’s big-picture. We’re on the run, and we’re like Thelma and Louise. When we’re together, these guys, come on. But it’s just a lot of fun, and he taught me sometimes you gotta have a laugh at times. When we’re doing a scene, it’s awesome to be able to see him in the moment. So I learn off of that, and I’m like, ‘Oh, I’ve never tried this before. Let me see how this goes,’ and then when I act and I’m with him, it feels wonderful, and just being able to, let’s say, play a girl that really needs someone, it’s really whatever Amy’s going through, I’m going through. So I need Mark-Paul, always.”

ASSIGNMENT X: Had you read or known about the book THE PASSAGE before you got involved in the project?

SIDNEY: Well, before, I didn’t know much about it. My dad is a fan, now that I got the job. I didn’t read much – I read some of the first book – but my dad was a big fan. He read a lot of the books, and he was really happy that I got the job [laughs], and when he realized that Mark-Paul was going to be involved, he got really close to Mark-Paul, and they talked about the book for hours [laughs].

AX: How would you describe Amy’s frame of mind in the middle of the series?

SIDNEY: She’s ready to take on the world with Wolgast, but she’s really scared. She doesn’t know what’s going on. She just witnessed something that no ten-year-old-girl should be watching, ever. Or kids in general.

AX: Do you think your friends are going to be allowed to watch THE PASSAGE?

SIDNEY: Yes. All my friends are older, so I think we can handle it [laughs].

AX: I imagine when Amy is jumping out of windows and so on, that’s your stunt double, but you do have to do a fair amount of running and being grabbed and so on …

AX: Were you very athletic before you got involved in THE PASSAGE, or did you have to do training for the physical aspects?

SIDNEY: Yes, for sure. I danced. Since I’ve been acting, since I was five, I’ve been dancing. To get more in shape, I’ve been boxing. But when I first did the stunts, I was really excited. But I had to go into training at first. I was already flexible, so certain things were not hard, but it was fun.

AX: When you go to perform a scene, how much do you think in advance, “Well, I’d like to do it this way,” and how much do you wait to see what’s happening on the day to decide how to do it?

SIDNEY: Let’s see. I think certain things I would love to do, but I think I’m going to wait and see what happens. Go with the flow.

AX: Do you have any kind of visceral reaction to the people who are playing virals in the heavy makeup? That is, do you look at them and go, “Ugh,” or is it just like, “Okay, showbiz, heavy makeup, I get it”?

SIDNEY: Well, it’s funny, because the very first time, they were testing, they had this full prosthetic on Brianne [Howie, who plays Shauna Babcock], and Jamie [McShane, who plays Tim Fanning] to see different things. Before, it was really creepy-looking. They were bald, they had veins, they had really big teeth. This is before, so I used to get scared of that. But now, what they have now, it’s kind of like, they look like themselves, but it’s still creepy as hey.

AX: You’re shooting THE PASSAGE in Atlanta. Did you also shoot the pilot in Atlanta?

SIDNEY: Yes, we did.

AX: And are you from Atlanta, or did you have to go out there for it?

SIDNEY: I had to go out there for it. I live here [in Los Angeles].

AX: How was working in Atlanta?

SIDNEY: I love Atlanta. It’s like a second home, because I have family there. Whenever I go somewhere new, it’s like, “Oh, this is different, I’ve never been here before.” But whenever I went to Atlanta, now that I already feel comfortable, not that I don’t feel comfortable wherever I go, because it’s also a fun adventure, just Atlanta feels home, and I love it so much.

AX: Does your dad go out there with you?

SIDNEY: Yes. We all have busy schedules, so my parents are going to be switching off every two weeks.

SIDNEY: Yes. FAST COLOR [due out in March], with Gugu Mbatha-Raw and Lorraine Toussaint. It’s about these three women of different generations who have powers.

AX: So you get to play sort of a witch?

SIDNEY: No, we have more like powers that can disintegrate, so the government would want to experiment on us as well [laughs].

AX: So playing people that the government wants to experiment on is sort of a career theme at the moment?

SIDNEY: Yes, I have a lot of things going on with the government agencies [laughs].

AX:  You also have a comedy film?

SIDNEY: It’s with Kevin Hart. It’s called KEVIN HART’S GUIDE TO BLACK HISTORY, with Li’l Rel, and I’m really excited for that to come out.

SIDNEY: THE PASSAGE – I hope you get scared out of your boots. It’s going to be scary, it’s going to take you on a journey, and it’s beautiful.

This interview was conducted at Fox Networks’s party for the Television Critics Association (TCA) press tour.