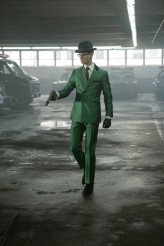 GOTHAM: Donal Logue and Cory Michael Smith give the scoop on the final season – Exclusive Interview 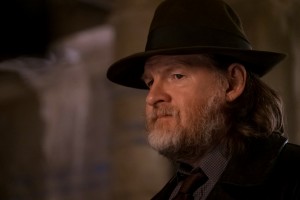 GOTHAM, Fox Network’s drama about the journey of young Bruce Wayne (played by David Mazouz) to becoming Batman, is in its fifth and final twelve-episode season on Thursday nights. The series will culminate in an episode that shows Gotham City and its denizens ten years later, when Batman finally comes into his own, as do his enemies.

Most of the major cast and creatives do a Q&A panel for the Television Critics Association press tour, and then everybody starts hugging each other. From all evidence, it seems like they’ve all loved their time on the show, their characters and one another dearly.

Thus Donal Logue, who plays Gotham police detective Harvey Bullock, and Cory Michael Smith, who plays Edward Nygma, aka the Riddler, literally have their arms around each other’s backs for most of this conversation. Their characters might despise one another, but the actors are clearly fast comrades.

ASSIGNMENT X: Were you waiting for the day when you got to have that full ten years from now look as the Riddler?

CORY MICHAEL SMITH: The last episode? Yes. And I remember – our designer, John Glazer, he was so great about consulting with us, and saying if we had any ideas. They [the design department] pitched what they had been thinking, but asked if there were any alterations or thoughts that we had. These guys are so good. I was like, “You do you, and I will wear it the best that I can.” And they came up with just the most beautiful outfit. They’ve made the fabric so that it’s embossed with question marks, so that as you turn, you see different ones. The detail, and the passion, and the creativity, and the singular identity for this Riddler, and this show, I so appreciate and I could not be happier with the final look.

SMITH: The one thing that I did get to pick out – I said, “I want a new pair of glasses.” And I got to help pick out the green glasses.

LOGUE: I wore the same thing five years, didn’t f**k with that. Harvey’s Harvey. So I didn’t have to do any of that s**t. 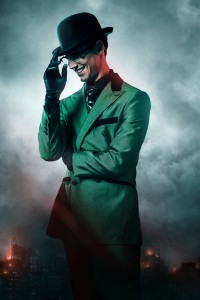 AX: You’ve had quite a career during GOTHAM, outside of GOTHAM. On film, you were in CAROL, with Cate Blanchett and Rooney Mara, you were the lead in 1985, you were in WONDERSTRUCK, and you just played Roger Chaffee in FIRST MAN. On stage, you played Lee Harvey Oswald in the New York City Center Encores production of Stephen Sondheim’s/John Weidman’s ASSASSINS. Are the people casting these productions GOTHAM fans, going, “Oh, my God, he’s incredible, get that guy,” or is that just happening independently of your work on the series?

LOGUE: That’s how talented Cory is.

LOGUE: You remember the first season, when you were in the Frances McDormand [starrer, on HBO] OLIVE KITTRIDGE. I was watching OLIVE KITTRIDGE, I knew, I just instinctively, intuitively knew what Cory was capable of, just knowing him. But when I saw it, I was so transported. He’s just an actor of so much depth – what he can do, where he’s going to go, is going to be awesome to watch.

SMITH: Thank you. I’ve auditioned for the work, and the stuff that’s come to me I think has been because of being able to watch OLIVE KITTRIDGE and GOTHAM, and see two completely different people.

LOGUE: What’s so beautiful is – because [as an actor] you get stuck – you do a big, kind of comic-y, kind of clown-y kind of thing that we’re probably all capable of doing, but when you do that early on, then people go, “Okay, that’s what you do.” And Cory got to show, very early on, the different levels he was capable of, the different frequencies he can throw. He’s just such a beautiful performer. And people talk s**t about this, but in five years, we didn’t have a moment of trauma or static between anybody in this [GOTHAM] world. 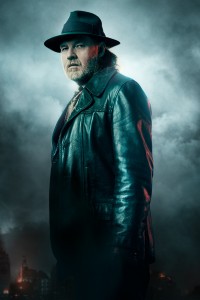 AX: Do you feel like Harvey might eventually become Hank Dolworth, the former police detective/private investigator you played in TERRIERS?

LOGUE: No, they were so different. It’s so bizarre. Like, why is it like that, Cory, right? I’m so strange. Everything I’ve done in probably the last fifteen years or something, I either knew who the guy was immediately, or I didn’t. Harvey is very different than Hank Dolworth, I would say. But Hank Dolworth – I was me. If you watch TERRIERS, that’s just me being me, and Harvey was Harvey.

AX: It was just, Hank had been a hard-bitten detective, and …

LOGUE: Well, they were both trapped in prisons of alcoholism and some weird sadness and some loneliness. You didn’t get to see Harvey’s behind the scenes. That’s an appropriate point.

SMITH: The Riddler did not get closer to me, I will say that, so … No, I have maybe gotten closer to the Riddler [laughs].

AX: Not asking for spoilers, but what has been your highlight on the show so far for your performance?

SMITH: Of all five years, of this season? 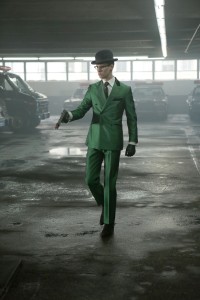 LOGUE: I’d say my favorite moment – I had so many, but my favorite moment was on the pilot, when we drive Penguin [played by Robin Lord Taylor] to the pier and I tell Jim Gordon [played by Ben McKenzie], take this dude out, march him down there, and shoot him, save us a lot of hassle. It was there in the pilot [laughs]. It was there with Robin and Ben, and it was freezing, and it was beautiful. There are too many, but I would say, that was an awesome one.

SMITH: I think probably the – it’s not necessarily – it’s my favorite moment maybe in the arc when, at the end of Season 1, I’m protecting Kristen Kringle [played by Chelsea Spack], and I try to pick a fight with this cop who’s half a foot taller than me, and I stab him and then I just keep going. And it was a year of this guy, of [pre-Riddler] Ed, being so pent-up and so frustrated, and him being denied friendship and attention and no one taking him seriously, and it was the first time that I felt like he was letting go, and I was overwhelmed by the fear and the exhilaration. It was the moment I felt like, “I am part of this show now. This is someone who belongs on this show.”