The actor talks his character's conflict 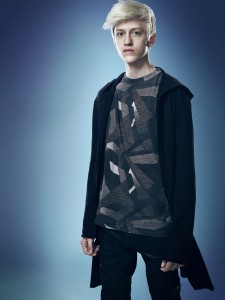 In Fox Networks’ THE GIFTED, now in its second season on Tuesday nights, Percy Hynes White plays mutant Andy Strucker. Still in his teens, Andy has learned that he is not just a powerful mutant, but that he and his equally powerful sister Lauren (Natalie Alyn Lind), through their newly-empowered father Reed (Stephen Moyer), are descended from the infamous Von Strucker siblings, who helped created the Hellfire Club. Unlike Lauren and Reed, and regular human mom Caitlin (Amy Acker), Andy is ready to engage in open warfare against humans. He breaks away from his family and joins the violent mutant faction the Inner Circle, hoping he can convince Lauren to join him.

While still young himself (albeit a little older than Andy), White has amassed an impressive amount of credits, including arcs on DEFIANCE, MURDOCH MYSTERIES, BETWEEN and ODD SQUAD, and film roles in CAST NO SHADOW, NIGHT AT THE MUSEUM: SECRET OF THE TOMB, A CHRISTMAS HORROR STORY, and AGE OF SUMMER.

ASSIGNMENT X: Did you know before it happened that Andy was going to break bad?

PERCY HYNES WHITE: Yeah, I had a feeling from the transition from the first to the second season that Andy was going to go down more of a dark path, because the end of the first season, he joins this other group and breaks off from his family, which gave him more freedom to do what he wants, which I think has more of an edgier side. So yeah, I definitely thought that that was what was going to be the case.

AX: You and Andy both started off the series with dark hair. Now Andy has blond hair. Was that your idea, or production’s idea?

WHITE: The blond hair just happened on its own. My friend dared me to dye my hair blond, and I did, and then they just wrote it in. It was cool.

AX: I thought maybe it was a sign of allegiance to the cloned blond Frost sisters, played by Skyler Samuels …

WHITE: Yeah. That’s what everyone was joking about. Everyone was saying I was copying [laughs].

AX: Do you like the way Andy’s powers look onscreen? They’re generally depicted with practical effects, so something is happening on set, as opposed to being added later with CGI …

AX: From the audience point of view, it’s not entirely clear where Andy stands. Do you think Andy is expressing more loyalty to the violent Inner Circle than he actually feels, or do you think Andy is really becoming as anti-human as the rest of that group? 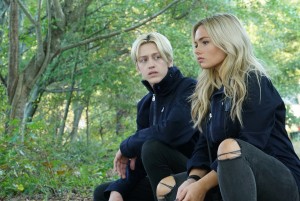 WHITE: I think he’s just confused about where to stand, and he thinks he’s doing the right thing, but he has some doubts. He’s conflicted.

AX: Andy keeps trying to persuade his sister Lauren to join him, but she keeps refusing. Is one of the reasons that he’s confused is that Lauren isn’t buying in?

WHITE: Yeah. He definitely wants his family to be on his side, so that’s causing conflict, for sure.

WHITE: Yeah. I’m going to be in the remake of THE TWILIGHT ZONE, which premieres on April 1 on CBS All-Access.

AX: Did you get to work with Jordan Peele, who’s executive producing and hosting this new version?

WHITE: No. They’re just going to green-screen him in.

AX: And what would you most like people to know about the rest of Season 2 of THE GIFTED?

WHITE: They should watch it.