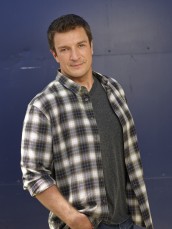 The actor/executive producer talks about his latest hit ABC series 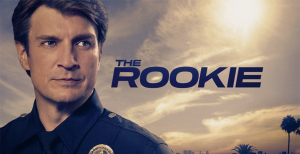 After eight years as the title character on ABC’s CASTLE, Nathan Fillion is back on that network in another eponymous role as THE ROOKIE. Fillion, also an executive producer, plays John Nolan in the Tuesday-night freshman series. THE ROOKIE is created by Alexi Hawley, who previously was an executive producer and show runner on CASTLE.

Based on a real person who did this (but wishes to remain anonymous as he is still on the force), John Nolan is in his forties, struggling with an unfulfilling career and a failed marriage in Pennsylvania, when he is caught up as a hostage in a bank robbery. When the ordeal is over, Nolan reevaluates his life and decides to join the LAPD. He makes it through the academy, but a lot of his superiors and fellow officers are skeptical of whether someone of Nolan’s age can hack the rigors of police work.

Fillion, originally from Alberta, Canada, became a sci-fi icon in the short-lived but beloved series FIREFLY and its big-screen follow-up SERENITY. Fillion’s recent credits include being an executive producer and costar on CON MAN, which is Alan Tudyk’s satirical take on the sci-fi convention scene surrounding a fictional series not unlike FIREFLY, plus appearing in arcs on SANTA CLARITA DIET, A SERIES OF UNFORTUNATE EVENTS, BIG MOUTH, MODERN FAMILY, and AMERICAN HOUSEWIFE.

ASSIGNMENT X: After eight years of playing Richard Castle in a one-hour series, were you thinking you might like to do a half-hour comedy at this point, or were you just open to whatever was happening?

NATHAN FILLION: That’s so often the question, is people think, “Why don’t you do this next?” And it doesn’t really work like that. You don’t say, “You know what? Now I’m going to do a half-hour,” and I just pick up the phone and get the job. The jobs come, and you get attached to projects, or you try out for them, and sometimes you get them, and sometimes you don’t – more often than not, you don’t. But this one came along, and I just couldn’t say no. 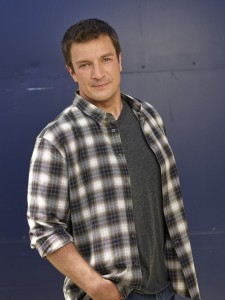 FILLION: And there were little projects I did here and there that were far less of a time commitment, doing little jobs with friends, and little pieces of shows that I’m a big fan of, like MODERN FAMILY, for example. I’m such a huge fan of that show, dying to do a role on that show.

AX: What made you decide that THE ROOKIE was the one you wanted to do in terms of making that time commitment?

FILLION: The auspices. I use the sandwich analogy. If I tell you I’m going to make you a sandwich, it’s going to have the freshest bread, the best deli meats, Dijon mustard – you haven’t tasted it yet, but you know it’s going to be a great sandwich. THE ROOKIE kind of came to me like that. It was all the ingredients. We didn’t have the sandwich yet. It was really neat to be a part of it, and watching it evolve, and watching it develop, and because we did it early, we had everybody that we wanted. We had our pick of all the actors in L.A. There was nobody casting at that time. Everybody we wanted, we got. And that’s rare, that’s very rare.

AX: You’d worked with Alexi Hawley on CASTLE. Was he a part of why you wanted to do THE ROOKIE?

AX: Once you got THE ROOKIE, were you happy about getting to play somebody who’s a little more down to Earth?

FILLION: You know what’s nice is that John Nolan is more reality-based than what I’ve been playing for awhile. It’s nice to get back to a little bit of drama, yeah.

AX: John Nolan’s age is a big part of the premise. How did you feel about that?

FILLION: It is a natural progression of anyone’s career. You get older. That’s what it is. I’m just grateful at this point in my career I’m still somewhat relevant and still gainfully employed.

AX: Did you know much about the LAPD before getting involved in THE ROOKIE?

FILLION: Only from when I’ve been pulled over [laughs].

FILLION: I’ve never got a ticket in L.A.

FILLION: You know what? I’m very hyper-critical of my own work. I think a lot of actors are, I think it’s hard to watch yourself with an unbiased lens. But watching this show entertains me, and it tickles me, and I’m a tough audience. So come and check it out. I think you’ll be pleased.