THE GIFTED: Skyler Samuels on Season 2 of the Marvel mutant series – Exclusive Interview 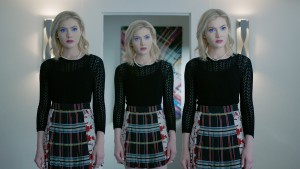 In the first season of Fox Networks’s THE GIFTED, now in its second season on Tuesday nights, Skyler Samuels recurred, and recurred, and recurred. In Season 2, Samuels and her characters – identical mutant sisters Esme, Sophie, and Phoebe Frost – have been upped to series regulars. In THE GIFTED, which is set in the universe of Marvel Comics’s THE X-MEN, the telepathic Frost sisters can not only read minds, but put thoughts into the minds of others. They are part of the Inner Circle, a group of powerful mutants who want war with ordinary humans (as opposed to the Mutant Underground, who just want peaceful coexistence).

Samuels’s previous credits include THE WIZARDS OF WAVERLY PLACE, THE GATES, THE NINE LIVES OF CHLOE KING, AMERICAN HORROR STORY, and SCREAM QUEENS.

When Samuels appears in scenes where more than one triplet is onscreen, she works with other actresses who have their faces and voices digitally replaced with hers in post-production. In this exclusive interview – with some input from THE GIFTED costar Blair Redford, who plays John Proudstar, Samuels talks her triple-threat job.

ASSIGNMENT X: Were you a Marvel or a DC  Comics fan before you got involved with THE GIFTED?

SKYLER SAMUELS: I grew up in a house with three brothers. So there was a lot of X-MEN and Marvel in the background of my life. I think this is the first job I’ve ever done that my brothers think is cool, so that’s a huge accomplishment in my book.

AX: You have a fairly different look in THE GIFTED than you do in real life …

AX: Did you have input into the Frost sisters’ look, or did the production just say, “This is how we’d like you to look, go with this”?

SAMUELS: Yeah, we worked pretty closely. We tried to make the Frost sisters look as much like the comics as possible, so very polished, very preppy, don’t you think? They’re very preppy, very polished, lots of pointy boots and edges. They’re sort of a severe-looking group of people. But it’s fun. 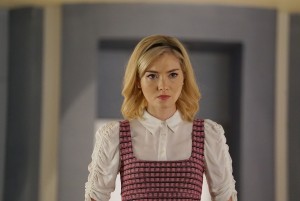 AX: The Frost sisters are visually identical. How alike are they personally?

SAMUELS: She’s triplets. I play three different people on the show. So we’re identical, but they’re three different characters, slightly different voices, different personalities. And we get to see a little bit of each of them more [as the series continues].

AX: When they get involved with people, are they attracted to different people, or do they have similar taste in romance?

SAMUELS: I don’t know. I guess we haven’t really dealt with that on the show, at least not yet, anyway. They’re different. They’re three different people. I think they’d fight too much over one. If it was for a guy, I think we’d need three. Who knows? Maybe there are male triplets out there for us somewhere.

AX: Do you have to shoot in any kind of technique to replicate yourself onscreen when the triplets are all together in a scene?

SAMUELS: Yes. Over and over and over again [laughs]. It takes a long time to film the triplets. I have to film everything in each position, and there are two really awesome girls who play my other sisters who will stand and read lines with me as the other role, and then we switch. So I alternate back and forth. Blair’s seen me do it a few times. It takes awhile.

BLAIR REDFORD: It takes a ridiculous amount of time. [joking] When I’m commuting to work in the morning, having a pleasant time with my coffee, and I look at my call sheet to remind myself of what I’m shooting, and I see I’m working with her and her sisters, a dark cloud moves across the sky on the way to work, and I’m like, “Oh, this is just great. It means that I have to shoot everything ten times more than normal.” So no one likes working with her.

SAMUELS: To answer your question, Blair’s favorite characters on the show are the Frost sisters. That’s what he was trying to say.

REDFORD: That’s what I was getting at, yes. 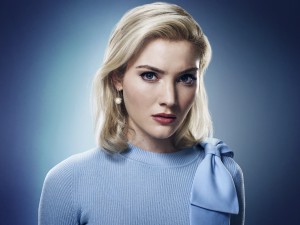 AX: Do you ever feel at all like you’re making a show about the Weather Underground, or something like that – that is, an underground group fighting against the government?

AX: What would you most like people to know about THE GIFTED right now?

This interview was conducted during Fox Networks’ party for the Television Critics Association (TCA) press tour.