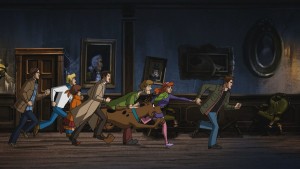 SUPERNATURAL is a series where the characters can legitimately try to figure out what they ought to do next based on “the last time we were sucked into a television show.” SUPERNATURAL, as we know, runs the gamut from the dead serious to the insane to the supremely silly. “ScoobyNatural” falls into this last category, with Sam (Jared Padalecki), Dean (Jensen Ackles) and even Castiel (Misha Collins) being sucked into an episode of SCOOBY-DOO and turning animated.

The episode starts with an earlier absurdity – Dean and Sam are in the back of a pawn shop in a battle to the death with a fluffy green human-sized dinosaur toy. The Winchesters win the battle, but pawn shop proprietor Alan (Michael Girardin) is so stunned by the weirdness and grateful for having his life saved that he says the boys can pick out anything they want as payment. Sam is all for doing good for its own sake; Dean walks out with a giant flat screen TV at the same time that Alan’s pal Jay (Peter New) walks in.

In next to no time, Dean has set up a man cave to showcase the new TV. However, once he turns it on, a purple light emerges and, zap, Sam and Dean are suddenly cartoons. More, they recognize they’re in SCOOBY-DOO.

Dean, of course, is a major SCOOBY-DOO fan and can guess developments in the episode. He also resents Fred (voiced by voice actor great Frank Welker) and wants to seduce Daphne (voiced by Grey Griffin). Sam wants to warn the Scooby Gang that “ghosts” aren’t always evil real estate developers in masks, but instead are sometimes the real thing. An actual deadly ghost seems to be stalking a mansion and kills several people. At this point, even skeptical Velma (voiced by Kate Micucci) is convinced that Sam is right and the supernatural is real. 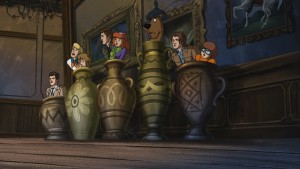 Then Sam and Dean finally get to the real ghost (Kegan Frith), a benign little boy who just wants to be reunited with his father, but who has been entrapped by “the bad man.” “The bad man” has used the little boy’s pocket knife as a talisman to force the young ghost to inhabit objects like the stuffed dinosaur and Dean’s flat screen to hurt people. Sam and Dean promise to free the child. Sam and Dean then have to convince the Scooby Gang that there aren’t ghosts after all, that it was all an evil plot (the little boy uses his powers to make the Scoobies see things that prove Sam and Dean’s point).

Back in the real world, Dean breaks his beloved flat screen to retrieve the pocket knife. He and Sam burn the pocket knife, freeing the little boy’s ghost. Then they return to the pawn shop and confront “the bad man,” Jay, just as he’s about to foreclose on Alan. It turns out that Jay really is an evil real estate developer. Jay says that nobody is going to believe their story about his use of a cursed object. This is true, but Sam points out that Jay has also not paid his taxes. As the police show up, Dean mystifies Castiel and mortifies Sam with his episode-ending imitation of Scooby-Doo.

All of the SCOOBY-DOO animation looks perfect, and SUPERNATURAL even employed Jim Krieg & Jeremy Adams, both long-time SCOOBY-DOO writers, to script the episode. There are a lot of swell moments here, including a double meta dialogue nod to BUFFY THE VAMPIRE SLAYER (which had its own Scooby Gang). Matthew Lillard, who played Shaggy in the two most recent live-action SCOOBY-DOO movies, voices that character here. 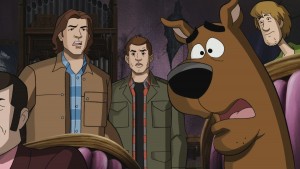 It should be said that Sam and Dean don’t look quite right as animated characters, though eventually Dean’s emotions in particular amusingly match those of Ackles. It’s pretty funny to see animated Castiel running around carrying Shaggy and Scooby together, and animated Dean availing himself of giant Scooby/Shaggy-sized sandwiches. Mainly, it’s amazing to see how these two series that have so many differences can work together seamlessly.

SCOOBYNATURAL doesn’t have the meta perfection of the FAN FICTION episode, but it’s got a high-as-a-kite absurdity that’s a truly enjoyable break from reality, ours and theirs.