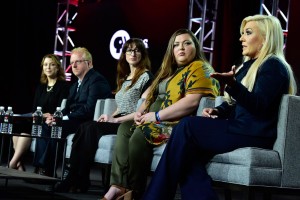 As FRONTLINE executive producer Raney Aronson Rath describes it, “Sex Trafficking in America” explores “a hidden epidemic. It’s happening across the country in every state, at alarming rates. And children and teenagers who are online are increasingly at risk. Our team has spent almost three years embedded with an undercover police unit in Phoenix, Arizona, that is trying to tackle this dangerous issue.”

The “Sex Trafficking in America” investigative team is headed up by the award-winning duo director Jezza Neumann and producer Lauren Mucciolo, who together spoke with ASSIGNMENT X.

ASSIGNMENT X: Did FRONTLINE come to the two of you with this project, or did bring it to FRONTLINE? And since you’re British, was there any thought of doing this in the U.K. instead, or are there different problems regarding sex trafficking in the U.K.?

JEZZA NEUMANN: I came to FRONTLINE with it, and I’m also making it for a U.K. broadcaster, Channel Four, as well. So they’ll have a version of the film, and there will be a version for FRONTLINE as well.

AX: Is the version for Channel Four more U.K.-oriented?

NEUMANN: Yeah. We’re still in the process of editing it, but there will be different elements of the story that a U.K. audience might be interested in, that an American audience might feel they’re already familiar with, so yeah, there’s bound to be some differences between the two.

AX: Do the two of you normally collaborate with each other, or did you come together for this project?

LAUREN MUCCIOLO: We’ve worked together before on a film called POOR KIDS [which aired on FRONTLINE is 2012 and won an RFK Journalism Award]. That was the first time we worked together. We do have a relationship where we work together a lot of the time, so we’ll be looking into other projects together as well.

AX: For the film, you interview some people who have escaped from being trafficked. Do you find that these people feel that there is some emotional help for them in speaking with you, or are they worried that whoever trafficked them will see the documentary and come looking for them?

NEUMANN: So the thing is a mix of both, really. In the initial stages, of course, naturally, we’re journalists. In the eyes of many, there’s an element of mistrust [in talking with journalists] – what are we about? But Lauren and I work together, it’s just the two of us. We shot it together, it was only us, and so we spent a lot of time, investing time with the contributors, getting to know them, getting to know the detectives [who investigate trafficking], getting to know people like Mariah [one of the people who escaped from being trafficked], before we ever start filming anything, to make sure that she’s absolutely comfortable with it. We also said to Mariah, when we filmed with her and when we filmed with the other people in the film as well, if after we film it, they have a change of heart, it’s ongoing consent to her. Because you never know when she might have a trigger, and have a setback. So it’s very important to us that we form that relationship. That means that by the time she does talk to us about it on camera, you can ask her, but most people find it cathartic, and that’s what’s important to us. We want the process of making the film to be, for those people in it, to own it, and for it to be an important process. It’s not just about making the film at the end. 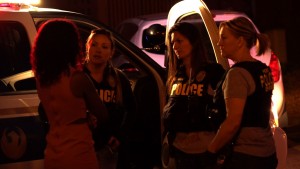 AX: What drew you to this topic in the first place? Did you see other reports about it, did you know someone who had some experience with this universe and went, “Let me do what I can to help …”?

NEUMANN: I was looking for another film subject to make films on. I’ve made a film about trafficking in China before. And so I was looking at this issue, and I actually spoke to a friend of mine, Professor Kevin Bales, who has written several books on modern human slavery. When I spoke to him, he said, “Well, have you looked at the situation for domestic trafficking in America? Because I think many people don’t fully understand it, and there isn’t huge awareness of it.” So at that point, I thought, “Okay, this sounds really interesting.” So I spoke to Lauren, I phoned Lauren and said, “Hey, what are you doing at the moment?” And this was an area that also had interest to Lauren. And so that’s what drove it. And the more we looked into it, the more we realized there was a lot of awareness we could raise through it.

AX: What would you most like people to know about “Sex Trafficking in America” on FRONTLINE?

NEUMANN: I’d really like people to know that there’s strong human interest in this film, and I hope that we will be able to explain the situation of trafficking. It’s a very complex issue, and hopefully, we were able to simplify that to a level that people understand it and get it, and they can really connect to the human stories that are contained in it.