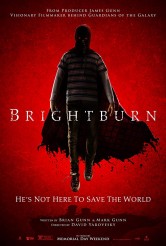 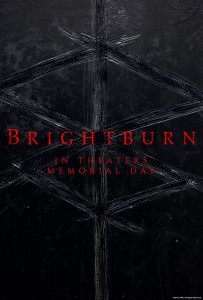 While BRIGHTBURN touches on various mythologies, it is most closely linked to that of Superman. Like SUPERMAN, BRIGHTBURN deals with a human-looking baby, found in what is clearly a (very small) spacecraft by a sweet, childless couple, Tori (Elizabeth Banks) and Kyle Breyer (David Denman), who raise the boy as their own. The title of BRIGHTBURN turns out to be the name of one of those towns that figure in super origin stories, like Superman’s Smallville; we’re even in Kansas.

The difference, as is made clear in BRIGHTBURN’s advertising, is that young Brandon Breyer (Jackson A. Dunn) is not here to make the world a better place. He seems perfectly normal, and agreeable, until right around his twelfth birthday. Then he starts muttering to himself in a fugue state, having temper flare-ups and then discovering that he has unusual abilities (which, again, will be familiar to anyone even slightly conversant with Superman).

This would seem to set us up for an investigation of the superhero genre and its tropes. However, writers Brian Gunn & Mark Gunn and director David Yarovesky seem a lot less interested in the questions posed by their premise than they are in making a straightforward horror movie. We’re set up for scares from the start, and once the gore starts, it goes for broke. This works very well on the horror level. Even Brandon’s choice of super-garb – a mask made from clothing – is casually reminiscent of the Cthulhu mythos. It’s all nicely creepy.

What’s less successful is what looks like an effort to do something larger. There’s a classroom scene early on that explains everything to such a degree that it seems like it should have been saved for later in the proceedings. Instead, we immediately question the intelligence of Brandon’s parents. Yes, we’ve accepted for eighty-plus years that the Kents found baby Kal-El in their field and kept that big secret, but the Superman story originated in 1938, and maybe readers should have been skeptical even then. In the present, it’s not so much that we don’t believe Tori and Kyle never tried to tell anybody about the spacecraft that crashed into their property. After all, we know that real people do all kinds of stuff, some of it very ill-advised. Instead, we start thinking some variation of, “What did you expect? You brought this on yourselves, you twits.” We’re supposed to sympathize with these folks, not feel like they should have at minimum done some research on UFOs between finding baby Brandon and now. They also seem surprisingly unprepared for even the possibility that their foundling son might show some uncommon traits.

There are also some just plain off notes. Some character beats are simply not followed up. In some cases, this is arguably a good thing; Brandon’s stalking of a female classmate is unsettling enough as it is. What is meant to be an amusing scene of father/son bonding is off-putting, not because of how Brandon interprets it, but because Kyle’s unadorned advice is awful. 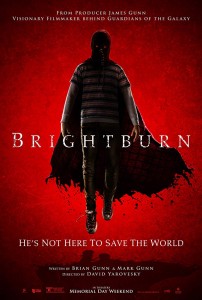 It’s clear that BRIGHTBURN was made on a budget. All of the effects involving Brandon’s powers, especially the makeup, are terrific. Special makeup effects designer Justin Raleigh and his team deserve a round of applause. But we have a barn full of hay, with no sign of cows or horses. We don’t have to see them, but either there ought to be a couple of “moos” on the soundtrack, or else we should get some explanation of what happened to the large livestock. (We do see chickens.) We also have establishing shots of businesses with oddly empty parking lots, when depopulation is not the point.

In most superhero stories, the main character goes through a period of wondering what he should do with his powers. Brandon learns by doing, but we never get a moment of suspense as to which way he’s going to go. Dunn is excellent at seeming normal to the audience, seeming normal to other characters while subtly showing us that he’s not normal, and then expressing icy fury.

Early on in BRIGHTBURN, the movie takes on the aura of a supernatural, not superhero/super-villain, tale. It feels wrong to criticize a film for what it isn’t, except that BRIGHTBURN’s ambitions are stated so definitively. It succeeds as a contained horror movie, but not as an inversion of comic book lore.