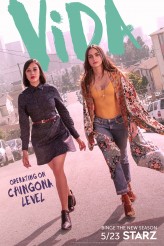 The executive producer talks about her ground-breaking comedy-drama 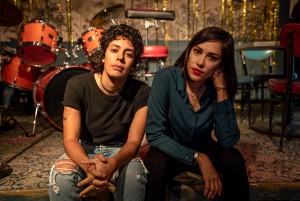 Starz’s idiosyncratic comedy/drama VIDA begins its second season on Sunday, May 26. Created by Tanya Saracho and shot on location in East Los Angeles, VIDA deals with previously estranged sisters Emma (Mishel Prada) and Lyn (Melissa Barrera), brought together by the death of their mother Vidalia. In Season 1, Emma and Lyn grappled with their inheritance of Vida’s lesbian bar, its attached low-income apartments and its gigantic mortgage. Emma also coped with finding out that Vida was married to a woman, Eddy (Ser Anzoategui), a particular shock as Emma had been sent away in adolescence when Vida learned her eldest daughter was a lesbian. Lyn, meanwhile, briefly rekindled a romance with old flame Johnny (Carlos Miranda), even though Johnny is now married and expecting a baby with wife Karla (Erica Lupo).

In Season 2, Emma, Lyn and Eddy are determined to make a go of the bar, fending off predator would-be gentrifiers while still trying to figure out who they are in the world.

Creator/executive producer Saracho sits down for a talk about all things VIDA.

ASSIGNMENT X: Were you surprised or just gratified when VIDA was picked up for a second season?

TANYA SARACHO: Gratified. I wasn’t surprised, but I also wasn’t expecting it. I was in this state of numbness, because I’ve never done this before. I don’t know how they choose – anybody, not just Starz – I don’t know how it works. But I know that the reaction was so lovely. We have a 100% Certified Fresh on Rotten Tomatoes, that was surprising, because almost all of the eyeballs watching it were getting it. You’re coming into this world that might be foreign for some people, but you all got it. So that was the surprising part. But I’m just grateful about the second season. 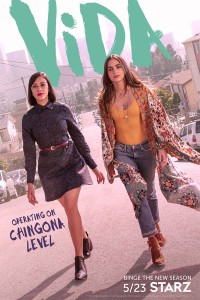 AX: Was VIDA Season 2 at all planned out when you did the first season, where you thought, “Well, if we get a second season, this is what’s going to happen,” or did you get to the end of first season and go, “Okay, now what?”

AX: In Season 2, it seems like one of the main themes is going to be the struggle for the financial stability of the building. Is Eddy going to have any physical repercussions from having been badly beaten up at the end of last season?

SARACHO: The second season starts only about over a week after we left off, so I think you’re going to see evidence that not a lot has moved yet. The whole world has shifted, because Emma has made the decision to stay, and she doesn’t have to deal with Chicago, right? And Lyn has made the decision to be good, basically, but what does that mean? So a lot of stuff has shifted in just a week. But yeah. You’re going to see all of the threats that we began, we’re going to take them up.

AX: Can you talk about the new character Nico, played by Roberta Colindrez?

SARACHO: She’s a bartender, but more than that, she’s an expert in bar culture. Because now we did a different kind of research. This year, our consultants were not just about the neighborhood. Our consultants were about bar culture, and starting and opening bars, and actually taking failing bars, and lifting them. They did a whole business plan for us. And this season, the business plan is the first phase of the thing, the second phase. And Roberta is key in that, the expert, because she’s done it before. She plays a really comfortable queer girl that used to live in L.A. and doesn’t now. She comes in, she shouldn’t help them with lifting, because it’s failing. Once Emma really digs into the books, it’s worse than she thought first season. But Nico has a lot of knowledge, so Nico becomes the secret weapon, a little bit.

AX: Do any of Nico’s answers cross paths with the neighborhood hentefication issue? Is the word actually hentefication or hentrification?

SARACHO: The term we use is hente, meaning “the people.” It is a pun on gentrification, but using the term “hente,” which means people. Some things would have to [cross over into the hentification issue], especially if you’re making improvements. Who are you trying to attract, what clientele, all of that affects it.

SARACHO: That’s the part that I want you to watch. 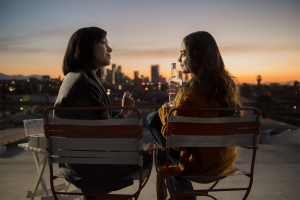 AX: And does Lyn have any idea of what she’s going to do, or wants to do, or what being good means?

SARACHO: That’s what this season is, figuring out both those things, her purpose, and not just her version of what good is, but really, what good is.

AX: Not that they are in any way an under-represented group anywhere, but are you going to have any straight men in Season 2 who are not complete pendejos?

SARACHO: [laughs] I think so. But that’s going to depend on your interpretation of pendejo.

AX: Or complete. For example, Johnny is not someone who should be banished from the face of the Earth, but he’s a bit of a jerk …

SARACHO: You know what? I didn’t know that people going to react that way. Because especially because in our [Latinx] community, cheating is forgiven, which is annoying to me. But people have come for him, dragged him on Twitter. I was very surprised. Like, they won’t forgive him. But it is good. I’m glad, great. I’m glad for Karla, but it’s funny, because [there’s a widely stated opinion that] there’s nothing good he can do, because he’s a cheater. I was so surprised by that [laughs].

AX: Well, especially because his wife is pregnant, so this could have impact on the child as well …

AX: At least in Season 1, you have several bathtub scenes where a character is feeling things deeply and wants to literally immerse herself …

SARACHO: Yes, it’s such a vulnerable place, right? It’s sort of a Delphic pool, where you sort of see yourself, your future, your past, your present in a way. When I’ve taken baths, I sort of leave my body a little bit, especially if they’re warm baths. Eddy really needed to scream in a house that was not hers at the moment, because people with more claim to it were taking space, so she had to go underwater to scream. That says everything about where she is at that moment. And the cleansing that yin takes part in, it’s a metaphor, you’re cleansing, and it’s a spiritual cleansing. It just sets everything up for Season 2, because she’s sort of awakened. She didn’t want to be awakened. She likes the way she’s been steered, but yeah, I guess those moments are about them. But they’re not similar moments, they’re a little bit different.

AX: Well, they’re not similar in what the characters are coming to, but they’re similar in the fact that the person is coming to their center …

SARACHO: Exactly. Yeah. Or trying to go deep to find something out.

AX: Do you know if any bars have come to Starz and said, “Hey, we’d like to call our bar Vida”?

SARACHO: No. I would like to know if that has happened. I have not heard. I know there are a bunch of Vida coffee shops, Vida restaurants, around the country and stuff. But no. We should ask them. When we started this project, people were bemoaning the fact that queer women didn’t have a space in the neighborhood, queer women. I don’t know how much lesbian and femme spaces last. Same thing in Chicago. I can think of one right now. I don’t know why. I don’t know much about it, but I’ve noticed. Sometimes there are lesbian nights that you can go to, but we get a night, we get a Wednesday.

AX: It’s kind of weird that there aren’t more …

SARACHO: Well, we still like to gather, right? I don’t know what it is. I really don’t know why. But I’ve noticed.

AX: Will VIDA be dealing with any governmental political issues this season, like family separation, or immigration policy, or …?

SARACHO: It’s just, how do you do it when you won’t air until months and months [after it is written and shot]? We will have imagery, and people have their opinions on it, but it might be something else has happened [in the interim]. You would notice, when you’re too topical. Do you think that we did not discuss this ad nauseum in the writers’ room? You saw we started this initiative, because we needed to do something, but it didn’t feel like making a whole storyline about it was the thing, because we did not know where we would be.

AX: And nobody knows what’s happening in the next two hours, let alone between the time you make an episode and the time it airs …

SARACHO: Exactly. It changes that fast. So that’s why we’re not touching it with a story, but we are absolutely acknowledging it.

AX: This seems to be a very dynamic moment for LGBTQ television. Do you have time to watch anything, and if you do, do you watch any of the other LGBTQ shows?

SARACHO: Of course, it takes me forever, because sometimes I get home so late, and I only have a little bit of time, but I’m watching POSE. This is not a queer-centric show, but KILLING EVE, I managed to watch that. And of course ONE DAY AT A TIME. But it’s difficult. I can’t finish one episode, especially when I’m writing. Sometimes I just need to watch the news, which is the worst thing you can do, but I sit there, and I’m, “What’s happening now?” And then you get depressed.

AX: Do you sort of take that depression and exorcise it in the writers’ room, or do you just go, “Agghh!”?

SARACHO: You do “Agghh!” and then you also just vent to the writers, because also we’re friends, and we’re like, “What do we do?” Everybody needs that kind of venting time.

SARACHO: BRUJAS is the name of the next thing I’ve sold to Big Beach, they are also doing VIDA, and it’s about Afro-Caribbean witches, brujas, in Chicago.

AX: And what would you most like people to know about Season 2 of VIDA?

SARACHO: These sisters don’t know each other. They have been gone for so long, so we’re going to have to break some bones in their relationship in order to rebuild, and I’m excited to share that.