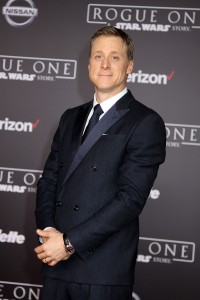 In DC Universe’s DOOM PATROL, now streaming on the DC Universe platform, a group of unlikely, reluctant individuals with odd abilities are brought together by fatherly scientist Dr. Niles Caulder, aka the Chief. The Doom Patrol has its enemies, chief among them Eric Morden, aka Mr. Nobody, played by Alan Tudyk. Mr. Nobody is often literally fragmented. He narrates DOOM PATROL, and it turns out that he’s got good reason to be very angry with the Chief.

Tudyk was nominated for an Emmy Award for his performance as convention-going genre actor Wray Nerely in CON MAN, a Web series that Tudyk also created and produced. Tudyk has plenty of real-life experience on the convention circuit, thanks largely to his role as the spacecraft pilot Wash in Joss Whedon’s TV series FIREFLY and its feature film follow-up SERENITY. Tudyk has plenty of other cult favorite credits as well, including the features A KNIGHT’S TALE, DODGEBALL: A TRUE UNDERDOG STORY, the title character in I, ROBOT, one of the title characters in TUCKER AND DALE VS EVIL, and the android K-2SO in ROGUE ONE. Tudyk has also been a series regular on SUBURGATORY, THE TICK, DIRK GENTLY’S HOLISTIC DETECTIVE AGENCY, and DC’s live-action comedy POWERLESS.

As a voice actor, Tudyk won an Annie Award for his performance as King Candy in Disney’s animated WRECK-IT RALPH. He’s also been heard in numerous other Disney features, worked on a multitude of DC animated superhero series, and is about to be heard as the parrot Iago in Disney’s live-action ALADDIN.

ALAN TUDYK: I got stuck on the title DOOM PATROL from the very beginning, because I hadn’t heard of it before, so I didn’t know what that was. And then once I got into that, I found this brand-new world – I mean, it was a group of friends, superheroes, but a whole different take on what a hero could be, definitely villains, a world of villains – just the world itself. It has science, but also a type of magic and art in it that is unlike any other. And Mr. Nobody, as the super-villain, is not like any other super-villain. He has extreme power, but it’s not his power that is the thing that defines him, really, it’s his mind, and his personality, his view of the world. He’s an absurdist. He sees the world as absurd, and relishes it, and wants to point it out, and expose it.

AX: When he’s narrating, do we know who he’s talking to?

TUDYK: When he’s talking to the third person? What does he say? At one point, he says, “Who are you talking to?” And I say, “I’m talking to … people who got DC subscriptions, Grant Morrison fanboys, and the few people who stuck around after that donkey fart.” So in a sense, that is who I’m talking to. I’m just aware of my audience.

AX: Mr. Nobody sometimes literally flies apart. For that to happen, how are you being photographed? Do they do motion-capture dots on you, or …?

TUDYK: There are no dots. They didn’t do dots. It’s interesting. Having experienced it with the CGI world, and having motion-capture suits, having reference suits on, having fractal suits on, this one, they started out saying, “You don’t even need reference dots.” I don’t even understand how they do it. I don’t know.

AX: But you are giving a sort of motion-capture performance?

TUDYK: Yes. Although they use half of my face. So it is my face, half of it. The good half. [joking] The other half of it, truly has been dragging its feet for years. But yeah. I honestly don’t know how they do it. I asked plenty of times. They didn’t answer me [laughs]. I would have to go into the effects rooms. They must be pulling their hair out. I don’t know how they do it. But it looks great. I look really cool.

AX: Are you physical in a lot of scenes with other people, or do they have to shoot you separately and add your performance in post-production?

TUDYK: No, I’m in scenes with people. It’s a performance in that way. And as the show goes on, because I kidnap the Chief, I’m with Timothy Dalton most, not only, but most of the time I’m with Timothy, and I’m not CGI at all. So there are some places where I do some CGI and some not. 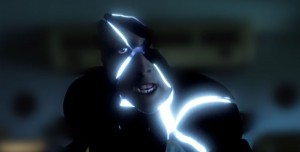 AX: Is Mr. Nobody feeling righteously aggrieved towards the Chief?

TUDYK: Yes, absolutely. I have a very longstanding grudge against this man for things he’s done to me, and I’ve chosen to be his nemesis.

AX: How is it playing nemesis-y scenes against Timothy Dalton?

TUDYK: Fantastic. I’m really enjoying myself. I love his work, and he’s one of those actors that makes you a better actor.

AX: Do you have a favorite scene you’ve done in DOOM PATROL?

TUDYK: Any scene that I’m with just Timothy Dalton. He and I squaring off, the two of us, all of those scenes have been a fun challenge.

AX: Do have any sort of preference in work terms between doing a character like Mr. Nobody that’s combining CG and live action, or the voice work, or stuff where you’re non-CGI?

TUDYK: I’m glad I get to do it all. It all has its own challenges, truly, like K-2SO is a physical challenge in a lot of ways, because his face doesn’t move around, so a lot of the emotion is carried in his body, the story has to be told through his movement in a specific way. If I could do anything, it would be theatre. I like theatre. It’s where I came from. Until I’m doing theatre, and then I’m going, “My God, this is the hardest thing I’ve ever done.” Every time, it is the hardest thing you’ve ever done. But it is where I started. I like acting, I like thinking about acting, and studying acting, so that’s the place to do that.

AX: You’ve voiced a lot of characters for DC animation, so were you sort of in the DC family when they came to casting DOOM PATROL?

TUDYK: I guess so. I don’t know where it comes from. I feel like, once you’re in the sci-fi world, if you’ve been around for awhile, then when you’re casting a sci-fi thing, you’re going to maybe think about those people. I’m doing another DC Universe thing that comes out in October. I’m doing the animated HARLEY QUINN. I play the Joker. So I am in that world right now.

AX: Are you looking at anybody else’s Joker?

TUDYK: No. I mean, you can’t help but know the other Jokers, like Jack Nicholson. I started with Cesar Romero, growing up with Adam West’s Batman. [does Cesar Romero’s “ooh-hoo-hoo-hoo” laugh] That guy. So I’ve heard some of it; there’s some of that in there. I feel like it just becomes an amalgam of all the people we’ve seen do it, and plus your voice, plus the writing, and what’s coming at you as far as emotion and storytelling.

AX: Do see any similarities at all between Mr. Nobody and Van Wayne, your resentful character from POWERLESS?

TUDYK: Van Wayne? No. Joker, maybe, but not Van Wayne. The Joker, because he’s an agent of chaos. But it’s different. Mr. Nobody is not as sadistic. He’s more curious as to what will happen. It’s like a game. But I can say that about the Joker, too, at times. 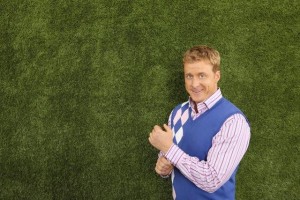 AX: You did two seasons of CON MAN. Are you doing any more?

TUDYK: I’m not. I was exhausted after that. Just that last year [of CON MAN] was really hard, because I was doing POWERLESS and STAR WARS [ROGUE ONE] at the same time. The good thing about doing your own thing is, you can stop it when you want. If we had a contract with somebody that was like, “You have to do seven years [of CON MAN],” then we would still be doing it. It felt like there are a lot of things that are left unanswered; we set it up for a third season, because I originally conceived it to be longer. But I actually looked around and saw a lot of shows about actors struggling to make it as actors. And I was annoyed that I had written a show about actors struggling to make it – even though it was in a brand-new world that hasn’t been done before, I felt like it had been done, and was being done everywhere I looked.

AX: Do you think that you will do another project like CON MAN, in the sense that you’re writing and producing it?

TUDYK: I may. I don’t know. I’ve got a couple of things that I’m working on that I haven’t pursued in any serious way as of yet. I’ve been really busy acting. That’s the thing about acting. There’s quite an allure to it, because I enjoy it. Also, [compared to producers] you show up late, you leave early [laughs], and it pays well. So to take on another project, I would do it, but CON MAN took over my life for three years. Truly. Everything was that for three years. So I’d have to clear it with my wife. She’s a choreographer.

AX: What do people most know you from now? Originally, it was FIREFLY, but then you’ve done so many other high-profile things as well …

TUDYK: Right. It depends on your age. Different people know you from different stuff. If I go to a convention, like Comic-Con, and I’m signing, people are coming up and I get a chance to talk to somebody, the thing that I get the most is FIREFLY. It’s in that setting. Even though I’ve been in STAR WARS and been in all these other big worlds, I’d say fifty percent of the people I meet are FIREFLY fans. Isn’t that great?

AX: Has winning an Annie Award done anything for you? Does Disney have to pay you more now?

TUDYK: I don’t think so, no. It doesn’t make any difference there. But after King Candy in WRECK-IT RALPH, I got castable in a way that I hadn’t been, or I just got cast all over, in voiceover, that I hadn’t been. I had done a thing here, and a thing there, and years in between [without doing voice work]. And then after that, I was doing two and three series [simultaneously].

AX: Have you done anything with Marvel?

AX: Well, you’ve done a lot of work with Disney, and they own Marvel, so …

TUDYK: Yeah, right. Disney. I’m not in Marvel. Yet. I can hope. There’s still time. 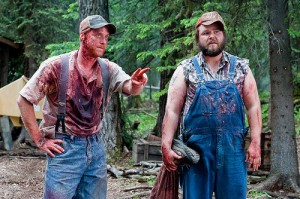 Alan Tudyk and Tyler Labine in TUCKER AND DALE VS. EVIL

AX: And what would you most like people to know about DOOM PATROL?

TUDYK: DOOM PATROL, if you don’t know it from the comics, it’s its own thing, in a good way. It reminds me a little bit of GUARDIANS OF THE GALAXY. When I first heard of GUARDIANS OF THE GALAXY, and I heard, “Rocket Raccoon is a raccoon, but he’s got guns – oh, he’s not a raccoon? But he looks like a raccoon. But he talks, and he hangs out with a tree. This doesn’t make any sense. This is going to be a superhero-y type thing?” Trying to wrap your head around that, and then it works so well. That’s similar to this. “There’s a robot – there’s a robot man. He’s called Robotman.” “That’s his name, Robotman?” “Yeah. Well, he’s just his brain inside of a robot.” “So he’s a super-brain?” “No, he was just a racecar driver.” “So he’s just a racecar driver inside of a robot, but he’s a superhero?” “Kinda.” It’s like that. It’s a lot of fun, it’s funny, but it can also get dark.