There and back again, as another Sam might say 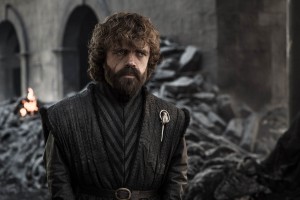 It’s often hard to know what to say at the end of a beloved series. With GAME OF THRONES, there is certainly an argument for ending it as its makers have done. Philosophically, though, the show itself takes after protagonist-turned-antagonist Daenerys Targaryen (Emilia Clarke). Loyalty and love go a long way toward justifying actions that feel increasingly unacceptable.

The episode “The Iron Throne” is largely a series of long scenes. Tyrion (Peter Dinklage) walks through the rubble, past dead and dying people. Tyrion briefly encounters a very troubled Jon Snow (Kit Harington) and Ser Davos (Liam Cunningham), then goes alone to see what became of his siblings, Cersei (Lena Headey) and Jaime (Nicolaj Coster-Waldau). Tyrion takes the route he urged Jaime to use to escape with Cersei. Tyrion finds Jaime and Cersei’s corpses covered in rubble from when the chamber collapsed upon them. He weeps.

Jon tries unsuccessfully to dissuade Grey Worm (Jacob Anderson) and his Unsullied soldiers from executing prisoners, men who (reportedly) freely supported Cersei. Jon then encounters Arya (Maisie Williams). Shocked to see his little half-sister/actually cousin, Jon tells her it’s not safe. Okay, Jon doesn’t know about Arya’s assassin training, but everybody in Westeros knows she killed the Night King. It would make a lot more sense for Arya to tell Jon to go somewhere safe, but neither of them goes anywhere.

Tyrion, Jon and Arya all hear Daenerys address her triumphant troops in their native tongues. Once the Unsullied were slaves. Now they are liberators. Daenerys names Grey Worm her Master of War. Daenerys says that now that they’ve liberated King’s Landing, they must go liberate the rest of the world, and break the wheel. She names Winterfell as one of the places that needs liberating. Uh-oh.

Tyrion confronts Daenerys after her speech. She says he betrayed her by freeing Jaime. Tyrion counters, “Yes. And you burned a city.” He throws away the pin signifying him as the Queen’s Hand. Daenerys, unsurprisingly, has Tyrion arrested. 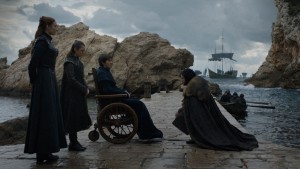 Arya now suggests to Jon that he ought to try to take the throne – Sansa isn’t going to bend the knee. Jon argues that Dany is their queen, too.

Jon then goes to see Tyrion, who seems to be locked up in part of the scullery rather than a normal cell. Possibly the cells are inaccessible due to all the damage. At any rate, Tyrion asks Jon (who was dead, after all) if there’s life after death. Jon says he didn’t see anything. Tyrion says oblivion is probably the best he can hope for. He again presses Jon to overthrow Dany. Tyrion says he loved her, too, he believed in her wholeheartedly. But the thing is, Dany is convinced she is right. Why wouldn’t she be? She killed the slavers, she killed the Meereen nobles (who wanted to reinstate the slavers), she killed the Dothraki khals who were going to kill her. “Everywhere she went, evil men died, and we cheered her on.” She really believes she’s making a better world. With that belief, she feels justified in killing anyone she sees as standing in her way.

And here we have the philosophical break referred to earlier. Some people can take what looks like a positive use of power and turn it into genocide. It happens in the real world. But to say that overthrowing slavery creates a taste for violence that leads to wanton destruction – and this isn’t given as an opinion that can be countered, it’s provided in Tyrion’s voice of authority – is to suggest that the status quo should never be altered. This is almost as unpalatable as Sansa’s (Sophie Turner) speech a few episodes back about how her experiences have made her strong. Rape is not a helpful part of a woman’s development. Arya and Brienne (Gwendoline Christie) are both strong, sane women (well, mostly sane, in Arya’s case), who have matured powerfully without having had to endure rape. Okay, back to the recap.

Tyrion is crying, Jon is crying. Jon still insists that Daenerys is their queen. He says goodbye to Tyrion.

The throne room has been largely destroyed, leaving the Iron Throne exposed to the open air, with a great view of what’s left of King’s Landing. Daenerys sees the throne. She almost can’t believe it. She’s finally here.

In the courtyard, Jon starts to pass what he thinks is a huge pile of ash. No, it stirs and turns out to be a drowsing Drogon. The dragon inspects Jon, then lets him pass.

Jon goes to Dany and tries to get her to say that she’ll show mercy. Dany is very excited by her recent victory. She feels that everything she’s doing is to build a better world (just as Tyrion said). She wants to do this with Jon at her side. Jon, finally seeing that there just isn’t any dissuading Daenerys of her ideas about how to shape the world, comes close, says she is his queen and always will be, kisses her passionately – and stabs her in the heart.

Daenerys dies almost immediately. Jon is devastated. Then Drogon rises into view. He trumpets his grief and prepares his flames. Jon steels himself – but instead of incinerating Jon, Drogon melts the Iron Throne. The dragon then gathers Daenerys’s body up in his claws and flies away. 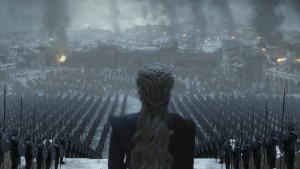 And we pause the recap again. Not that we want Jon dead, but why does Drogon behave as he does? Is the dragon entirely under his own control? If so, why couldn’t he have melted the damn throne in last week’s episode and foregone burning down the city? If not, again, couldn’t the guiding entity have melted the throne and foregone burning down the city? Oh, well ..

Several weeks later, prisoner Tyrion is hauled out of his cell to face a tribunal. The group includes most of the surviving Westeros nobility: Arya, Sansa, their paraplegic brother Bran (Isaac Hempstead-Wright), Maester Sam (John Bradley), Ser Brienne, Lord Gendry (Joe Dempsie), Lord Bronn (Jerome Flynn), Yara Greyjoy (Gemma Whelan), plus a few characters we haven’t seen for awhile. There’s Sansa, Arya and Bran’s uncle Edmure Tully (Tobias Menzies) and, good grief, that’s the grown-up Robin Arryn (Lino Facioli), who has apparently survived his sickly childhood. They’re not sure what to do with Tyrion – or with the still locked-up Jon Snow. Grey Worm wants to execute Jon for treason, and Yara sides with him. She had pledged loyalty to Daenerys. Tyrion says that Jon’s fate should be decided by the King or Queen. Trouble is, there isn’t one. How can one be selected? Nobody mentions Jon’s heritage, which makes it a dragon-sized, tragic red herring. If Jon never knew, or at least never told anyone, Daenerys might never have become so paranoid, but oh, well …

Sam suggests that since whoever is chosen will rule not only over the nobles, but over the common people as well, that everybody ought to have a say. Sam’s suggestion is promptly jeered down, demonstrating that Westeros isn’t ready for full-scale democracy just yet. Tyrion says that the ruler has to be someone people will follow. People respond to a number of things, but one of them is a good story. Tyrion then extols the value of a good story. Okay, however we feel about where GAME OF THRONES has gone lately and where it’s going, its makers have earned this victory lap. And really, if somebody is going to deliver this speech, Dinklage is the right actor for the job. 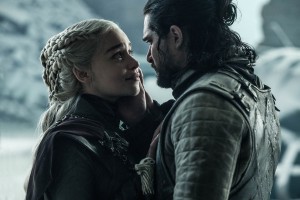 Tyrion concludes by pointing out that Bran has a great story – he survived being pushed out a window and being crippled as a boy, only to become the seer the Three-Eyed Raven. Sansa counters that Bran doesn’t want it, and will not be able to have children. Tyrion sees this as a good thing –from now on, rulers will be chosen, not born. Bran is actually fine with this – it’s why he came down from the North (he foresaw it). He then selects Tyrion as his Hand. Tyrion tries to turn down the position, but Bran insists that if he has to be King, Tyrion has to be Hand. Sansa whispers to Bran that he’s her brother and she’ll always love him, but that the North should be independent as it once was. Bran is also fine with this, so he’s now ruler of the Six (instead of Seven) Kingdoms and Protector of the Realm.

Jon is released from his prison cell. Tyrion explains that if Jon were to be killed, the King, Sansa and Arya would all be very unhappy. However, if he were set completely free, Grey Worm, the Unsullied, the Dothraki and many others would be very unhappy. So nobody’s very happy, which Tyrion thinks is probably the sign of a good compromise. (Not for the first time, we wonder how much meta-commentary is being delivered through Tyrion.) So Bran has decreed that Jon will go back to the Night’s Watch. (At this, we all think, wait, there’s still a Night’s Watch?) Jon says farewell to Sansa and Arya. Arya says she won’t visit Jon at the Wall – she’s going to venture west, beyond where all the maps end. Hey, if anybody is cut out for surviving the unknown, it’s Arya – it’s just that she’s never expressed a desire to leave Westeros before, and weren’t they all talking about the strength of family bonds just two episodes ago?

Everybody says their loving goodbyes. Shortly thereafter, there’s a meeting of the King’s Council. This is Tyrion, Sam, Bronn (now Master of Coin), Davos (Master of Ships) and Brienne. Podrick (Daniel Portman) is the King’s royal wheelchair-pusher, and clearly very proud of his status. The council is arguing over repairing the sewage system and the royal navy. There’s some concern about Drogon’s whereabouts – nobody has seen the dragon since Daenerys’s death. Bran muses that perhaps he can do something about that. Since Bran has the ability to enter the minds of animals, he may well be able to bring Drogon to heel. We do wonder, though, whether he may have done this before (see above).

On a westbound ship, Arya takes in the sea air and prepares for new adventures.

In Winterfell, Sansa is crowned and acclaimed Queen in the North, which she has definitely earned.

At Castle Black, Jon enters the gate and finds the courtyard filled with the Free Folk, headed up by his old comrade Tormund Giantsbane (Kristofer Hivju). Also there is Jon’s direwolf Ghost. Jon has a great reunion with Ghost.  And then all of them, Jon included, go north of the wall, where trees are growing in the snow. The Castle Black gate closes behind them.

And that’s it. The darkening of Daenerys seems like an arc that needed a few more beats. Bran taking the throne was obliquely foretold, so that seems earned without being underscored too early. The survivors have endings that are about as happy as they’re capable of being, and Westeros is about as well run as it’s likely to be for a good while.

There was no way in this world or the Seven (or even Six) Kingdoms that the makers of GAME OF THRONES could craft a conclusion that satisfied everyone. In the end, this viewer felt that a good and intricate story had been told, but that many of its great moments, which might have provided joy in recollection, had burned away in the telling. It’s the difference between something some indivuals can respect and admire and analyze, and something those same individuals would actually want to watch again.