TV Review: GAME OF THRONES – Season 8 – “A Knight of the Seven Kingdoms” 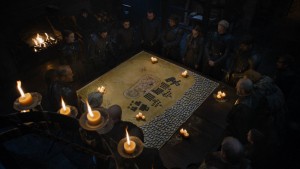 We don’t lose anybody in the GAME OF THRONES Season 8 episode “A Knight of the Seven Kingdoms,” but it plays as a fond farewell to a lot of characters we love. The question is, which ones will those be?

Jaime Lannister (Nicolaj Coster-Waldau), newly arrived at Winterfell, presents himself to the assembled nobles, including Queen Daenerys (Emilia Clarke), Warden of the North Jon Snow, aka Aegon Targaryen (Kit Harington), and Lady of Winterfell Sansa Stark (Sophie Turner). Jaime confirms everybody’s suspicions that his sister Cersei was lying when she said she’d send an army to fight the White Walkers. He also says that Cersei’s got her own army to fight any survivors of the coming clash. Jaime adds that he would not take back anything he’s done – he did it out of loyalty to his house and family. Now, though, the survival of humankind is at stake, and Jaime feels this is more important even than family ties.

Daenerys is royally irate. It doesn’t help that Jaime killed Daenerys’s father, even though the old king was by all accounts an insane monster. However, both Jaime’s brother Tyrion (Peter Dinklage) and Brienne of Tarth (Gwendoline Christine) plead Jaime’s case. Sansa trusts Brienne with her life, so that’s good enough for her, and Jon feels that they need all the men they can get. So Daenerys lets Jaime remain and have a sword. It’s clear Jon hasn’t shared the news of his real parentage with Daenerys. Daenerys is angry with Tyrion for him believing that Cersei could be trusted. She threatens to replace him as Hand of the Queen.

Brienne has been given command of an army unit. Jaime tells her he’d be honored to serve under her command.

Even though Ser Jorah (Iain Glen) was devastated when he was replaced as Hand of the Queen (to be fair, Daenerys thought he was dead at the time), he recommends to Her Majesty that she forgive Tyrion. Everybody makes mistakes; not everybody is that smart.

Bran Stark, aka the seer the Three-Eyed-Raven (Isaac Hempstead Wright), is also present at the assemblage, but he doesn’t mention that Jaime threw him out a window (because Bran saw brother and sister Jaime and Cersei having sex). Jaime seeks Bran out and apologizes. Bran is not angry at Jaime, or at anybody. Had Jaime not done what he did, Bran would not be the Three-Eyed Raven. Like Jon, Bran feels Jaime should fight against the Walkers. When Jaime asks what will happen to him after, Bran says, “Who says there will be an after?” Not exactly what you want to hear from someone who sees the future.

Daenerys tries to make peace with Sansa. Sansa acknowledges that she’s suspicious that Daenerys is manipulating Jon. Daenerys points out that she has spent her life trying to get the Iron Throne, but she’s put aside that quest to help Jon fight his battle at Winterfell, so who’s manipulating whom? Sansa takes this point, but says that after all that’s happened, the North has vowed never to bend the knee (accept outside rule) again, so where does that leave everybody if Daenerys wants to rule the Seven Kingdoms?

While the two women are still contemplating this question, they are interrupted by a delegation of men from the Iron Islands, led by Theon Greyjoy (Alfie Allen). If you’ll recall, Theon conquered Winterfell, forcing Bran and the late Rickon to flee. Then Theon was brought low by the horrendous, now-dead Ramsay Bolton. Theon rescued Sansa from Ramsay, then went back to the Iron Islands and had a lot of trouble with his relatives. Daenerys is happy to see Theon, and the normally contained Sansa is positively overjoyed, actually embracing Theon. (We get the feeling that he’s come to Winterfell because he loves her.) 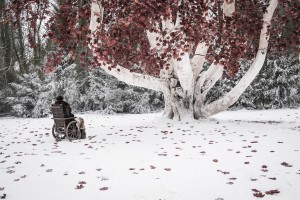 At a war council, Bran reveals the Night King will come for him. The Night King wants to end the World of Men, and as the Three-Eyed Raven, Bran is the world’s memory. Sam truly understands this. It’s decided that a trap will be set for the Night King, with Bran as bait in the Weir Wood, and Theon and the Iron Born guarding him up close. Daenerys and Jon will be nearby but not too nearby with the dragons. Can the Night King be killed by dragon fire? Nobody’s ever tried, so even Bran doesn’t know.

Arya (Maisie Williams) goes down to the foundry to see how Gendry (Joe Dempsie) is coming along with her special Valerian weapon. Gendry hasn’t gotten around to it yet. He doesn’t know what Arya’s been up to over the past few years (becoming an ace assassin, etc.). Arya impresses him with some knife throws and her knowing, fearless bearing, and Gendry decides he’ll speed up the weapon-making. Later on, he presents Arya with a nice long spear, tipped by Valerian steel. Arya thinks the weapon will do. She also would like to have sex before she dies, thank you very much, and selects Gendry as her first and possibly only lover.

Okay, Arya is old enough to make this decision, and Gendry is age-appropriate, but there’s still a moment of, wait, huh, isn’t Arya still a kid? Should we find this icky? Well, no, Williams is now twenty-two years old, and even if Arya’s a bit younger, she’s still an adult. Even so, it’s kind of a relief that unlike a lot of other GAME OF THRONES couplings, Arya and Gendry are shown in a way that would be acceptable on a broadcast network.

Love is actually bursting out all over Winterfell. Grey Worm (Jacob Anderson) promises Missendei (Nathalie Emmanuel) that when this is all over, he’ll take her back to her people and defend her and them.

Then there’s the brotherly love between Tyrion and Jaime. Tyrion was fooled into thinking that Cersei would send an army, because he believed her when she said she had been changed by her new pregnancy. Is this true? Jaime says Cersei is really pregnant (with his child), but she hasn’t changed.

And then there’s the unrequited passion of Tormund Giantsbane (Kristofer Hivju) for Brienne. She still doesn’t know what to make of flirtation from someone she doesn’t want (not that she’d likely know what to do with someone she did want), but he’s glad to see her anyway.

Sam (John Bradley) gives his Valyrian steel sword to Ser Jorah. Sam says that the sword is too big for him, though it’s probably because he can’t bear the reminder of his late father and brother. Jorah’s father, the late Jeor Mormont, was Sam’s maester at Castle Black, and Sam viewed the man as a father figure.

Jorah also tries to persuade his young cousin, Lady Lyanna Mormont (the fabulous Bella Ramsey) to take shelter in the Winterfell crypt with the children and non-fighters. Lady Lyanna is not having it.

There’s a moment on the wall of Winterfell with Jon, Sam (John Bradley) and Edd Tollett (Ben Crompton), the last survivors of Castle Black. Sam also insists that he’ll fight, even though he’s viewed as a klutz. Sam reminds Jon that he was the first to kill a White Walker. Edd views the fact that Sam, of all people, killed a White Walker and has a lover (Gilly, played by Hannah Murray), as proof that the world really is coming to an end. We finally see Jon’s direwolf Ghost. We have no idea where Ghost has been for a good while, but it’s good to see that the people making GAME OF THRONES remember that he exists and is supposed to be at Jon’s side.

Daenerys commands Tyrion to go to the crypt with the noncombatants. Tyrion protests, but Daenerys says she’ll need his counsel after the battle.

Tyrion winds up drinking by an indoor hearth fire with Jaime. They are shortly joined by Brienne and her squire Podrick (Daniel Portman), who has actually become a halfway-decent fighter since his early days of total hopelessness. Then Ser Davos (Liam Cunningham) comes in, and finally Tormund. After a little more drinking, and musing on the subject of whether anybody is going to possibly survive what’s coming, the talk turns to the fact that Brienne isn’t a “Ser.” Actually, one knight can create another knight. Everybody agrees that Brienne ought to be a knight (although Brienne protests that women aren’t made knights, nobody cares about tradition) and so Jaime gets Brienne to kneel and anoints her a Knight of the Seven Kingdoms. Brienne is as happy as we’ve ever seen anyone on GAME OF THRONES, and her friends are happy for her. It’s a moment of great affection and earned, solemn high spirits.

Jon is down in the crypt, at the statue of Lyanna Stark. When Daenerys comes to join him, she muses that her brother Rhaegar had seemed to be such a good man, and yet he’d raped Lyanna. Then Jon tells her no, Rhaegar married Lyanna in secret, and they had a son and … that’s Jon. Daenerys at first doesn’t want to believe it – such a huge secret, and the only people who knew it are Jon’s brother (well, okay, cousin) Bran and his best friend Sam? Jon protests that he doesn’t want it to be true, but he knows it is. Daenerys voices what she knows – this would make Jon, and not her, the immediate heir to the Iron Throne. And before Jon can react, the warning horn blows. The dead can be seen advancing on Winterfell.

“A Knight of the Seven Kingdoms” plays as a kind of emotional victory lap, reminding us of why this show has endured so well. Yes, it’s got more spectacle than any other narrative series, now or maybe ever. However, what really sells it are the people, and we see pretty much all of the ones we care about here. It may seem strange to devote a whole episode of GAME OF THRONES, so known for its action, to scenes of dialogue, reminiscence and nuance, but with all of the epic visuals, this seems fitting. It’s great to see Brienne finally get the honor she deserves. Whether or not Daenerys turns dark with the knowledge, it’s also good to have the last of the big secrets (that we know of) out in the open, because clearly, all Hell is about to break loose.