Game of Thrones Review Season 7 Beyond the Wall recap

TV Review: GAME OF THRONES – Season 7 – “Beyond the Wall” 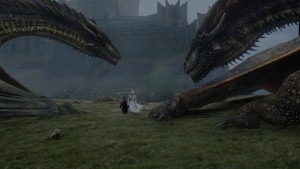 By the time you are done watching the GAME OF THRONES Season 7 episode “Beyond the Wall,” you may feel that you are freezing your faces off right along with most of the characters. Apart from a couple of scenes in Dragonstone, we are squarely in the North, at Winterfell, Eastwatch and mostly, as the title says, beyond the wall. And wow, things are dire there.

At Winterfell, Arya (Maisie Williams) confronts older sister Sansa (Sophie Turner) about the letter Sansa penned under duress, urging brother Robb to bend the knee to then-king Joffrey. Sansa tries to explain herself, but doesn’t manage to utter the words, “They told me that if I wrote the letter, they wouldn’t kill Father.” Even that might not impress Arya, although the younger Stark sister waxes philosophical that, as girls, neither she nor Sansa got to choose their destinies.

When Sansa asks him about it, Baelish (Aiden Gillen) says he has no idea how or where Arya got the letter. He encourages Sansa to ask Brienne (Gwendoline Christie) to intercede with Arya, since Brienne is sworn to protect both of them. Instead, when Sansa gets a letter demanding her presence at King’s Landing, she tells Brienne to go in her stead. Brienne, after all, has a respectful relationship with Jaime Lannister, where as Sansa has no intention of ever getting anywhere near Cersei again. Brienne is reluctant, but obeys the command.

Then Sansa finds Arya’s bag of faces – the ones Arya uses as a “Faceless Man.” Sansa doesn’t seem quite able to come to grips with the idea that, yes, these are skinned-off faces of dead people. Arya tries to explain it to Sansa, but Sansa hasn’t heard of the Faceless Men. Still, she seems to get the general idea. Sansa asks Arya what she’s going to do with the letter. Arya threatens to show it to the lords of the North. (The notion that Arya might show the letter to little, ferocious Lady Lyanna Mormont is particularly appalling to Sansa.) Arya even seems to threaten to cut Sansa’s face off, but then gives Sansa her knife. So … that’s some extreme family tension, even by GAME OF THRONES standards.

Tormund is happy to be back in the North – Winterfell was too far south for him – while poor southerner Gendry is freezing. He’s also still made at Beric and Thoros for the time they sold him to Melisandre and she almost sacrificed him. Thoros points out that Gendry is still alive and Clegane tells Gendry to stop whinging. The kid’s getting it from all sides.

Tormund and Jon talk, with Tormund saying that he thought former Wildling leader, the late Mance, should have bent the knee. This is a bit of a reprimand to Jon for not bending the knee to Daenerys (Emilia Clarke), who has said she won’t come north to help unless he does. Tormund also confides to Clegane that he’s in love. When Tormund describes the object of his affection, Clegane incredulously realizes that it’s Brienne of Tarth, who bested him in battle and left him for dead. Clegane thinks Tormund is completely insane and unlikely to get anywhere with her (we’re inclined to agree on the second point, since Brienne reacts with mild horror every time Tormund has made eyes at her).

Jon, who has been resurrected once, and Beric, who has been resurrected six times, compare notes on coming back from the dead. Beric says he doesn’t know what the Red God wants, but clearly he must want them to do something, since he’s brought them both back to life. Jon also talks to Jorah. Jon has Longclaw, the sword that Jorah’s father Jeor Mormont gave to Jon when Jeor was Lord Commander at Castle Black. Jorah is appalled that his father was murdered by members of the Night’s Watch, since Jeor loved his men. Jon is still pretty disturbed by the incident himself. Jon wants Jorah to have Jeor’s sword, since Jorah was Jeor’s son. Jorah insists that Jon keep it. Jorah wins that argument.

And then, because they’re beyond the Wall, they get attacked by a gigantic undead bear, a White Growler, if you will. Thoros saves Clegane, but gets badly wounded. And then a bunch of the undead show up. Since the point of this mission is to capture one of the wights in order to show Cersei and convince her of the threat, they grab one. Jon stabs the main White Walker with his Valyrian steel sword. Valyrian steel kills Walkers, but all of the other undead collapse and disintegrate. Our guys theorize that maybe killing a Walker kills everyone he “turned.” We haven’t seen this happen before, but it works in other mythologies, so there’s no reason for GAME OF THRONES to be left out.

Jon sends Gendry, the fastest runner among them, to head for Eastwatch and send a raven to Daenerys, begging for help. Gendry takes off running, but the cold and the distance get to him, and he collapses right before he reaches the gate. Fortunately, the gate opens and the Wildlings bring him inside.

At Dragonstone, Tyrion (Peter Dinklage) is still upset that Daenerys had Drogon burn two enemy soldiers alive. He also points out that Jon Snow seems to have a more than comradely interest in Daenerys. And then Tyrion asks Daenerys who will succeed her if she dies, since she is unable to bear children. Daenerys says she’ll worry about that once she actually has the crown. By the time the raven shows up, she is extremely annoyed with Tyrion. Once she reads the letter, she decides the only thing to do is bring all three dragons and fly to Jon’s aid.

This is a great episode, but that raven must be the world’s fastest bird, because it gets to Daenerys and she gets north of the Wall by the next morning. This complaint is getting a bit ahead of the action, but even so, it deserves comment. We can believe that the dragons can cover great distances in a short amount of time once they’re aloft – they as big as small airplanes, with wingspans to match – but a raven? Yeah, with dragons and zombies and magic swords all being acceptable, a fast bird shouldn’t break the credibility barrier, but it’s one of those plot conveniences that feels like it’s a feather too far.

North of the Wall, Jon and company are chased by White Walkers onto a rock in the middle of a frozen lake. The Night King arrives. At first, the group seems doomed. Then the Walkers start to fall through the ice, so our people seem safe for a little while. Thoros dies and the others cremate him on the rock so he won’t come back. With Thoros dead, there’s no one to resurrect Beric should he die again, but he says he’s ready for that.

The lake freezes over, the dead start closing in, things look hopeless. And then Daenerys on Drogon, with Viserion and Rhaegal in tow, comes flying over the horizon. The dragons blast the dead with fire, there are a lot of casualties among the wights and a certain amount of relief among Jon and Company.

Then the Night King grabs a spear and throws it at Viserion. Viserion falls onto the ice, dying. Daenerys – and the other two dragons – are grief-stricken, but they can’t save him. Jon falls into the icy water, urging Daenerys to take the others and go. Daenerys cannot reach Jon without getting everybody killed (herself and Drogon included), so Clegane, Tormund and Beric mount up behind her and they fly away, narrowly missing the next spear the Night King hurls upward.

Jon’s sort-of-but-not-entirely undead Uncle Benjen (Joseph Mawle) rides up to save Jon. Benjen gets Jon on his horse, which rides off as Benjen is overwhelmed by the wights.

Jon is in terrible shape. When he finally wakes up, he’s on a ship, with Daenerys standing watch over him in the cabin. He feels terrible for getting her dragon killed, especially since she reiterates that the dragons are her children. She, however, says she had to see the undead to truly understand the threat. She also sees the scars on Jon’s torso and realizes he really did take a knife to the heart. Jon says he’s ready to bend the knee and Daenerys swears loyalty to Jon and they are holding hands for a lot of this. We know Daenerys is Jon’s aunt, but is that seriously going to bother either of them?

Back beyond the Wall, the wights huge giant chains (there are a bunch of Internet memes about this that are pretty funny, you can find them if you look) to pull the dead dragon out of the water. The Night King does something magical and Viserion opens undead blue eyes. Oh, great, now both sides have dragons.

Fast ravens notwithstanding, this episode moves very fast and has more moments of dread, suspense and intensity that most twenty-two-episode seasons of other series. “Beyond the Wall” completely validates the passion of fans of GAME OF THRONES.