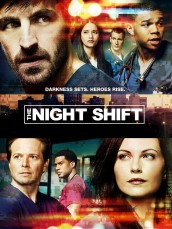 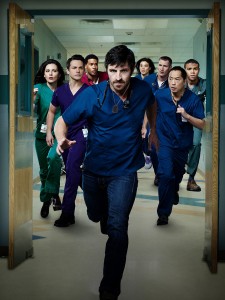 In its fourth year, NBC’s Thursday-night medical drama THE NIGHT SHIFT takes a closer look at U.S. military veterans. A number of the regular characters are veterans, as are some of the actors in real-life, including new cast member Josh Kelly.

Technical advisor Toby Montoya is a U.S. Army veteran who served in Iraq and Afghanistan, but he started his work on THE NIGHT SHIFT as an extra. His background was discovered when series co-creator/executive producer Gabe Sachs had an on-set conversation with Montoya on set. Sachs’ fellow co-creator/executive producer Jeff Judah explains during a Q&A panel for the Television Critics Association 2017 summer press tour, “We realized in [Montoya’s] background, he had so much military knowledge coming from his expertise that he has risen up, and now he is in charge of all the military [aspects of] the show.”

“Military advisor,” Sachs adds. “Anything we do that involves that, including any of the prop stuff. He arranges flashbacks. A lot of the sequences are designed by Toby.”

As to what’s new this year, Judah relates, “One of the things we’re doing is, every year, we keep increasing. And you’ll see in this season, we sort of merged with the VA [Veterans Administration], so they can tell us some more of these stories. The idea is, I think in every episode, there’s always somebody with military service, and that’s one of the reasons we chose San Antonio, because of all of the military bases around there. So it was natural that a good percentage of your workforce, or even the actual people who aren’t working at the hospital but just work and live in the area, stay there and settled there. So that’s how we get a lot of the military stories … It’s not just the soldiers. It’s also the families. The families also served. They’re also giving something when the men or women of their family go overseas. The people that stay behind are giving something. So you’ll always see that. And in further seasons, we will even be going more to the VA, telling not just our [regular] characters’ stories, but also some of the patients who have come, and see some of their flashbacks and their back stories of how they got to be in the military, and what that’s meant to them since they’ve been back.”

Away from the panel, Judah and Sachs discuss THE NIGHT SHIFT at greater length.

ASSIGNMENT X: What is the most complicated thing you’ve had to do on THE NIGHT SHIFT?

JEFF JUDAH: One of the more complicated things, honestly, is producing it in eight days for a certain budget number, because it’s so ambitious. You’re going out in the helicopter, and doing all these rescues, and shooting all of that at night. A lot of that is trying to bring the military medicine aspect to the show. It’s really the most complicated to get the medicine right, but also to make it produceable and make it doable, when someone’s taken from a bridge, or someone’s underwater, or someone’s in a fire, recreating fairly dangerous situations while keeping all the crew and the cast safe.

AX: Is there one sequence so far that stands out as the most complicated or the most dangerous?

GABE SACHS: There are a lot of complicated things that we do on the show, and I think that there’s a few that I remember, just being on set, is definitely the freeway accident, when someone is dangling, their neck is cut open –

JUDAH: They’re actors [as opposed to genuinely injured people, laughs]. They’re dangling over a freeway sign. The riot was difficult, because you have two hundred and fifty extras, you say, “Riot, but don’t hurt someone.”

SACHS: But you’re actually charging each other. Everyone was fine, but you do have those moments when there’s fire going on, there’s real stuff going on. You’re nervous, but thankfully, we have an unbelievable team, so we feel better.

AX: When you have two hundred and fifty extras on set, do you have additional assistant directors?

JUDAH: You have to have everything. It’s safety first, safety second, and safety third. And then you’re still trying to get it done, but people get into it. That was the race riot episode, and it just turned out great, and a lot of it was the work of the actors. They went in, and they were fighting the cops, and a lot of that is [stunt coordinator] Al Goto and his stunt team doing a lot of the fighting and a lot of the stunt scenes.

AX: As far as the most medically complicated things you’ve done, do you go out and seek stories from the news?

JUDAH: We have two doctors and a trauma nurse full-time in the [writers’] room. So they’ll come up with ideas, or we will say, “Hey, we have an idea, what if someone had to fall asleep on a train, what would happen to them?” or “We need something to be an illness that takes forever.” They come up with a lot of the medical stuff for us.

AX: Do you have somebody on staff looking for weird medical stuff?

JUDAH: A little bit. We all kind of naturally do it.

SACHS: Actually, at this point, they are naturally coming up with it.

JUDAH: I think we have so many weird things that we can’t get to.

SACHS: Right. We have dozens of weird things.

JUDAH: Because when you have actual working E.R. doctors on your staff, they come in every day with new stories.

AX: And what would you most like people to know about Season 4 of THE NIGHT SHIFT?

JUDAH: It’s nonstop. It’s what we always do. We try to not waste your hour. We try to make it where you laugh, and you feel emotion, and you get excited. We like to have nonstop adrenaline mixed in with comedy and emotions.

SACHS: Exactly. It’s really about the continuous adventure, and every week, we want people to be adrenalized as soon as they watch the show. It’s going to be nonstop action.