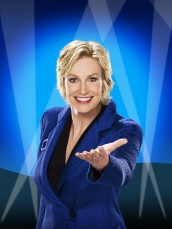 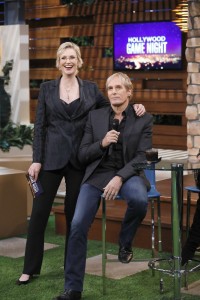 HOLLYWOOD GAME NIGHT, now on Tuesday nights in its fifth season on NBC, is the brainchild of executive producers Sean Hayes and Todd Milliner. Contestants pick celebrity guests from that episode’s panel to play a variety of games for them, based on party activities.

Jane Lynch, who has won two Emmys as HOLLYWOOD GAME NIGHT’s host, is with two of the show’s other executive producers, Dwight D. Smith and show runner Michael Agbabian, at an NBC press event to discuss their series.

ASSIGNMENT X: Do any of you bring your favorite games from life into the show, or is it all from Sean Hayes and Todd Milliner?

DWIGHT D. SMITH: Oh, we create a lot of games. All the games are original, and we have a great team that’s been with us for many seasons that actually create the games, they prototype the games. Some games are inspired by games that are out there, like board games and such, but we take our own spin on it, whatever it mi

ght be – make it bigger, a little more fun and a little more group play, because there are a lot of war games that are very singular, so we try to make it more team-oriented.

MICHAEL AGBABIAN: I think at this point, we’ve figured out we’ve created over seventy games on the series so far. So a lot of games in every season, we try to introduce at least ten new or so.

AX: Have you ever had any games that haven’t worked in an episode?

AGBABIAN: Well, we never let it get to the episode. By the time they get to the episode, they have prototypes tested and we’re confident that they’re going to work. But during the prototyping, tons, because we have a process where there are all sorts of games that are tried and thrown out, and we have several that we always say, “We’re going to send it back the lab” that have taken us several seasons before we actually cracked them to get them on the show. I think Clue Boom was one that took several seasons. Casting Couch, which is another one, similar to Musical Chairs, but with celebrity faces on pillows, both of those have taken us several seasons to crack before we were able to make their debut on the show.

AX: Does HOLLYWOOD GAME NIGHT have an app that goes with it with the games you have on the show?

AX: Do you have a particular set of guests who are extremely good at the games, who you just like to invite over and over?

AGBABIAN: She’s been on I think five times now?

LYNCH: Yeah, and she wins every time.

AGBABIAN: She’s a five-timer, and she wins every time. She got very competitive with Anthony Anderson.

LYNCH: I was looking to go back to CRIMINAL MINDS, yes. And I offered myself up to them, and they wrote me in this season, so that was really wonderful of them.

AX: You’re also currently playing Janet Reno in MANHUNT: UNABOMBER. Do you have a preference, like drama, comedy …?

LYNCH: No, I love it all. Game show-hosting, all of it.