The EP chats about the not-quite superhero series 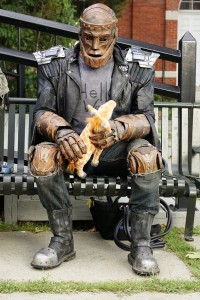 DC’s new DOOM PATROL, now streaming exclusively on DC Universe online, with new episodes dropping Friday nights, concerns a group of other-than-human not-quite-superheroes. Brought together by scientist Niles Caulder, aka the Chief (Timothy Dalton), the Doom Patrol consists of: Cliff Steele/Robotman (Brendan Fraser as his voice and in flashbacks, Riley Shanahan in the steel suit), who is a human brain inside a very large metal body; Kay Challis/Crazy Jane (Diane Guerrero), who has sixty-four separate personalities; Rita Farr/Elasti-Girl (April Bowlby), a ‘50s movie actress who tends to turn into a blob when agitated; Larry Trainor/Negative Man (Matt Bomer as his voice and when he’s recognizable, Matthew Zuk in his bandaged form), a former test pilot who had an interaction with negative energy; Victor Stone/Cyborg (Joivan Wade), the half-man, half-machine being who rallies the Doom Patrol into action.

At this point, DOOM PATROL executive producers Greg Berlanti and Sarah Schechter probably deserve status as DC superheroes themselves, as they and Berlanti Television (Schechter is president of the company) are the power behind the mighty alliance of DC and The CW network, which currently has on air ARROW, THE FLASH, SUPERGIRL, LEGENDS OF TOMORROW, and BLACK LIGHTNING. Additionally, Schechter and Berlanti also currently produce DC Universe’s TITANS, non-DC series RIVERDALE (also on The CW), CHILLING ADVENTURES OF SABRINA (on Netflix), and non-comic book series BLINDSPOT, GOD FRIENDED ME, YOU, and CBS’s forthcoming drama THE RED LINE.

In this exclusive interview, Schechter talks the ins and outs of making DOOM PATROL and more.

ASSIGNMENT X: You produce DOOM PATROL and TITANS, which are the flagship series of the new DC Universe streaming service. Is there particular pressure on you and Greg Berlanti in launching a new DC online network?

SARAH SCHECHTER: No. We’re lucky to be a part of it, and we’re grateful to our friends at Warner Brothers and DC to include us in it, but I feel the same pressure to launch any show on any network, of just making sure we do something that’s good.

AX: So there’s nothing really different about launching DOOM PATROL and TITANS than launching a show on The CW?

SCHECHTER: No. We just try and do the best possible version of the show. I think there were additional pressures on DOOM PATROL because of the complexity of production, of the voices, and the live-action characters, and there’s a lot of CGI, and having enough time for post, and stuff like that. But we don’t think about network when we make shows. I mean, we think about the restraints of what network it is, and who the audience is, but ultimately, we just try and do the very best version of the show.

AX: Are you always looking at, “How can we expand the DC-verse?” Or is DC coming to you and saying, “Hey, we’d like to expand, and you’re the guys for it”?

SCHECHTER: Yeah. It ends up being more the latter, but we’re always talking to them. We love all those guys – obviously, we love doing it, and we’ve done it a bunch, so now we know things, and we all know how to make these shows together, but I think our appetites and our passions extend beyond DC, and we do that, and we’re happy that we have a mix of DC and non-DC shows. But we love working with them, and these are iconic characters. It’s so much fun to be a part of.

AX: Well, you have the drama THE RED LINE coming up on CBS, which is fairly un-DC …

SCHECHTER: Yeah. We have RED LINE, we have GOD FRIENDED ME, we have RIVERDALE, we have CHILLING ADVENTURES OF SABRINA, we have YOU, we have BLINDSPOT. So we have a real mix.

AX: With DOOM PATROL, was there a thought of, “We’d like to do something that’s not as dark as SUICIDE SQUAD, but darker and weirder than the CW-verse”?

SCHECHTER: Yeah. I think the [DOOM PATROL] comic book is darker and weirder than FLASH, which is pretty hopeful, or SUPERGIRL, which is pretty hopeful. And so it makes sense to stay true to what the comic book is. It’s inventive and irreverent and strange. So that made it really fun to do, and to find, and for [developer/show runner] Jeremy [Carver] to run with it and create his own version of it. He’s not a “comic book guy,” I would put quotes around that, but he’s really drawn to these misfits. And I think you can see that in the show.

AX: Were you a fan of Jeremy Carver’s work on the American version of BEING HUMAN?

SCHECHTER: Yeah. I was a fan of Jeremy’s in general, and everyone at Warners just adores him. He has a wonderful reputation. But reading this script, you realize just how wildly talented he is, because his attitude is in every page of it. 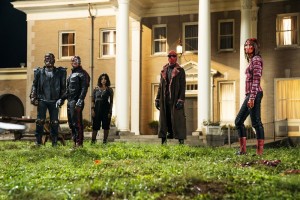 AX: Is the way you work on all of these shows is to make sure they’re up and running, and then after that, they just call you if there’s an emergency, or …?

SCHECHTER: No. I watch every cut of every episode of SUPERGIRL. It depends on the show. Greg works on all of them, I work on all of them as it’s necessary. Our company works on every episode, we’re part of casting every character on every show. But part of our job as producers is supporting the show runners and their vision and helping them to achieve it. The most work is getting them up and running and casting your main characters and all that, but the work continues.

AX: Once a show is up and running, is there a typical sort of thing that really requires your attention? I there a common factor of, “Okay, we need you to come and look at …”?

SCHECHTER: No. Greg is a part of breaking every season of every show. He’s really in there every single day, working on all of these shows. And then for me it’s like, one, when there’s a problem, I’m needed more, if there’s a production issue, if there’s a budget issue. But I think casting is the key to all of these shows. So when we make good casting decisions, I think it makes all the difference. So we’re part of that.

AX: Was there anything unique to getting DOOM PATROL up and running?

SCHECHTER: Yeah, the visual effects I think were a big part of it, how April’s character transforms and quote-unquote blobs out. I think casting this was a challenge. It’s helping [some of the actors] to understand, “No, no, you don’t have to be there every day, you’re doing voices and then you come and do some episodes.” Jeremy’s script was so good, and that was the best kind of advertisement we could have for finding this incredible group of characters. But yeah, very involved in all of that.

AX: Do you have a favorite character in DOOM PATROL?

SCHECHTER: Oh, my God, it’s so hard. I feel like Brendan brought so much pathos and humanity to Cliff, and I really love that. I mean, I love what April does. When April was talking [at an earlier Q&A panel for DOOM PATROL] about who her references were, it was so perfect, SUNSET BOULEVARD and all of that, and I love old Hollywood. But then Crazy Jane. In an ensemble, you just have different characters you love in different scenes, truthfully.

AX: Over the course of Season 1, will we meet all of Crazy Jane’s alter-ego personas, or are you holding some for Season 2?

SCHECHTER: I don’t know. It’s a good question for Jeremy. I wonder if he has a board somewhere in the writers’ room, where he’s marking them off. But we get through a lot.

AX: Do all of her alters remember who everybody else is, or do they have to keep introducing themselves to whoever is in charge of her body at the time?

SCHECHTER: Again, Jeremy could speak to this better, but there’s almost this Underground Railroad, like a subway, and so there are different stops. Some of them are aware of others, and it’s very complicated [laughs].

AX: You shoot The CW’s DC series in Vancouver, but DOOM PATROL is being made in Atlanta. Why the change in venue?

SCHECHTER: First of all, there are so many shows in Vancouver, it’s hard to find crew at this point. Also, Atlanta was sort of perfect for – the pilot alone, we’re in 1930s Africa, we’re in 1980s Daytona Beach, we’re in a 1950s Air Force base. To find all those locations, Atlanta was the perfect place to shoot it. In one day, we would go from this crazy ‘80s mansion that Cliff would live in, to a swamp where a crew is shooting in Africa. And you buy all of it. I think there’s a real diversity of locations in Atlanta that fit this show perfectly.

AX: Was finding the exact tone of DOOM PATROL a big part of getting the show up and running?

SCHECHTER: DOOM PATROL’s tone is nearly indescribable, but if you read the pilot script, it is so clear. It wasn’t difficult at all, I think, because of the work that Jeremy put on the page. And Glen Winter did such a beautiful job with [directing] the pilot, he immediately understood all of the different tones. It was really on the page.

AX: Does DOOM PATROL allow you to tell stories you can’t tell on your other shows?

SCHECHTER: Yes, absolutely. No other show would have a cockroach as a main character, and a cross-dressing street as a main character. That’s the great fun of the show, is how wild it is, and how strange. Mr. Nobody [played by Alan Tudyk], you have a two-dimensional guy, who’s the narrator. Yeah, you can’t do this anywhere else. That’s what’s really fun about DOOM PATROL.

AX: Is the cockroach character going to be motion capture?

SCHECHTER: No, definitely not. Television barely has time for motion capture. That’s a luxury for film.

AX: Is there motion capture involved with Robotman?

SCHECHTER: No. There’s an actor, Riley Shanahan, playing the robot in the robot suit. He’s a very talented actor in his own right, a working actor, and he voices the character on set for the other actors, and then Brendan ends up putting his voice in. But it’s not motion capture. I think they studied each other, and they talked about how the character moved, and they made decisions together. They’ve done some motion capture with Alan now, where you see his face in all these pieces. So that was motion capture.

AX: And what would you most like people to know right now about DOOM PATROL?

SCHECHTER: I’m so excited for people to see DOOM PATROL. What’s great is, it’s a show that’s very strange, because I don’t think there are many shows that you could describe this way, but it’s a show that really works for hardcore comic book fans, and it will work for people that don’t read comic books at all. I think it’s so inventive. People who watch a lot of television – I watch a lot of television – it’s rare when you watch a show, and you’re like, “I have no idea where this is going, but I love these characters, so I’m down for the ride.” And I think that’s the case with this show.