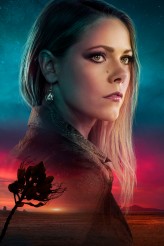 The actress talks playing an alien on The CW series 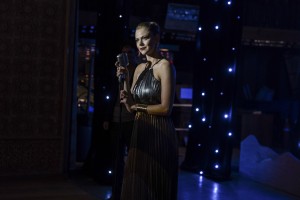 In The CW’s ROSWELL NEW MEXICO, now in its first season on Tuesday nights, a trio of alien siblings struggle with passing as human in the town of the famed crash site. Carina Adly Mackenzie adapted Melinda Metz’s ROSWELL HIGH novels for this new series, but unlike the previous TV adaptation (ROSWELL), the main characters here are all adults.

Lily Cowles plays Isobel Evans-Bracken, who in the most recent episode to air finally revealed her extraterrestrial origins to her husband Noah (Karan Oberoi). After freaking out a bit – he’s already seen Isobel recuperating within an alien pod – Noah decided that love should triumph over fear, and the marriage remains strong.

But Isobel has other problems. She’s worried about her sheriff’s deputy brother Max (Nathan Dean Parsons) and his romance with local Liz Ortecho (Jeanine Mason). She’s worried about her other brother, Michael (Michael Vlamis), who’s trying to build a spaceship so that he can go home, even though none of them know where home is. Finally, they’re all worried about what seems to be a fourth unknown alien who has caused Isobel to have blackouts and has usurped her body to commit murder.

At a press event held by The CW for ROSWELL NEW MEXICO, Cowles has accessorized for the occasion. Her earrings look like small constellations. “They have a little bit of a cluster thing,” Cowles explains. “I was thinking maybe this is like a little pod, a little amphibious egg kind of situation. I actually got myself it for Christmas. I said, ‘Happy Christmas, Lil, you deserve this earring.’ So now I’m wearing it.”

ASSIGNMENT X: Prior to doing ROSWELL NEW MEXICO, had you ever thought about playing, or wanted to play, an alien?

LILY COWLES: It’s funny that you ask. I was actually on a television show called BRAINDEAD, where I did play an alien. Really, I gave birth to an alien, and then I think I turned into one myself. So actually, I’m starting to wonder if I’m being typecast as aliens. And honestly, I’m very down with that. If I could make a career out of playing aliens, I would be very satisfied.

AX: It seems like the genre is now so extensive that perhaps you could do that …

COWLES: I think I could. Here’s hoping.

AX: Had you watched the earlier ROSWELL at all?

COWLES: Absolutely. I was a big fan of the original ROSWELL, and I was so excited when I found out they were remaking it, just because I was excited to see it again. Then when I got the opportunity to go up for the role of Isobel, it was like, “Oh, my gosh.” I couldn’t believe it, I was so excited. The writing was great, Carina’s done an incredible job, being directed by [executive producer] Julie Plec was amazing. The entire experience has been a dream come true. I love science fiction, so this is my jam.

AX: Each of the siblings has a different kind of alien power. Is Isobel’s super-power telepathy?

AX: Have any of the actors playing people who Isobel has influenced studied how you play her to see if they’re going to act a little more like Isobel when they’re under her control?

COWLES: I think when she gets in their heads, it’s not so much that they begin to act like her. They act like themselves. But there was some opportunity, if you watch this season, to see characters taking on each other’s behavioral patterns. So there was a little bit between the actors, where we would get together and talk about, “Okay, now, what does this look like? How will this play out?” And that was really fun.

AX: And speaking of getting together with the other actors, did you get together Nathan Dean Parsons and Michael Vlamis, who play Isobel’s brothers, and get to know each other to play the family vibe?

COWLES: We all got very close in Albuquerque, when we were shooting the pilot. I got close to the entire cast. But yes, Nathan and Michael Vlamis, we all got really close during the pilot as well. We would go out, and we would go play pool together, and sit together, and talk. You have to build that intimacy, and I think we did a great job of that on the pilot. Even more strange, you might say, is [Karan Oberoi as] my husband Noah, who I met the day that we had to shoot a romantic scene together. It’s always a funny thing. You meet the person, you’re like, “Hello, nice to meet you, okay, lie down on the bed, and I’m going to crawl on top of you.” But Karan was phenomenal, and we actually wound up taking a Muay Thai kickboxing class together early on in the season, and we got really sweaty, and kind of threw each other around, and I think after that, we were very comfortable being physically intimate together [onscreen], so that was cool. 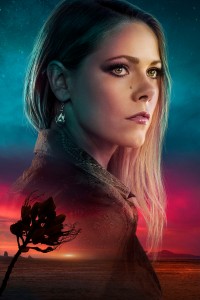 AX: Do you play anything about Isobel differently than you would were she a normal human person, who just had privacy concerns and family issues?

COWLES: Yeah, of course. I think there’s a real struggle with Isobel, because she knows that she’s not human, and yet she doesn’t really know what she is. It’s more like she knows what she is not, and that’s a really difficult place to live psychologically, to constantly be playing at something, and pretending to be something. But she doesn’t even really know what it means to be alien, so her true identity is something that she can’t even really relate to, and doesn’t really know what it is. So definitely, I think this is different than playing a human being who knows that they’re human, and maybe they’re secretive and controlled, but for her, there’s a whole psychological posture that I think is influenced by the fact that she doesn’t even know what her true self, what it really even means to be.

AX: Where does Isobel stand on what her brothers want? Max is like, “I’m okay here, I love this woman, I’m happy being a sheriff,” and Michael wants to find out who he is, and maybe get back home, wherever home is. Where is Isobel on that scale?

COWLES: Isobel’s main concern is keeping the family unit together. So I describe her as being like the Wendy to the Lost Boys. Or like the cream in an Oreo cookie, trying to hold the two cookies together. She’s like, “You guys, come on, we’re a family, we’ve got to stick together, we’ve got to be together.” She does not want Max to go off and fall in love with someone else and leave the family unit and tell their secret, and give them away, and trouble everything up. Nor does she want Michael Guerin to go flying off into space on a rocket ship. If she had her way, she could have her two brothers next to her all the time, and her husband there, and she would live a quiet, peaceful life, with everything normal and controlled. That’s what she thinks she wants, right?

AX: What do you think she really wants?

COWLES: I think what she really wants is to be able to let loose, and have fun, and be who she really is, and find out. I think she’s fiercely intelligent, and I think there’s only so long that she can hold on to this guise of pretending to be a human.

COWLES: I write some of my own material, so I’m in the process of writing a little short film that I’m excited about. But as of now, I’m hoping that Season 2 will come around.

AX: And what would you most like people to know about Season 1 of ROSWELL NEW MEXICO?

COWLES: It has everything you could desire. It’s got the romance, it’s got the mystery, it’s got intrigue, it’s got aliens. It’s got heart, more than anything. The chemistry of the cast is so strong that I think people will watch and just smile along with us. We had so much fun making it, and I hope people have so much fun watching it.