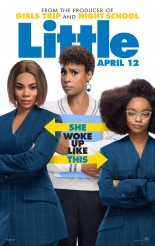 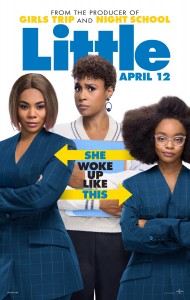 LITTLE is essentially the inverse of the 1988 comedy BIG. That may sound like an easy line, but it’s true. In BIG, a twelve-year-old boy wishes to be an adult and turns into a thirty-year-old (played by Tom Hanks). This is also the plot of 13 GOING ON 30, with Jennifer Garner as the suddenly-grown version of a 13-year-old who wishes she were older.

LITTLE flips this script by having successful thirty-eight-year-old businesswoman Jordan Sanders (Regina Hall) be so generally awful that an irate child wishes that Jordan were “little.” The next morning, Jordan wakes up to find she’s back in the body of her thirteen-year-old self, played by Marsai Martin. Jordan’s flummoxed personal assistant April (Issa Rae) soon learns about this improbable development. To keep the authorities at bay, Jordan must enroll as a student, with April posing as her aunt, at the very school where she suffered a traumatic, life-changing embarrassment when she really was thirteen. Meanwhile, Jordan’s company is facing a crisis that only a revolutionary new app can solve. April has thought of an app, but will she find the courage to pitch it?

As we might expect, the initially resistant Jordan learns some big lessons while she’s “little,” and manages to improve the lives of some schoolmates. April finds her voice, there are some good jokes, and then some squicky ones where young Jordan, forgetting what she appears to be, flirts with some grown men. (To the film’s credit, the men react with horror, but it’s still more icky than amusing.)

The script by Tracy Oliver and director Tina Gordon, from Oliver’s story, also somewhat dilutes its “be yourself” message by slathering everything with Jordan’s money. It’s easy to impress the cool kids when you have a tycoon funding (and advising you on) your wardrobe.

Two things make LITTLE stand out. One is director Gordon’s surprising use of bright colors in surprising places, whether it’s a turquoise blue bicycle or a rainbow of cabling wires or young Jordan’s hot pink suit. It’s charming and gives LITTLE an appropriate fairytale gloss.

The other, more important asset is Martin, who until now has probably been best known as the younger daughter on TV’s BLACK-ISH. Tracie Ellis Ross, who plays Martin’s character’s mom on the series, provides the voice of Jordan’s automated home device. Martin’s wise eyes, knowing swagger and perfect timing convince us that, yes, we are looking at a grown woman who has somehow been zapped back to her middle school form. As scripted, for a long time, teen Jordan has the extreme self-centeredness of the adult edition, but Martin imbues her with a sense of mischief that makes what should be a hateful character likable. It’s a performance that elevates everything in its orbit.

Rae is also a good deal of fine, and likewise shows sharp comic chops, as the smart if downtrodden April. Hall handles Jordan’s initial imperious persona with commitment. Rachel Dratch has a standout scene as the government representative making a home inspection. Tone Bell and Luke James are both appealing as aspiring boyfriends, and JD McCrary shows off great pipes as a shy middle school student.

LITTLE may not teach anybody life lessons they don’t already know, but it’s often gently amusing. More, it demonstrates that Martin is a performer to watch.