The creator/EP talks his inspirations for the legal drama 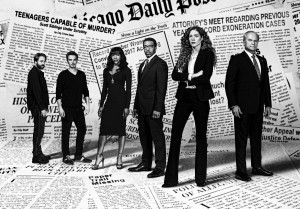 In Fox’s new Friday-night drama PROVEN INNOCENT, lawyer Madeline Scott (Rachelle Lefevre) has a very personal stake in exonerating wrongfully convicted clients. Madeline was sent to prison for ten years for a crime she did not commit, the murder of her best friend. Now Madeline is trying to find the real guilty party while she works a group of Chicago legal team, whose work is based on the real-life Innocence Project.

PROVEN INNOCENT creator/executive producer David Elliot attended law school in real life. He subsequently has written and/or produced for films and TV, including KNIGHTFALL and FOUR BROTHERS. He also wrote and directed the features CATACOMBS and NOTHING SACRED. In this interview, which is a combination of comments Elliot made at a Q&A session and a one-on-one follow-up discussion, he talks about why he wanted to make PROVEN INNOCENT, and more.

ASSIGNMENT X: Was any part of the premise for PROVEN INNOCENT, “What if Amanda Knox became a lawyer?”

DAVID ELLIOT: Well, I have to give credit where credit is due. That aspect of the character was, after I pitched the show to [fellow executive producers] Danny [Strong] and Stacy [Greenberg], we were trying to shape it into the actual version that we were going to present on screen. And these stories [of exoneration] are so compelling, Danny’s inspiration was to try to find a way that the protagonist herself had experienced this, because it wouldn’t just be working to save someone else’s life, but in a way, she’s remembering and using her own victimization to actually help other people. And it resonated with me immediately, because one of the most inspiring aspects of these stories is, very often, once someone is exonerated, they do work in the innocence movement. Some go on to become lawyers, like Jeffrey Deskovic, but many of them end up working with either the Innocence organization that got them out, or another group, to help either other innocent people that are still in jail, or with life transitions for people who are recent exonerees. So to me, it made tons of sense that it would be the type of experience that you would dedicate your life to.

AX: There are all kinds of legal dramas. How did you decide on the subject of something resembling the Innocence Project?

ELLIOT: Innocence is just a fascinating prism to view those issues through, because whether or not you’re for or against capital punishment, presumably every person in the country is against killing someone who is innocent. So it starts a dialogue from a place that everybody actually can agree, and then it asks the questions [about], for example, bail and these other issues. I find it fascinating that we get to begin a dialogue with issues that every person agrees is a fundamental value, that your freedom shouldn’t be taken away without due process or due cause of some kind. So it’s a fascinating place to start the dialogue about these other issues. What does that mean for us? Whose responsibility is it to try to fix things that are broken? How to keep it from happening again? And so on.

AX: How did you wind up working with your fellow executive producers Danny Strong and Stacy Greenberg?

ELLIOT: Well, I had a very strong feeling that I wanted to work on a story that mattered to someone other than me, if you know what I mean. And I had a feeling that I wasn’t alone in that in our industry. So I knew Danny a little bit socially, but I was a huge fan of his work [Strong won Emmys for his telefilms RECOUNT and GAME CHANGE], and I felt like he did an amazing job of doing really smart political dramas, but also really fascinating and really entertaining commercial storytelling. So he was my first choice when I first started thinking about this, and he ended up being the only one I talked to about it, and the response I got from Stacy and from Danny, and the amount of work we put into it, and the passion we put in, it was awesome. I just never looked back. 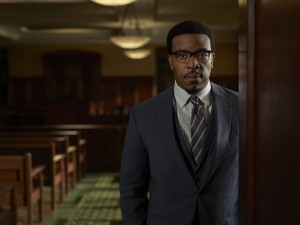 AX: Did they help you shape the story?

ELLIOT: Very much so. From the beginning, Stacy and I were on the phone all the time, and emailing all the time, and the same with Danny. Danny was on the East Coast, and I was in L.A., so it was constant emails back and forth, but they were very much involved, and they have so much experience, not only with television, but with television with this studio, and with this network, and so it was very, very helpful for us all to work together.

AX: Why is PROVEN INNOCENT set in Chicago? Danny Strong co-created EMPIRE, which airs on Fox, and is also made in Chicago. Is making it there to take advantage of the EMPIRE infrastructure?

ELLIOT: Well, I think that was helpful. Every conversation I’ve ever had in television is really a mix of creative and practical, because there is a sense of doing this so often. But for me, from a creative standpoint, the way that legal jurisdiction works with the state bar, I wanted it to be a state [like] Pennsylvania, that went from completely one type of America to another. Illinois had the same sort of north and south. I wanted there to be lots of different types of venues, and lots of different types of cases for us to work on. And also with a big urban city that had a less than perfect history of corruption, so that we could explore some of how we’ve gotten into the situation that we have with a lot of these cases.

AX: Did anybody say maybe you should call PROVEN INNOCENT something else because of possible confusion with Scott Turow’s novel and film PRESUMED INNOCENT, which is also set in Chicago?

ELLIOT: No. It’s funny, I’m such a Turow fan, but it just dawned on me.

AX: And what would you most like people to know about PRESUMED INNOCENT?

ELLIOT: I guess how varied it is, that the stories are part legal drama and part murder mystery and part political thriller and part private eye caper. The different genres and the different tones and the different real aspects of these almost real-life superhero lawyers is so interesting and so different than any other legal show that I’ve ever seen, that’s what I think I’m most excited about.