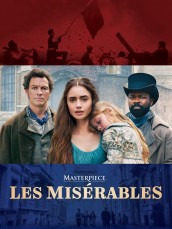 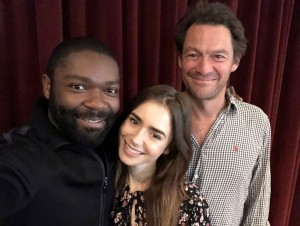 When most people think about Victor Hugo’s sprawling novel LES MISERABLES, originally published in 1862, they associate it with the hugely popular stage musical and its film adaptation. However, LES MISERABLES has been adapted as a straight drama on a number of occasions.

The newest version of LES MISERABLES, a miniseries originally produced by and aired on the BBC, begins airing in the U.S. on PBS MASTERPIECE on Sunday, April 14. Dominic West stars as reformed criminal Jean Valjean, trying to live a good life as he is pursued over decades by obsessed law officer Javert (David Oyelowo), with revolution in France looming in the background. The miniseries was adapted by Andrew Davies.

Actor West, originally from Yorkshire, England, spent four years in the U.S. on THE WIRE. More recently, he’s starred in the Showtime series THE AFFAIR, which airs its fifth and final season later this year. West’s AFFAIR character, the adulterous, substance-abusing Noah Soloway, is a far cry from LES MISERABLES’s self-sacrificing Jean Valjean. West has played a number of other conflicted souls – Valmont in LES LIAISONS DANGEREUSES (the National Theatre Live production), Hector Madden in THE HOUR, Richard Burton in BURTON AND TAYLOR – as well as outright villains, including the rapacious Spartan noble in 300.

West says of being cast as Valjean, “[David Oyelowo] gets people to approach him when they want a great, good man to be played. And people approach me when they want the opposite. And so I get a lot of villains. It was so refreshing to play a hero, who is a profoundly good man, and I only want to do that from now on. Living with Jean Valjean is a wonderful experience. Living with Noah Soloway is not. A few years ago, in one year, I played Fred West, the [real-life] serial killer [in the miniseries APPROPRIATE ADULT], Iago [in OTHELLO], and some other assh*le, and it was a really depressing year. These people get to you. And I’ve discovered that although making evil is more dramatic, it’s more easily made. The Devil has the best jokes, and it’s much easier to make evil interesting. It’s much more interesting to make good interesting. It’s much harder, and I think it’s well worth it, because at the end of the day, I really realized with this, that if you believe in the subject matter, and if you really believe it’s a story that needs to be told, and that will benefit people, it really makes a difference to your day, and getting out of bed, and your motivation.”

ASSIGNMENT X: In 2014, you played a real-life good guy in PRIDE, a gay rights activist who was also a workers’ rights activist. He seemed like a very warm character who did not seem to have a bad side. Did playing him sustain you for any amount of time, or …?

DOMINIC WEST: [chuckles] Actually, yeah. The guy I played is a good friend of mine now, so he’s real. My guy, Jonathan, was the second guy in the U.K. to be diagnosed H.I.V.-positive, and he’s still very much with us.

AX: Do people you seek you out for the darker parts, or do you seek out those characters? And were you surprised to be offered Jean Valjean?

WEST: No, I don’t seek out the darker parts at all, no. But I suppose once you play one, then that’s how people see you [laughs].

WEST: [laughs] Yes, exactly. It is tricky, especially with a part like that, where you have to be the villain for other reasons in order to make the hero more heroic, I suppose. But no, I wasn’t really surprised to be offered Jean Valjean. I don’t know what I thought. Well, I suppose I thought, “Well, it’s been done, in the musical and the film, and why are we doing it again?”

AX: Did you come up with a satisfactory answer for LES MISERABLES to “Why are we doing it all again?”

WEST: Oh, absolutely, yeah. To my amazement, it’s only ever been given a two-hour outing for the [most part]. I think the BBC did an adaptation in the ‘60s, but even that was only five half-hours. This is actually the longest adaptation of LES MISERABLES, I think, I don’t know about French television, but I think that’s probably ever been, and therefore there’s every reason to do it, because of the scale of the book, and because, as people have said, people think of it as a musical. And as wonderful a musical as it might be, there’s more to it.

AX: Had you read LES MISERABLES as a novel before you became involved with this version?

WEST: No, I’d never read it. I didn’t really know it. It never really crossed my radar. I did try and watch the film and didn’t get too far [laughs]. So no, I didn’t know it. I read it once I read Andrew’s scripts, which got me into it.

WEST: I suppose in any great, very well-written part, you respond to something in it that chimes with you, and a lot chimed with me in this, because the writing’s so great, it’s universal. It’s why it’s lasted this long.

AX: How do you see Valjean?

WEST: Well, apart from the physical – he’s got to be the strongest man in the world, and the greatest superhero ever – apart from that, the psychological difficulty for me was his guilt, the level of his guilt and his feeling of unworthiness. For a long time, I couldn’t understand how you could feel guilty about stealing a loaf of bread and being in jail for nineteen years. But of course, his psychology is so well-charted. It’s the psychology of someone who’s been incarcerated and believes they don’t deserve anything better, that they’re not worthy of being loved and giving love, they’ve been so starved of love and gentleness that they feel that they’re only worthy of prison life. And that’s why he surrenders himself to Javert three times, I think, and I could never understand why. You have to get into that different mindset.

AX: Valjean starts out with a beard of Biblical proportions. Did you have difficulty dealing with the beard?

WEST: [laughs] Actually, it did most of the work for me. Sometimes great hair and makeup does that for you, and costume. And it really did do a lot, that beard. You don’t really have to do anything with that, except that, with your eyes. The wig was far more trouble. The beard, I loved.

AX: How was it working with Derek Jacobi, who plays the Bishop of Digne, the first person to show kindness to Valjean? He’s not in it for very long, but …

WEST: Well, it’s a tricky part. If you hadn’t read the book, it opens with him, and what you realize is that Hugo has written the nicest, greatest man, the most virtuous, the most wonderful, the most compassionate human being who’s ever lived, in the Bishop of Digne, and you think, who the hell can play that? And there’s only one person who could possibly do it. He was actually supposed to be played by Max von Sydow. He was cast, and we were all going, “Max von Sydow, amazing.” But unfortunately, I think he broke his arm just before [shooting, and had to bow out]. Amazingly, we got Derek Jacobi, and you think, it couldn’t be anyone else. He’s a human being who exudes goodness in some way, and it was just wonderful acting with him. And watching him off-set as well – completely contained, slightly detached, not wasting his energy. It was a real education. He’s been a hero of mine for ages, but it was just bliss, acting with him.

AX: When you realized that there’s a large population that are confused about this LES MISERABLES not being a musical, what was your reaction?

WEST: No. It’s been interesting reading the reviews and the Twitter/social media stuff on it when it was airing in the U.K. For the first episode, people were, “Where are the songs? Can you hear the people sing – no, we can’t.” [laughs] But by Episode 2, they were with us. By Episode 2, people were going, “I’m in there.” Is it Episode 2 when Lily [Collins, who plays Fantine] has her teeth pulled out? That’s the scene when everyone went, “Right. I’m here now.”

AX: When you do play darker characters, do you get try to leave it all at work and then go home and be really kind to everybody in real life?

WEST: I think you have to, yes. The worst part was the Fred West part. Anyone who was ever involved in that case, or who wrote a book about it later, had a breakdown. So you have to be very careful with these sorts of characters, and with him, I think we shot the whole thing in three weeks, and it was in Manchester, and I could go home to London and be with my kids.

AX: Now that you’ve gotten to play Jean Valjean, can you imagine yourself in your later years, playing supreme good guy the Bishop of Digne?

WEST: Yeah, I’d love to. If it works out that well, then I’ve led a good life.