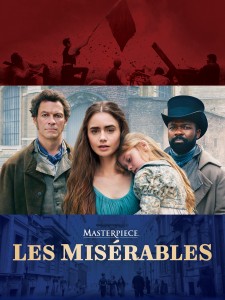 The new six-part drama LES MISERABLES on PBS MASTERPIECE, currently airing Sunday nights (it will repeat at an earlier hour in June), after premiering earlier this year in the U.K. on BBC1. David Oyelowo (pronounced “oh-YELLOW-oh”) plays the fanatical Inspector Javert. Oyelowo is also an executive producer on this non-musical adaptation of Victor Hugo’s massive 1862 novel set in France as revolution is brewing. Reformed convict Jean Valjean (Dominic West), a genuinely good man, devotes his life to helping others, but Javert is determined to track him down.

Oyelowo, originally from Oxford, England, was a regular on the British espionage thriller MI-5. His film credits on both sides of the Atlantic include SHOOT THE MESSENGER, AS YOU LIKE IT, THE LAST KING OF SCOTLAND, RISE OF THE PLANET OF THE APES, LINCOLN, JACK REACHER, LEE DANIELS’ THE BUTLER, NIGHTINGALE (for which he received both Emmy and Golden Globe Outstanding Lead Actor nominations, and was co-produced by Yoruba Saxon), SELMA, QUEEN OF KATWE, THE CLOVERFIELD PARADOX and A WRINKLE IN TIME. Oyelowo has also starred in the features CAPTIVE, FIVE NIGHTS IN MAINE, and A UNITED KINGDOM, all of which Yoruba Saxon was involved in producing.

Series adapter Andrew Davies says at a press session for LES MISERABLES that he had initially thought that it might be interesting to have a black Jean Valjean and a white Javert, but Oyelowo says he was only approached to play Javert. “We have seen the reverse of that dynamic numerous times. And the truth of the matter is, contrary to some popular belief, not every black man living in Europe in the early 1800s was some kind of slave or subservient in some way. Napoleon had black generals in his army, again, little-known fact. I am always looking for ways to shake things up for myself. And so what was actually of more interest to me was, I had had the opportunity to play a number of virtuous, good men in my career, and I was fascinated by this character who is so obsessed in his pursuit of another human being, down to what he deems to be his own moral compass, in a sense. He is not, in his own mind, a villain. In fact, he is the hero of his own story. In relation to Jean Valjean, I’m the righteous one. I’m the one doing God’s work. I’m the one who is the law keeper, the law abider. And that was a very fascinating thing for me to get to play, knowing, as David the actor and the fan of the book, that’s not necessarily how everyone else would perceive it. But how do you stick to that for six episodes? And that’s the opportunity that Andrew afforded, in that you have so much more context around that over the six episodes than you could ever have with the musical, as it were.”

It hadn’t occurred to Oyelowo before that he’d like to play Javert or that he’d ever be approached to do the role, he says. “But the thing that really struck me about him was his Old Testament quality, in relation to Jean Valjean’s New Testament quality. Javert thinks he is judgment. He is the law. He is what he deems to be righteous. And I think, on the other hand, Jean Valjean is hope. He is faith. He is the pursuit of redemption. He is love. And those two things not necessarily should be at odds, but they are in the context of this piece. It’s really interesting to find out that Victor Hugo based both Javert and Jean Valjean on the same person. This man, who he based his characters on, embodies these qualities, and that was the clue for me. And Javert sees himself in Jean Valjean, and it’s the part of himself he hates. Javert was born in prison to criminal parents, and that is part of his identity. So when he sees this man, who is the embodiment of that side of him he hates, he feels the need to destroy him. And that’s what he is going to do until that window through which he sees Jean Valjean turns into a mirror, and he realizes that the person he hates is himself, which is the reason he ends up destroying himself. So in many ways, those were the things that really drew me to this story.” 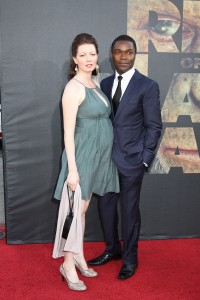 And then, in response to a question, Davies declares firmly that he hates the very popular musical version of LES MISERABLES.

“Noooo!” Oyelowo cries, and proceeds to expressively mime someone in slow motion trying and failing to prevent a terrible accident.

Later, Oyelowo discusses this and much more about the new LES MISERABLES.

ASSIGNMENT X: You’ve done press sessions for the new LES MISERABLES before. Had you ever before heard Andrew Davies say that he hates the musical LES MIZ?

DAVID OYELOWO: I’ve read it. I haven’t been there while he’s said it live.

AX: I’m wondering how they’re going to transcribe your reaction to that …

OYELOWO: I’m wondering, too. That was my inside voice coming out. [laughs] The truth of the matter is, there are many people who love the musical. And we want people who love the musical to watch the miniseries, because they’re going to get so much more context for these characters they love, and this story they love. Can I just say that I love the musical, for the record. But then there’s the other side – there are people who have read the book and love the book and don’t like musicals and haven’t seen any sort of tele-visual or cinematic rendition of it, and they also hopefully will get to see made flesh and blood those characters in this story that they love.

AX: You’re known for a lot of film work and a lot of stage work. You’re not so much known for television, though you’ve done some episodics here and there. Is this a form that you’d like to do more of, or is this a one-off, or how do you view it?

OYELOWO: No, it’s just the way things have gone. I just look for great material, and this was certainly that. The writing was indisputable, the story is indisputable, the iconic nature of the story is indisputable. So it’s less for me as to whether it’s TV or film, it’s more, am I going to be challenged by it, is it something that I feel could be good, to be perfectly frank. Probably a long-running series isn’t something I’m in a hurry to do yet, if I’m totally honest. But now, with cable and ten-episode arcs a year, there are all sorts of great ways to do television that doesn’t take you away from film and theatre, which is something that’s very important to me as well.

AX: Is part of what’s appealing to you about playing Javert, not just that he’s like this Old Testament burning bush fury, but that he’s got these issues of projecting his persona onto another man, and the self-hatred, and the unawareness of the self-hatred?

OYELOWO: Yes, exactly right. I think that’s the thing that makes a character truly interesting, is when you watch them in real time finding things out about themselves, and about the world around them, especially when those things are at odds with their own beliefs. Because I think that, again, is what it is to be a human being.

AX: Have you seen any of the previous non-musical film versions of LES MISERABLES?

OYELOWO: No, I didn’t, and to be perfectly honest, one of the things that appealed to me so much about LES MIZ, when you think about this 1,500-page novel, to boil that down to two hours of a film, it just seems inconceivable to me, in a satisfying way. I think with a musical, by virtue of that form, you know that you’re kind of seeing something in more primary colors. It’s more of a riff on the story, as opposed to the meat, but that was the thing I felt reading these six episodes, is that, my goodness. It’s actually extraordinary, talking to Andrew, because you’re still going, “I still don’t know how you did it. I’m talking to you right now, and I don’t know how you took this tome and distilled it down to these six episodes.” That to me is the satisfying thing, that it’s more than just what a film can afford you as well.

AX: Had you worked on an Andrew Davies script before?

OYELOWO: No. It’s the first time I’ve seen a lot of him, obviously.

OYELOWO: I have a production company, Yoruba Saxon, but I’m on this as a freelance EP. One of the main things I did was bring [LES MISERABLES] to PBS, was to make that happen, because I was very keen to make sure that the North American roll-out was robust, and was going to be one whereby people who may not otherwise see this story will get to see it.

AX: Did you have a preexisting business association with MASTERPIECE executive producer Rebecca Eaton?

OYELOWO: Yes. Because we’d worked on SMALL ISLAND together, and we’d become friends doing that. And the truth of the matter is, [the producers of LES MISERABLES] considered a lot of companies, and we wanted to make sure we went with the company who was going to have it be one of their flagship shows, a place where they were going to get the word out. There are so many channels now, there are so many outlets doing great work, and to peak your head above the crowd is something that requires passion, belief, money, and intention, and this was the place that felt like our show was going to get the best treatment.

AX: What else are you working on right now?

OYELOWO: I’m about to direct a film called THE WATER MAN. We start that in May. That’s a story about a young boy who’s looking for this mythic figure who he believes can save his mother from cancer. That’s going to be my directorial debut, so I’m very excited about that. That’s [being produced by] Yoruba Saxon.

AX: And what would you most like people to know about LES MISERABLES?

OYELOWO: Well, that the story they already know, but maybe don’t have the full context of, I believe we bring that context, and the musical that people love, they are going to see more depth than maybe they knew was there. And for those who know nothing about LES MIZ, it’s a timeless story that really looks at one man’s journey towards redemption and hope through real adversity, and I think that’s a pretty universal story. [And another] man’s descent from what he deems to be the moral compass into a reflection of himself as actually being amoral in relation to this very moral man.