The actress talks about the 1990s set series 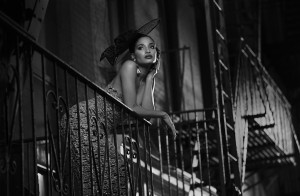 On FX’s POSE, now on Tuesday nights in its second season, Indya Moore plays Angel. In Season 1, set in 1987 New York, Angel left the House of Abundance headed by Elektra (Dominique Jackson) to join Blanca’s (Mj Rodriguez) newly-formed House of Evangelista. For awhile, Angel had her own apartment, courtesy of her status as the mistress of married young businessman Stan (Evan Peters), but it didn’t work out. Angel, sadder and wiser, returned to Blanca’s House.

In Season 2, it’s now the ‘90s. Things are looking up for Angel, as her supermodel looks are paving the way for a supermodel career, although she is hiding her transgender status from her agent and employers.

In real life, transgender rights activist Moore is a model who recently graced the cover of Elle Magazine. Moore, originally from the Bronx, has also appeared in Vogue and in the film SATURDAY CHURCH, which also features her POSE colleague Rodriguez. Moore has founded Beetlefruit Media, which is producing the series MAGIC HOUR.

ASSIGNMENT X: Were you familiar with the ballroom scene before you were cast in POSE?

INDYA MOORE: Yes, I was. I am familiar with the ballroom scene.

AX: Can you talk about the difference in performing for the camera in POSE and performing when walking a ball?

MOORE: The show is really not about the ballroom scene, it’s about family, and a group of people navigating what family and love is. The show covers LGBTQ people. In that era, LGBTQ people navigating family and love were most likely involved and engaged in the ballroom scene as a really important part of their lives, because it was the only space that provided that family and love that the subjects in the show were in pursuit of. So as far as the performance aspect [in POSE], there is a lot more acting with interactions with other people, and less ballroom. It’s more like interpersonal interactions with people outside of ballroom than it is in there, but it’s very much the same. As far as walking the balls, in the show, it’s very similar to the way balls would be held outside of the show. You’re giving it your best to get on that runway, and you give it what you got.

AX: POSE is one of the few TV shows, if not the only show, where most of the regulars are transgender characters of color played by transgender performers of color. Do you enjoy that aspect of POSE?

AX: Do you have a lot of input into how Angel is written, or do they just give you the scripts and you bring her to life?

MOORE: Well, Angel’s life story is a reflection of so many young trans women. It’s very, very similar to what trans women go through as far as finding love, and having issues with feeling desired. So like a lot of these things having to do with the way Angel navigates her life with her gender, it’s very similar to the way a lot of other trans women navigate. 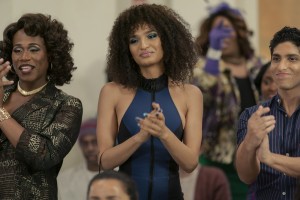 AX: Do you think in Season 1, Angel was trying to validate some part of her identity by going for Stan, a very conventional straight guy who’s not part of the community?

MOORE: I don’t think Angel was looking for a straight guy, or anyone of a particular sexuality. I think straight men are actually into women like Angel, because she’s a woman. I think the fact that she is different adds to the kind of woman that she is, and it brings substance to her life story, and I think that the issues that she has navigating life as a trans person, but I think Angel is just someone who wants to be loved, she’s not looking to validate herself with anyone, with men. When we speak in terms of validation, is this a question that we ask cis women? Are cis women looking for validation in the relationships that they have with men? Is this something that we do as human beings, that we look for validation when it comes to the relationships that we have with other humans? I think this is something that, in some ways, I’m pretty sure, it’s validating for Angel to be loved for the woman that she is, but I think what makes Angel so unique is that she doesn’t need a man to validate her. She doesn’t need a man in her life, or anyone, to make her feel what she already is. It’s a really interesting question. It’s really important that you asked that. Because I do feel like as human beings, we look for validation in the relationships that we have with people, but at the same time, I think from the aspect of Angel’s sexuality, she’s not looking for validation. As far as her gender is concerned also, she’s not looking for validation.

AX: Well, it just seems like Angel is a very spectacular person, and she falls in love with a guy who’s kind of ordinary …

MOORE: Yeah, that’s the thing. Angel is already valid. Angel already validated in her own understanding of herself. So this is why she’s having the issues that she has with Stan. She was pushed to deal with the fact that he’s in a relationship with another woman, but as more issues started to arise, it started to become something that wasn’t what Angel deserved. And she was aware of that. And someone who is already validated, who validates themselves, would be able to see that, “Okay, this is not a situation that is meant for me.” She loves herself enough to walk away from something she does not deserve. 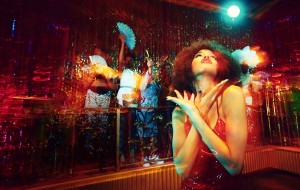 AX: Not asking for Season 2 spoilers, but do you have a favorite episode or scene from Season 1?

MOORE: Oh, my God [having trouble choosing]. I want to say the episode that Janet Mock directed [“Love Is the Message”] was my favorite episode. It had nothing to do with my character, and everything to do with just the way I think the story went, exploring Pray Tell’s [the ballroom commentator played by Billy Porter] inner battles, and what he was going through as a person who is living with HIV, but also is losing someone who has HIV. This person that is closest to him with HIV is the only reflection that Pray Tell has to identify with himself as someone with HIV, and this person is dying. So Pray Tell is afraid for his life, and is behaving in ways that the House is concerned about. And everyone is like, “Oh, Pray Tell, you should do this,” “Oh, Pray Tell, you shouldn’t do that.” And I thought that it was really interesting to see how the intentions of the House members surrounding Pray Tell were to care and love him, but it was in a way too policing. It was interesting to explore that even though someone may have good intentions, it doesn’t make what they’re doing totally right. And it was great to explore that and see how Pray Tell was able to explain himself, like, “Hey. These decisions that I’m making, they’re not just coming from nowhere. I’m going through something, and you need to allow to the space to express myself, and to do what I need to do to express what it is that I’m going through.” “Love Is the Message” is a song that Pray Tell kept on playing in the ballroom, and everyone had an issue with it, but it’s a message I think that Pray Tell wanted to spread out, even though people were just annoyed with it. So that was one of the components that I really appreciated about the episode. It made me think.

AX: And what would you most like people to know about POSE Season 2?

MOORE: Well, that POSE is going to come on stronger, the performers are going to come on stronger, everything is going to be stronger, the storylines, everything is going to be tenfold more amazing. Everything that we loved about POSE is zeroed in on and expanded in Season 2. And also, we’re going to see so many different directions in how people’s lives can go. I’m looking forward to exploring how the lives of trans people, and people of color, and queer people of color don’t always amount to disparity, that they can amount to prosperity, that good things do happen for queer people of color and trans women. So I’m looking forward to discovering a little bit more of what that could be in Season 2.

This interview was conducted at Fox Networks’ and FX Networks’ party for the Television Critics Association (TCA) press tour.