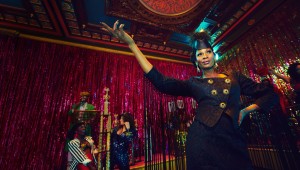 In POSE, now in its second season on Tuesday nights and renewed for a third, we’ve jumped ahead a few years, from the late ‘80s to the ‘90s. Dominique Jackson plays perennial ballroom star Elektra. Originally the mother/founder of the House of Abundance, Elektra lost the financial backing of her lover when he objected to her gender reassignment surgery (he wanted a woman who still had male genitalia). For awhile, Elektra took refuge as part of the House of Evangelista, run by Blanca (Mj Rodriguez), formerly Elektra’s daughter in the House of Abundance, who struck out on her own.

This season, however, Elektra has found a way to make a good living. She bids a rude goodbye to Blanca and proceeds to start anew with the House of Wintour. In the ballroom scene, Elektra is a champion, and she can be dismissive or outright abusive to her competitors and anyone she views as inferior. However, when Elektra shows vulnerability, it’s enough to invite forgiveness from us all.

Elektra is Jackson’s first major role. In real life, the transgender actress explains, she has long been part of the New York ballroom scene.

ASSIGNMENT X: So when you joined POSE, you already knew how to do the ballroom walk and the hand gestures and all of the movements associated with walking a ball?

JACKSON: Those things came very naturally to me. [POSE] was in a different period, but adjusting to the period was not that difficult, because I am a daughter to many of the pioneers, the transgender women that are pioneers of the scene.

AX: Is Elektra based on any one real person?

JACKSON: Elektra, as magnificent as she is, could never be based on one person [laughs].

AX: How much of Elektra is a creation of the writers, and how much is your input?

JACKSON: It’s all a team effort.

JACKSON: No, when I heard of POSE, I thought that it was about time that our culture was brought to light, that people understood that while they were in the art and literary scene in the ‘80s, and while they were dealing with the rise of the Trump era, that there were these people that were surviving, and struggling to live, and living lives. So it was just something that was awesome for me, it was phenomenal, it was like, “Yes! I want to tell this story.” 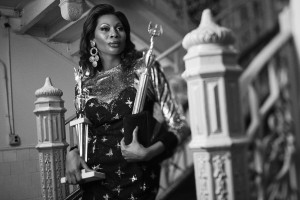 AX: It struck me that POSE is one of the first stories I’ve seen about transgender women where everybody is depicted as being intelligent and having goals, rather than either terribly tragic or really dopey.

JACKSON: Well, one thing that [POSE co-executive producer/writer/director/transgender activist] Janet Mock said is that she wanted people to see trans women in the lives that we live, in our bodies, not a story that made people want to understand, “Okay, she’s this or she’s that,” that saw us already existing. And again, [POSE co-creator/exec producer] Mr. [Ryan] Murphy is genius.

JACKSON: I love the ‘80s fashions. I admired and always loved Diahann Carroll as Dominique Devereaux and Joan Collins as Alexis Carrington [on DYNASTY]. So when I saw that being brought back, and that is exactly what the women in ballroom idolized, and what they did. So when you saw these women in the late ‘80s – I came into the scene in the ‘90s – they had already manifested and embodied these amazingly feminine, gorgeous yet strong female characters.

AX: How do you find Billy Porter as Pray Tell, the ballroom emcee?

JACKSON: He’s the commentator. Ballroom commentators are extremely important. Billy Porter has really embraced that character. He has really brought it to life, and all of the [real-world] ballroom commentators, from what I know, are really impressed and honored that he was able to take this role and make it so magnificent and bring the authenticity to it.

AX: In real life and on the show, who are the ballroom judges? Are they people who have walked the balls themselves, or …?

JACKSON: Well, in ballroom, when you walk the category, the judges are the ones that pick the winner. There have always been people who have been pioneers to the ballroom scene, some of them, but everyone on that panel has been a part of ballroom for a very long time. They’re all committed to ballroom. When you get to a certain point, it’s not about competing, it’s about just showing up, representing, and allowing the younger ones to give you praise and be grateful for the fact that you paved the way.

AX: Can you still walk a ball, or are you too iconic because of POSE?

JACKSON: No, I still walk. At the Coldest Winter Ever in January 2018, I walked with a team, two young women that I totally admire, and we actually won. The category was the Tundra.

JACKSON: Oh, camera is much easier than performing in the ballroom [laughs].

AX: Because you have a little more freedom of interpretation on the set?

AX: What would you most like people to know about POSE Season 2?

JACKSON: There’s nothing I can say about Season 2 [this interview was conducted before Season 2 premiered and Jackson is wary of spoilers].

AX: Can you say if you’re having fun?

JACKSON: I’m having a great time.

This interview was conducted at Fox and FX Networks’ party for the Television Critics Association (TCA) press tour.