The actress talks about her role in the glamorous series 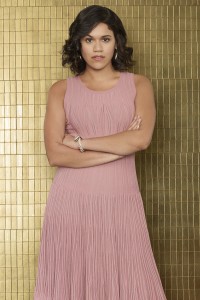 Adorno spent her childhood in the Bronx and her adolescence in South Carolina. She moved to New York to pursue an acting career, landing several commercials and then a regular role in the series SEVEN SECONDS. Adorno is also a director, having co-helmed the short TRAPPED.

ASSIGNMENT X: GRAND HOTEL is the kind of drama where every character has their own trajectory. Is Yoli’s journey about coming into her own, out from under her sister and her mother’s dismissiveness?

JUSTINA ADORNO: I love that question, and yes, I think so. Yoli, this season, definitely comes into her own, and I can’t wait for everyone to see it.

AX: Does Yoli have a romantic arc with anybody? It looked like she might have one with the hotel’s guest rock star, El Rey, played by Jencarlos Canela. But after Carolina seduced El Rey, then announced it as publicly as possible, that seems less likely …

ADORNO: [enigmatic] I don’t know. I think you might have to tune in to find out.

AX: And can you say in the broadest of strokes if Yoli gets involved in any of the many mystery storylines in GRAND HOTEL?

AX: Had you worked with or known your executive producer Eva Longoria before?

ADORNO: Absolutely not, but I’m so grateful that I am. Eva’s been amazing. She’s been like a second mother, a second sister. She’s so hands-on, it’s been a beautiful experience, honestly.

AX: It’s a very glam show. Yoli is not supposed to be …

AX: Well, Yoli is still pretty glam, just maybe not as much as her mom and her twin. Do you like having that heightened look? Is that just sort of feeling like you’re wearing a lot more makeup than normal, or …?

ADORNO: Oh, definitely. Yoli – we’re similar, but we’re very different. Definitely, the glam life is not Justina, but it was really cool to get that perspective, and still know that, even though the family is glam, you may not necessarily fit into that, even though you do it. I related to her in that way.

AX: How is working with Rosalyn Sanchez, who plays Yoli’s mom?

ADORNO: Oh, my God. It has been beyond my wildest dreams to work with Rosalyn, especially her [playing] my mother. I grew up watching her movies, and I never thought that I would, one) meet her, two) play her daughter. So it’s been amazing. I’ve learned so much for her. 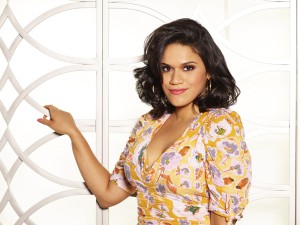 AX: And were you aware of Demian Bichir as an actor before you became involved with GRAND HOTEL?

ADORNO: Honestly, I was not. But let me tell you, everything that anyone’s ever said about him, he lives above and beyond the expectations. He’s such a great actor, so funny on set. It’s been a blast.

AX: How is it playing opposite Feliz Ramirez as Yoli’s fraternal twin?

ADORNO: Amazing. It’s such a treat to come to work whenever Feliz and I do our scenes together. It’s effortless, and I hope that comes across to the audiences.

AX: The pilot/opening episode for GRAND HOTEL shot at the Fontainebleu in Miami, and then production was moved to Los Angeles for the rest of the season. Is there any difference between working in Miami and working here in L.A.?

ADORNO: Absolutely. I’m grateful that we started there, because we actually stayed at the Fontainebleau, and it really grounded us with getting that familiarity of living at a hotel, and waking up, and being a part of that energy. So we definitely were able to translate Miami to California. There was definitely a big difference, but our set designers did an incredible job. It literally felt like we were there.

AX: Does Yoli have a set for her own suite in the hotel, and if so, do you feel ownership of that set?

ADORNO: [laughs] I do. I felt that way even at the hotel where we shot the pilot. I was like, “This is our hotel.” So I definitely felt ownership with the room. I’ll say that there are a lot of scenes that happen in Yoli’s room. You get to learn more about her.

AX: Have you gotten to make any suggestions about Yoli, how she talks, or what she wears, or …?

ADORNO: The writers and the producers do a really great job with making sure we’re on the same page, but they’re always open to suggestions. I feel like we just understood each other, so there’s been very little of that, but yeah.

AX: And what would you most like people to know about GRAND HOTEL?

ADORNO: That they need to watch it on Monday nights. It’ll be worth it.

Related: Exclusive Interview with star Demian Bichir on the American remake of the hit Spanish series