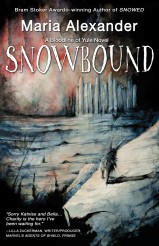 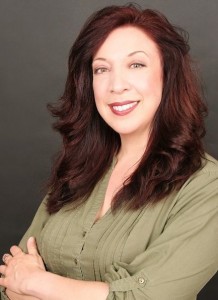 What with NOS4A2 making Christmas in July scary again on TV, this seems the ideal time to pick up Maria Alexander’s novel SNOWBOUND. This is the second in Alexander’s Yuletide trilogy, following her Bram Stoker Award-winning SNOWED. While it is advisable to read SNOWED before SNOWBOUND (and SNOWED is excellent in its own right), it’s not absolutely necessary. Alexander brings us up to speed without repeating herself.

SNOWBOUND is told in the alternating first-person voices of Charity Jones, a brilliant just-out-of-high-school engineer now doing government work, and Aidan, who’s got a more unconventional life history. Aidan is the son of the Klaus, aka Santa Claus when he’s good and Krampus when he’s bad. The Klaus hasn’t been good in ages. Aidan is the heir apparent to Klaus’s throne, but that’s assuming his father doesn’t kill him first. All Aidan wants is to get back together with Charity, and all Charity wants is to rescue Aidan from the Arctic fortress of his father. Charity rounds up a small group of friends and sets out on a quest with them to find Aidan, unaware of some key events in his world. Complicating matters further is Charity’s psychotic brother Charles. 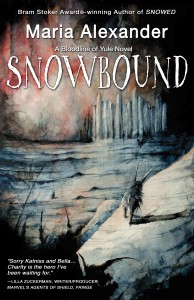 Alexander has researched her lore extensively, weaving it naturally into events and the characters’ observations. We can see and even almost smell the creatures and settings she describes, and there’s a consistent internal logic weaving everything together. The author also does a fine job of differentiating the voices of her characters: Charity is modern, determined, impatient, while Aidan is a classical hero, owner of a worthy heart but beset by self-doubt. Charity’s friends are good company, and Charles is a villain who sounds like the snotty teen he is, yet still manages to be persuasively scary.

There’s also some plausible technology, set up in the previous novel, which both furthers the plot and enhances Charity as a character, giving her substance beyond the love story; we believe her as an enthusiastic inventor.

One minor gripe is a romantic misunderstanding that propels some of what follows. The ensuing drama is suspenseful, but it’s possible to wish this fulcrum was as original as everything that surrounds it.

By the end of SNOWBOUND, Alexander answers some questions about Aidan’s very existence. At the same time, she uses those revelations to craft a well-supported cliffhanger.