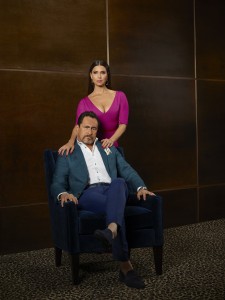 ABC’s new drama GRAND HOTEL, debuting Monday, June 17, is based on the Spanish series GRAN HOTEL. The original has been remade in a number of other countries around the globe, including Italy, Mexico, and Egypt. The American iteration, which has Eva Longoria as one of its executive producers, is set in Miami, Florida.

Demián Bichir stars as patriarch Santiago Mendoza, owner of the Riviera Grand, billed as “the last family-owned hotel in Miami.” Santiago has his hands full with his family – his two grown children by his deceased first wife (played by Longoria in flashbacks), his current wife Gigi (Roselyn Sanchez), her two grown daughters – and with the hotel, which has financial difficulties, as well as a lot of secrets.

Bichir, originally from Mexico, is a filmmaker as well as an actor. Longoria starred alongside him in the feature UN CUENTO DE CIRCO & A LOVE SONG, which Bichir directed and produced. Bichir was nominated for a Best Actor Oscar for his performance in 2011’s A BETTER LIFE. His other films include Steven Soderbergh’s CHE (as Fidel Castro), Quentin Tarantino’s THE HATEFUL EIGHT, Ridley Scott’s ALIEN: COVENANT, THE NUN, and the upcoming GRUDGE and GODZILLA VS. KONG. Bichir has long been a star in Mexico. In the U.S., he starred in both seasons of FX’s THE BRIDGE and costarred on HBO’s WEEDS.

Asked at a Q&A session for GRAND HOTEL if he is returning to American TV for this series specifically, or because he wanted to do more American television in general, Bichir replies, “This is my third time on American TV. Basically, I respond to the same thing. I’m always looking for strong material, whether it’s on TV, films, or theatre. And that’s what I found here. To me, it’s about the human experience and who’s in charge of it. And I love Eva. I can’t say no. No one can say no to Eva. A great, powerful captain can lead such a big ship into a happy port. The beauty of that is that they can gather the best artists on every position, not only in the fantastic cast that we have, but in every department. So that, to me, is what I’m looking for as an artist. I couldn’t be happier and luckier to do [this] project with this family.”

Speaking about the character of Santiago, Bichir says, “I always try to go from one extreme to another. You’d be surprised how many times you’re offered to play the same character over and over again, sometimes with the same name and the same lines. You’d be surprised how much of that you find. And so, to me, this was really powerful and important for many reasons. And one of them is exactly that I have never played a character like this, but also, because this man has worked his way up with a lot of hard work and honest work, and so everything he has, he earned it. I know many, many stories like that, of many Mexicans that have made it here in a big way. And this is a tribute to them, and to everybody who’s over here who’s been crossing the border to make this country better.”

Asked to contrast his first, early experiences with the U.S. film and TV industry with his current ones, Bichir relates, “My mother called me pata de perro [dog’s leg]. I could never stand in one place, I could never stand still. So I’ve been moving a lot. Any my equation is really simple. I go where I’m loved. And wherever there’s a good project for me, I will fight for it, I will try to open new avenues. And yes, the first period of time that I spent here [in Los Angeles] many years ago, there weren’t many things for Latin American artists. There are a lot of people responsible for now having this beautiful time that we’re having, and Eva is one of them, without a doubt. She opened up a full, new opportunity [on GRAND HOTEL and her previous projects as a producer] for many Latin American actors. She has a great relationship with ABC, and she could have chosen any other show, any other story she wants, because she can do anything she wants. She’s Superwoman. She’s not only a great actor and a great producer, but she was becoming a mother at the same time she was giving birth to this series. And she was juggling all those [bowling] pins at the same time. So she is opening these opportunities to many of us. Without a doubt, this is a good time for us. And this is a great time for [GRAND HOTEL’s] story, because this is a story of success of an immigrant family coming into the U.S., living this wonderful life.”

Directly after the panel, Bichir makes himself available for a follow-up discussion. 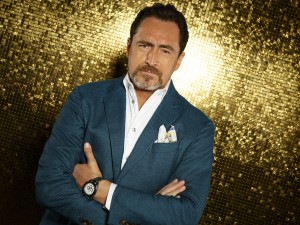 ASSIGNMENT X: When did you meet Eva Longoria? When did that professional relationship begin?

DEMIAN BICHIR: We met at an event. And then I sent her [the script for UN CUENTO DE CIRCO & A LOVE SONG], because I wanted her to play a part in my film, and she said yes without reading it. And I asked her, “Please, read it, and get back to me.” And then she read it, and said, “The answer’s still yes.” And so that’s how we connected, and I found an incredibly generous peer in Eva. She helped us to do that film, and as I said, she is one of those iconic figures in the Latin American community that people actually listen to. And she’s incredibly smart. So as I said, you can’t say no to Eva.

BICHIR: Me and my family have done many things together. We have done theatre together, films together, and it’s always really interesting how love works. Sometimes it’s for good, and sometimes it’s a lot of pressure, too. So I don’t think this is any different from that, because you will see this family with an enormous extension of it, because the whole hotel becomes a family. We are all that family, and every member of the family matters. And the wonderful thing about this story is that every member of this huge, enormous family, they have their own secrets, whether they’re small or very big and dark. And once you discover one of those secrets, that affects everybody.

And then, the people who are close to you are the ones who have a bigger responsibility to function properly in such a big business like our hotel. So [Santiago] has that pressure, and he knows that, and that’s probably why he will have those issues that he has to deal with. We all have to take care of every member of this huge family, whether they’re in the kitchen or in my room, in our suite, in our closest family, because we depend on each other. And if any one of us gets down, we all go down.

AX: Do you have a sense of ownership of the hotel set? I mean, do you come into the set and go, “Mine”?

BICHIR: [laughs] I have to own the part, yes. Not only the hotel, but the part.

AX: How is it playing opposite Roselyn Sanchez, who portrays your onscreen wife?

BICHIR: Well, she’s been one of the happiest discoveries I’ve ever encountered, because I always heard of Roselyn Sanchez, but I never had the chance to meet her. And then doing this together, you can’t do such a big show with the wrong people. This cast has been fantastic. Roselyn has not only been my wife in the show, but my partner in this adventure. We rely on each other, and she’s incredibly generous and smart, and you want that on your teammates. And it’s been a joy. And she’s so good in this show that people will be blown away.

AX: What would you most like people to know about GRAND HOTEL?

BICHIR: I think this is the golden era of TV. And with so many offers out there, with so many beautiful, fantastic shows out there, they will find something different here, something fresh and different, where there’s a little bit of everything for everybody. This is like a universal show that everyone can relate to.