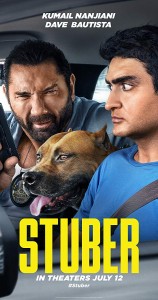 STUBER pairs Dave Bautista and Kumail Nanjiani in a buddy action comedy. Given the track record of both performers, especially Nanjiani, STUBER feels like it ought to be funnier. It’s agreeable in a LETHAL WEAPON knockoff way, and its leads are both deeply likeable. It’s just that few of the gags land in the way that seems intended.

When Vic has Lasik surgery, he gets a tip that Teijo is back in L.A. Vic is hardly the type to let something like temporary near-blindness slow him down. After a brief, definitively unsuccessful attempt to drive himself fails, Vic makes his first call to Uber and gets Stu. Vic apparently doesn’t get the concept of a civilian driver in this context. He treats Stu as a conscript in Vic’s personal war. Stu is horrified but also fascinated by the world of cops and robbers that takes over his previously mundane existence.

Because the extraordinarily muscular, growly Bautista and the modern, hyper-articulate Nanjiani play people who seem to come from different universes, there is something inherently amusing about their interactions.  We easily warm toward both of them. Bautista has an offhand sincerity that makes us trust him, as well as a physicality that makes us want to be on his side (we certainly wouldn’t want to make him mad). Nanjiani has a sweetness and an intelligence that are infallibly charming. So we don’t mind hanging out with these guys.

Uwais, who has demonstrated near-supernatural martial arts gifts in the RAID films, is not given the opportunity to fully show what he can do here, although he exudes the gleeful malevolence called for by his role. Natalie Morales isn’t given much to do but does it with conviction as Vic’s sculptor daughter.

In an earlier era, Stu would have simply been a taxi driver. In fact, in a way, STUBER is the comedic version of Michael Mann’s 2004 COLLATERAL. Nanjiani’s Stu is a jumpier, snarkier person behind the wheel, and Vic is a righteous police detective instead of a ruthless hit man, but it’s the same general setup. STUBER, however, is not intended as a parody, but as a comedy. It settles into its groove so quickly and with such familiarity of premise and characters that, were it not for the blood, it could be mistaken for a sitcom. The jokes mostly prompt grins rather than laughs. STUBER is not unpleasant, but it feels like something we’ve seen before, and often.